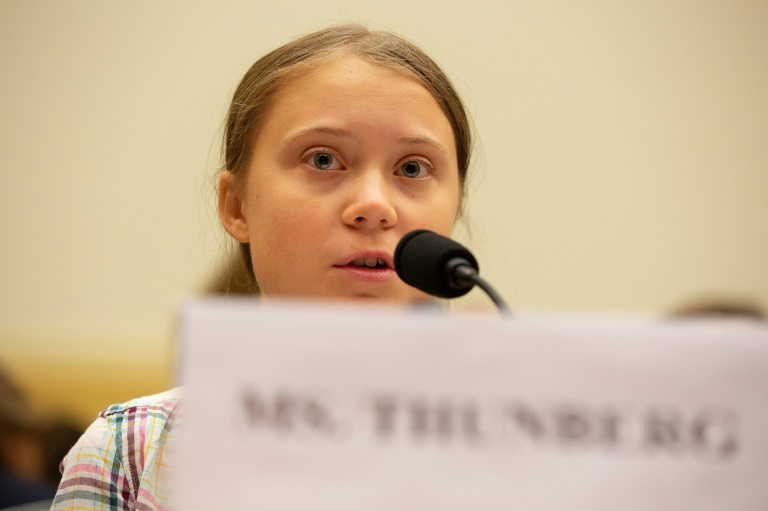 Swedish teen environmental activist Greta Thunberg brought her demand for immediate action on climate change to the US Congress, where she urged lawmakers on both sides of the political aisle to unite behind climate science. (Photo: AFP)

Teen activist Greta Thunberg took her climate change fight to the US Congress Wednesday, imploring the nation's lawmakers -- several of whom are global warming skeptics -- to "take real action" to avert environmental disaster.

The 16-year-old Swede was joined by other campaigners who said looming uncertainty caused by inaction over climate change has led younger generations to question the intentions of today's political leaders.

Thunberg arrived last week in Washington, where she has maintained a busy schedule: demonstrating in front of the White House, attending an event with US senators and indigenous leaders from South America, and, later Wednesday, meeting with children who are suing the government for climate inaction.

On Monday, she sat down with former president Barack Obama, who hailed her as "one of our planet's greatest advocates," and she received an "ambassador of conscience" award from Amnesty International.

In Wednesday's appearance before a joint hearing of two House committees, her message was humble but blunt.

Congress has been all but paralyzed on a path forward to mitigate climate change in recent years.

President Donald Trump has openly questioned the effects of a changing climate, and his Republican administration has rolled back several Obama-era regulations that were aimed at reducing industrial pollution, cleaning US waterways and protecting federal lands.

While congressman Garret Graves acknowledged that "we need to take aggressive action," he said it was critical to make "sure we're moving forward based on facts."

He and other Republicans also stressed that the world's second-largest economy, China, needed to take dramatic steps to stem its own carbon emissions.

Beijing was given an "inappropriate" pass in the Paris climate accord because it allows China to have a 50 percent increase in its emissions by 2030, even as the United States is limiting its emissions, Graves said.

The Trump administration abandoned the Paris accord in 2017.

Seventeen-year-old Jamie Margolin, a co-founder of the group This Is Zero Hour, pointed a finger directly at US lawmakers, accusing them of being in bed with corporate interests including the fossil fuel industry.

"You're promising lies," Margolin said, referring to those who insist she and others like her will have a bright future despite climate change.

Young advocates before Congress "pleading for a livable earth should not fill you with pride -- it should fill you with shame," she added.

Lawmakers have spent countless hours with lobbyists for corporations that are "making millions of dollars off of the destruction of my generation's future," she said.

House Democrats like Foreign Affairs Committee chairman Eliot Engel applauded Thunberg and her fellow activists, saying lawmakers "owe it to them to do what we can now to make sure that the world is saved."

But he also noted that "there are so many" in Congress who still deny the science behind climate change.

Benji Backer, a 21-year-old conservative blogger and climate activist who testified, had a message for conservative lawmakers: "the climate is changing," and they must embrace "reasonable" approaches to addressing it.

He also offered Trump a message: "Climate science is real, it's not a hoax," Backer said.

"I urge you to accept climate change for what it is, and to act accordingly."