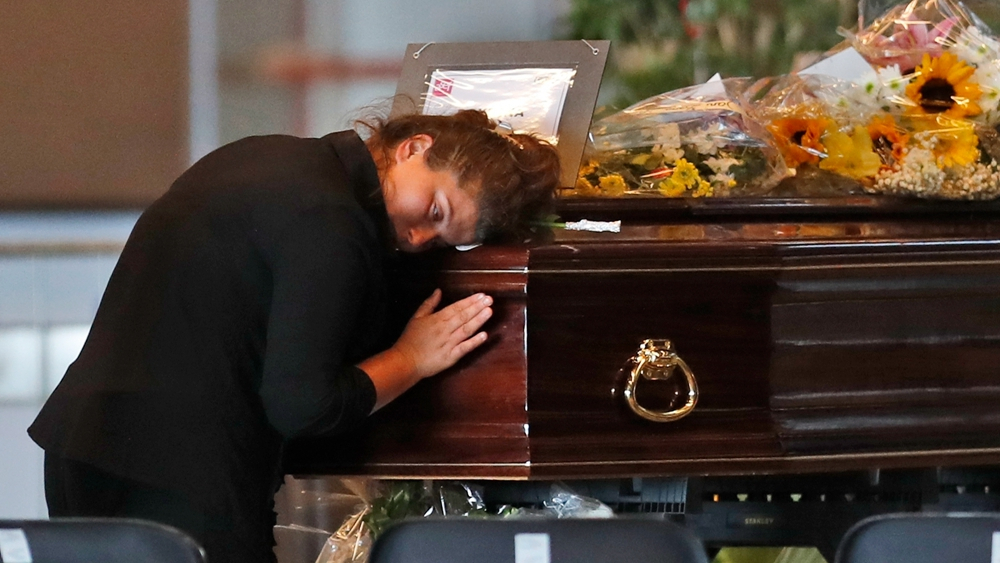 A state funeral will be held on Saturday at a hall in Genoa for the victims of Italy’s bridge disaster, coinciding with a day of mourning.

Grieving relatives wept over the coffins of dozens of victims of the collapsed Morandi Bridge on Friday, while rescuers pressed on with their tireless search for those missing in the rubble.

The collapse of the bridge, a decades-old viaduct that crumbled in a storm on Tuesday killing at least 38 people, has stunned and angered the country, with Italian media reporting that some outraged families would shun Saturday's official ceremonies.

Italy's government has blamed the operator of the viaduct for the tragedy and threatened to strip the firm of its contracts, while the country's creaking infrastructure has come under fresh scrutiny.

Relatives who gathered at the hall on Friday embraced and prayed over lines of coffins, many adorned with flowers and photographs of the dead.

But according to La Stampa newspaper, the families of 17 victims have refused to take part, while a further seven have yet to decide whether they will attend.

"It is the state who has provoked this; let them not show their faces, the parade of politicians is shameful," the press cited the mother of one of four young Italians from Naples who died.

The father of another of the dead from Naples took to social media to vent his anger.

"My son will not become a number in the catalogue of deaths caused by Italian failures," said his grieving father, Roberto.

"We do not want a farce of a funeral but a ceremony at home."

The populist government has accused infrastructure giant Autostrade per L'Italia of failing to invest in sufficient maintenance and said it would seek to revoke its lucrative contracts.

Interior Minister Matteo Salvini demanded that the company offer up to 500 million euros ($570 million) to help families and local government deal with the aftermath of the disaster.

The dead also include children, one as young as eight, and three Chileans and four French nationals.

Despite fading hopes of finding survivors, rescue workers said they had not given up as they resumed the dangerous operation to search through the unstable mountains of debris.

The civil protection service said Friday evening they were searching for five missing people – down from 10–20 thought to be missing on Thursday.