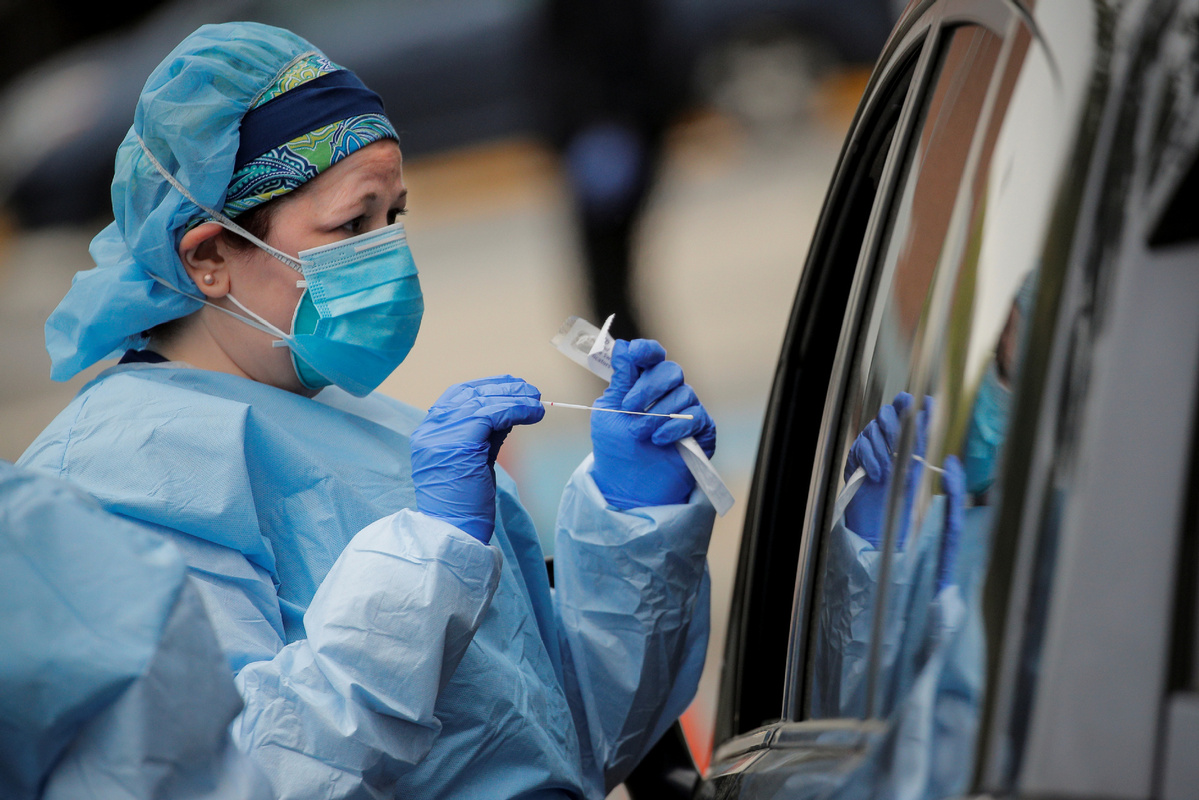 Nurses work at a drive-thru testing site for the coronavirus disease at North Shore University Hospital in Manhasset, New York, May 6, 2020. (Photo: Agencies)

With the number of COVID-19 deaths topping 70,000 in the United States, the federal government has come under increasing pressure over its handling of an outbreak that accounts for more than a quarter of the reported worldwide loss of life to the virus.

Deaths in the country reached 71,078 early on Wednesday, according to the Center for Systems Science and Engineering at Johns Hopkins University.

After weeks of shutdown measures, many US states have begun to slowly open up. But health experts have expressed concerns that premature moves could lead to a spike in new infections.

Vice-President Mike Pence confirmed on Tuesday that the White House will wind down the coronavirus task force at the end of May after a forecasting model often cited by the Trump administration doubled its death-toll projection to reflect a relaxation of social-distancing guidelines.

More than 30 states have reopened or eased restrictions, and more are expected to do so soon. In Arizona, which was visited on Tuesday by President Donald Trump, stores may reopen by the end of the week, said Governor Doug Ducey, a Republican.

Pence, who is in charge of the task force, confirmed a New York Times report earlier on Tuesday about the team's closing, telling reporters that his goal was to start handing responsibility back to government agencies by May 25, Memorial Day.

"I think we're starting to look at the Memorial Day window, early June window as a time when we could begin to transition back to having our agencies begin to manage … our national response in a more traditional manner," he said.

Pence said the winding down of the task force was "a reflection of the tremendous progress we've made as a country".

Pence's briefing with reporters came minutes before Trump touched down in Arizona, where he toured a Honeywell International aerospace facility in Phoenix that makes protective masks.

In Arizona, Trump said: "We can't keep our country closed. We have to open our country. ... Will some people be badly affected? Yes."

The president said he would continue to hear from experts such as Anthony Fauci, director of the National Institute of Allergy and Infectious Diseases, and Deborah Birx, the White House coronavirus response coordinator, as well as "other doctors".

The Times report said White House officials informed the task-force members of the plan to finish their operations in the coming weeks.

But Fauci told CBS News on Tuesday morning that he hadn't been told the task force would be shutting down. "That's not true. I've been in every task force meeting, and that's not what they are doing," he said.

As he was departing the White House for Arizona, Trump said he would allow Fauci to testify before the Republican-led Senate, but not the Democrat-led House of Representatives, calling the lower chamber a "setup".

"The House is a bunch of Trump-haters," Trump said.