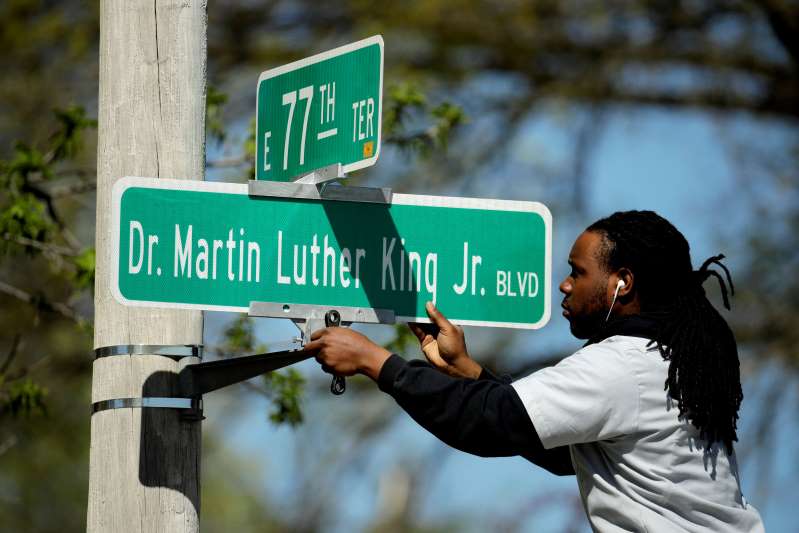 More than 50 years after the Rev. Martin Luther King Jr. was assassinated, the question of how to honor him continues to divide Kansas City residents.

When the City Council voted in January to name a 10-mile boulevard that runs north and south through mostly minority neighborhoods after the civil rights icon, Kansas City seemed to finally shed its distinction as one of the largest cities in the US without a street named for King. That vote capped a contentious effort led by black pastors and officials of the local chapter of the Southern Christian Leadership Conference.

But within weeks of the vote, a grassroots group began collecting signatures asking that the question of renaming of the boulevard known as The Paseo be placed on the ballot this year. They want to change the boulevard's name back to The Paseo. The Save the Paseo group on Friday turned in petitions with 2,857 signatures — far more than the 1,700 needed.

Save the Paseo volunteers say they admire King and want to name a major street for him, but contend The Paseo is the wrong choice because of its historic importance to the city. They also stress that the City Council waived a related city ordinance before its vote and that most Paseo residents weren't notified about the potential name change.

"No one I'm working with is against Martin Luther King," said Diane Euston, a member of the "Save the Paseo" effort. "We honor him and respect him as a great leader. We don't want this to become a racial issue. It's a democratic process and history issue."

Vernon Howard Jr., president of the Kansas City chapter of the SCLC, scoffs at the idea that race isn't a factor, noting that many Save the Paseo members are white and don't live on or near the street. He doesn't understand why the opponents are adamant now, after a contingent of black leaders worked for two years to overcome reluctant city officials following decades of inattention to honoring King.

For whites "to try to determine and challenge the decisions of African American people and others about a street that runs through a community of persons of color is the epitome of white privilege," Howard said. "It might be covert and not intentional sometimes but it speaks of white privilege, arrogance that we can't determine things, not even in our own community."

The uproar over the name change doesn't surprise Derek Alderman, a geography professor at the University of Tennessee who has studied the naming of streets for Martin Luther King for decades. As of 2017, 955 US cities had streets named for King and many of those changes were contentious, he said.

Renaming a major road for King is difficult because it represents a battle over race, power and symbols of what a community values, he said.

"The debate goes beyond names, beyond King's memory, to determining which groups within cities have the power to claim certain places and express themselves," Alderman said. "It is often the case where African Americans have not had a large voice in identifying communities and they now want and deserve an opportunity to have a voice in how cities look."

The issue has percolated for decades but gained momentum last year, after the city's parks board rejected a request from black ministers and others to name The Paseo for King. Mayor Sly James appointed an advisory board, which recommended three potential sites to honor King — a terminal at the new Kansas City airport; 63rd Street, a busy street that runs east and west through poor minority neighborhoods and upper middle class, mostly white neighborhoods; and The Paseo.

The black advocates pushed for renaming The Paseo and the City Council approved the change after a combative meeting on Jan. 24.

Councilman Quinton Lucas, a black candidate for Kansas City mayor who lives on The Paseo, pushed his fellow council members to approve the renaming, saying it was time to find reasons to welcome the change after generations of excuses.

The Paseo, the city's first boulevard, was completed in 1899 and includes inviting sections with grassy medians, fountains and impressive mansions from Kansas City's early years. There are signs of economic revival in some sections, while other neighborhoods languish with ruined houses and empty lots.

Cheryl Barnes, board president of the Blue Hills Neighborhood Association on the city's east side, said residents worry changing the street's name would hurt efforts to revive the area.

"It's not the specific name change we're concerned about," said Barnes. "It's taking something that's iconic and valuable to the neighborhood and wrenching it from the east side."

But Gladys Hibbs, a housewife who lives near The Paseo, said naming it after King would be a lasting reminder of his legacy for the city's future generations.

"It will give them something to look at, to remind them, to think about his time and what we've been through," she said.

The boulevard was planned by influential German landscape architect George Kessler, who named it after Paseo De La Reforma, an iconic road in Mexico City. Historians say it and several other Kansas City boulevards, designed with wide expanses and green areas, became the backbone of the city and shaped its transportation routes and growth. They say that connection to the city's history would disappear if the Paseo name is removed.

Lucas said those who oppose the name switch have a right to put the issue on the ballot, but he hopes Kansas City residents keep King's name.

"I don't know if it is necessarily a preferred look to take 50 plus years to recognize Dr. King and go from being one of the only cities in the country without a King street to being a city that takes (the name) off the street as well," he said.