WORLD Growing global support for US protests over killing by police

Growing global support for US protests over killing by police 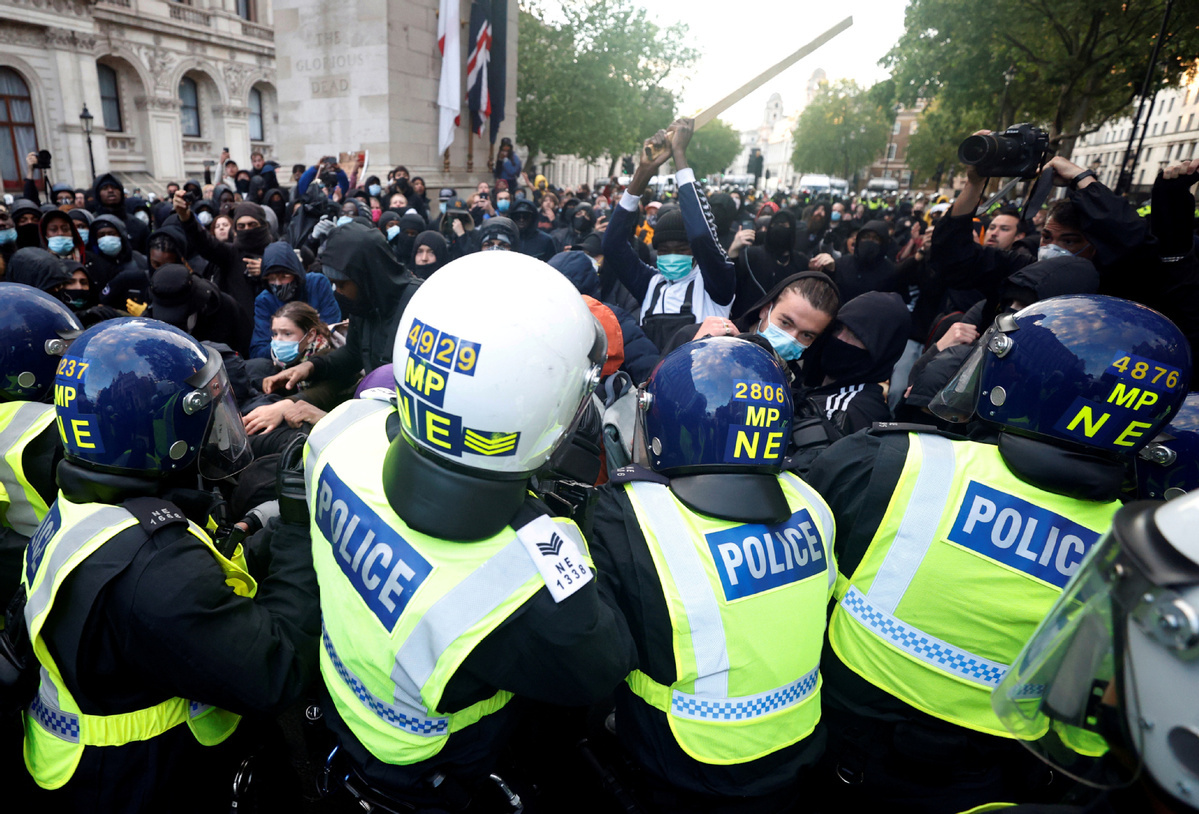 Protesters and police clash during a Black Lives Matter rally in London on Saturday. JOHN SIBLEY/REUTERS

Chinese in San Francisco give strong backing to demonstrators

San Francisco's Chinese community has expressed solidarity with African Americans following the police killing of George Floyd, despite the losses they sustained during the looting.

Businesses in San Francisco sustained widespread damage on May 30 after what started as peaceful protests turned into a storm of looting. The looting reached Chinatown around 11:30 pm, said Leanna Louie, a member of a neighborhood watch group United Peace Corps.

Louie said about 50 looters ransacked stores on Grant Avenue, mostly jewelry stores, in Chinatown, when she and two other members were patrolling the neighborhood in their car.

Afraid of more looting and vandalism, many stores have closed or reduced hours, and some have put up "for rent" signs. Since Monday night there have been more police in Chinatown, said Louie.

Demonstrations continued across the US on the weekend, following the death of Floyd.

The mass protests also led to curfews in at least 140 cities in the country.

"Words cannot express adequately the sense of dismay, regret, and grief caused by the death of George Floyd and others as we all cope with the long legacy of failures by government and the US criminal justice system to address the scourge of racial inequity, bigotry, and violence in this society," said Doug Chan, the president of the Chinese Historical Society of America.

"The killing of Floyd informs us that we all must do more as a community to address, through a process of political, economic, and social reform, the racial and ethnic prejudices that can destroy our society literally within a heartbeat."

Asians 4 Black Lives, a group in the Bay Area, denounced the "gross displays of state-sanctioned police violence", saying in a statement that police violence is not the result of some officers being "a few bad apples" but that "the trees producing these apples are rotten to the roots".

The Chinese community also showed up for the African American protests, as members of the Chinese Progressive Association joined thousands of others at a kneeling demonstration on June 1 in front of the San Francisco City Hall to demand justice for all black families brutalized by police.

The protests also spread to several European countries, with thousands gathered in central London and Berlin on Saturday.

According to reports, around 15,000 participants demonstrated on Saturday against racism and police brutality at Alexanderplatz Square in Berlin. Police said only 1,500 participants had registered for the event.

Police officers said on Twitter that the square was full and asked people to stop going there.

Many of the demonstrators in black clothes carried banners supporting the Black Lives Matter movement. Organizers called for a silent demonstration lasting exactly 8 minutes and 46 seconds, the time it took for Floyd to lose consciousness as a police officer knelt on his neck.

Berlin police said they arrested 93 people after a group of demonstrators threw bottles and stones at officers. The police said 28 officers suffered minor injuries in the scuffles.

In a separate incident, a press photographer was hit in the head by a bottle, police added.

In the United Kingdom, thousands of protesters gathered outside the US Embassy in London on Sunday to condemn police brutality after the killing of Floyd.

Cressida Dick, the Metropolitan Police Commissioner, said 27 officers had been injured in "shocking and completely unacceptable" assaults during anti-racism protests in central London, including 14 on Saturday.