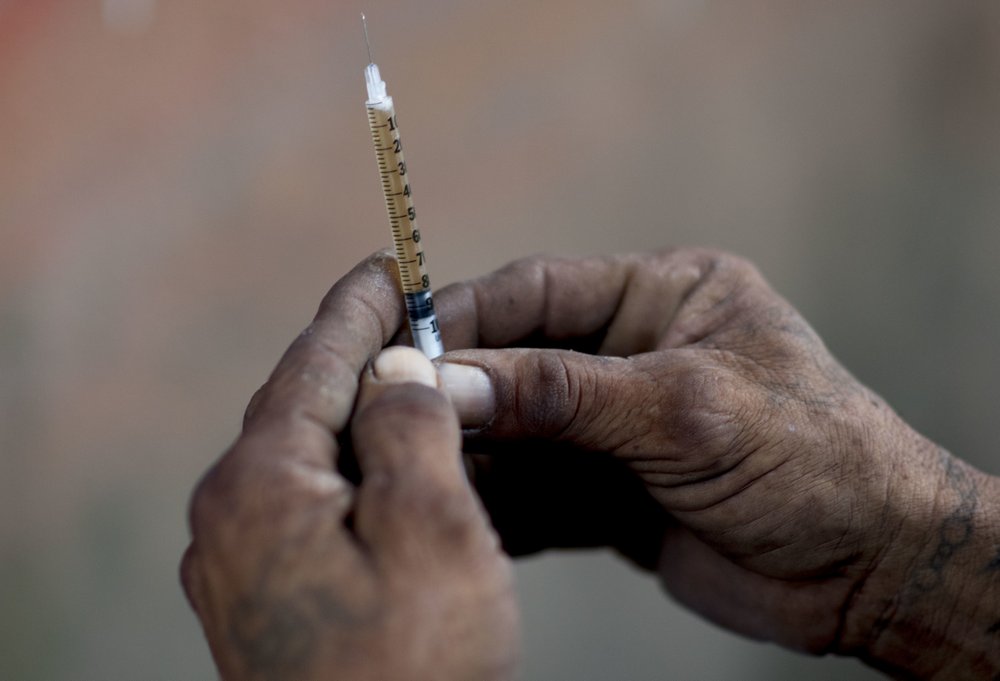 In this Dec. 14, 2018 photo, a heroin addict prepares a dose for himself, in an area where heroine uses shoot up behind an abandoned home in Humacao, Puerto Rico. (Photo: AP)

Jose Carlos Laviena emptied his pockets, took off his shoes and waited to die.

He had just injected himself with a new type of heroin that his dealer was promoting, but the high was so strong that Laviena thought he had overdosed. The 35-year-old was preparing his body for how he wanted to be found.

"It's truly something super strong," he said, referring to what he believes was heroin mixed with fentanyl. "I felt death at that moment."

Laviena's near-fatal experience in an abandoned trailer in southeast Puerto Rico is one of many signs that the island hasn't been spared from the opioid crisis that has plagued the US mainland— a problem that seems to have grown as a result of a devastating hurricane.

The government is struggling to keep up, and failed to apply for a multimillion dollar US grant that advocates say could have helped save lives.

More than 600 fentanyl-related overdoses and 60 deaths were reported in Puerto Rico in 2017, largely before Hurricane Maria, up from 200 and eight the previous year. While that’s much less dire than the crisis in some US states, activists and experts say the problem appears to be expanding rapidly as use of fentanyl, the opioid blamed for much of the problem in the US, spreads more widely here.

The US Drug Enforcement Administration and local nonprofit groups also say they believe that actual deaths and overdoses are far higher than those official numbers indicate because the island's government is not keeping proper count — and recently stopped even trying to count fatal overdoses due to financial constraints.

Despite that, the US territory never applied for a $7.8 million award from Congress to help get people into treatment. That money was instead divided up among US states.

"It's ridiculous. There's a lot of need for that money," said Carmen Davila, a nurse who helps drug addicts in rural Puerto Rico. She worries the number of overdoses will increase, and she questioned the 612 overdoses reported in 2017 by the government. "I'd say it's three times that amount based on the testimonies of people we’ve helped, and that’s a conservative estimate."

Julissa Perez, spokeswoman for Puerto Rico’s Administration of Services for Mental Health and Addiction, said it was too difficult for the thinly staffed agency struggling with staffing cuts to apply for the new grant while also coordinating work under earlier grants and programs.

"I am extremely worried, because this represents an epidemic that has not been acknowledged," said Puerto Rico territorial Sen. Jose Vargas Vidot, a doctor known for his volunteer work with drug addicts on the island. "In the 30 years that I've been on the streets, I have never seen three to four deaths a week in just one neighborhood, in just one street ... Everything changed immensely after Hurricane Maria."

Vargas said the heavy presence of law enforcement on the island after the Category 4 storm hit on Sept. 20, 2017, coupled with a lengthy paralysis of all modes of transportation used by smugglers, led drug dealers to substitute imported heroin with fentanyl, which was available at hospitals since it is legally produced in Puerto Rico. He said he and other doctors received anonymous tips that criminals were threatening hospital staff with violence or even death if they did not hand over fentanyl supplies.

Meanwhile, many patients lacked access to basic health care for weeks after the hurricane hit, and pharmacies began refilling prescriptions without a doctor’s authorization as a humanitarian move, he said. In addition, mental disorders were exacerbated after Maria, with some people waiting up to a year for water and power to be reconnected.

"There was a boom in anxiety disorders and suicides," Vargas said. "All these things led to fentanyl and other drugs becoming much more fashionable."

In addition to locally produced fentanyl, authorities say a less-controlled version of the drug is now being smuggled in from China and India, then mixed with heroin, and to a lesser degree cocaine and marijuana. Officials reported a cluster of fatal overdoses in the western coastal town of Mayaguez, followed by more overdoses at a nearby prison in the northwest town of Aguadilla. From there, activists say, the use of illegal fentanyl and other opioids has spread to all major cities, including the capital.

In the southeast coastal town of Humacao, a group of heroin and cocaine addicts recently gathered around a plastic table near an abandoned house and injected each other and themselves. One of them stuck a thumb in his mouth and blew out, making the vein pop on his neck as he prepared for the injection. On the table were dozens of dirty needles, small water bottles and cookers.

Workers with a needle exchange program called Intercambios Puerto Rico approached the group, collected the dirty needles and placed a strip of paper in a couple of the cookers. Minutes later, a red line appeared — a positive test for the presence of fentanyl.

Program director Rafael Torruella said he noticed an increase in overdoses after Maria hit and his organization began testing heroin cookers for fentanyl. Now nearly all of them test positive.

Laviena was among the addicts who approached the social workers that day. He dropped off 140 used needles, picked up clean cookers and paused to recount his near-death experience before disappearing behind an abandoned building.

"Hardly anyone talks about this problem in Puerto Rico. It’s like it doesn't exist," said Torruella, who also trains emergency officials on how to save people from an overdose. "Fentanyl is here, and we have to do something about it."

But that is proving hard for an island mired in a 12-year recession and sharp budget cuts forced by a sort of public bankruptcy.

Puerto Rico's Administration of Services for Mental Health and Addiction confirmed 40 fentanyl deaths through March, but 75 suspected ones since then have gone untested because of budget cuts.

"Right now we have some serious limitations," said Suzanne Roig, who oversees the agency.

Officials also are worried about legally prescribed painkillers. Gov. Ricardo Rossello declared an alert about overdoses in 2017 and announced the government would track the use of legal opioids such as fentanyl and hydrocodone. In the seven months since that began, officials recorded about 60 prescriptions per 100 people. That’s roughly equal to the full-year rate for the US mainland in 2017.

The crisis in Puerto Rico has not reached the epidemic levels of the US mainland, but officials worry it will catch up soon. The opioid crisis killed some 48,000 Americans in 2017, with 5,400 fatal drug overdoses alone reported in Pennsylvania, the highest of any state. The US Centers for Disease Control says fentanyl was responsible for the highest percentage of fatal overdoses in 2016, followed by heroin and cocaine.

But activists complain Puerto Rico has been slow to take the problem seriously, and it’s not just the failure to request federal money.

Several legislators in Puerto Rico have been trying for more than two years to pass a measure that would in part allow non-medical and non-emergency personnel to administer naloxone, which can reverse respiratory failures from opioid overdoses. The island's Senate sent a new bill to committee last year, but it has languished for several months.