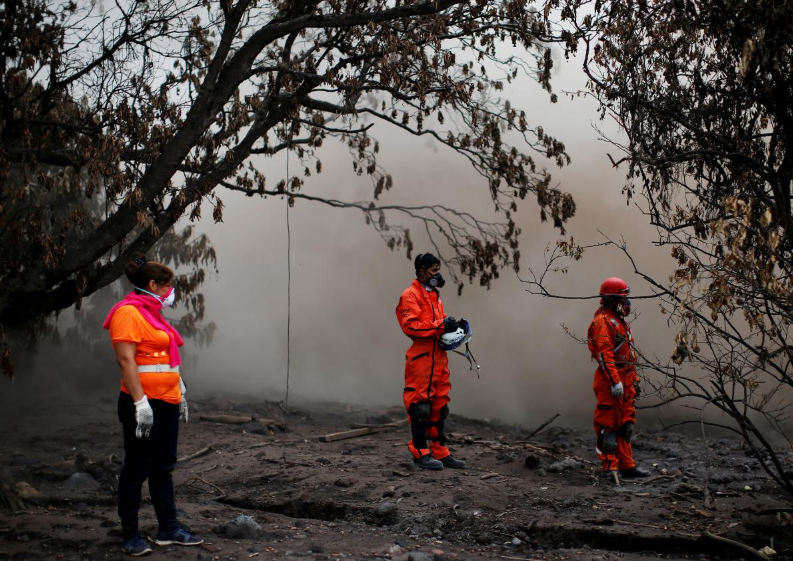 Eva Ascon, looks on next to rescue workers as they search for her rest of her family at the affected by the Fuego volcano at San Miguel Los Lotes in Escuintla Guatemala June 15, 2018 (Photo: Reuters)

Guatemala on Sunday ended its victim search efforts in the zone that suffered most deaths and injuries from the Fuego volcano eruption, its disaster agency said.

At least 110 people died and 197 are still missing after violent eruptions that began two weeks ago, according to disaster agency CONRED.

San Miguel Los Lotes and El Rodeo in the Escuintla municipality... the zone is uninhabitable and high risk,” CONRED said in a statement on Sunday.

The Fuego volcano, whose name means “Fire” in Spanish, is emitting four or five minor explosions daily and shooting columns of ash up to 15,420 feet (4,700 meters) above sea level, CONRED said.

Escuintla is operating 12 shelters for nearly 2,800 people displaced from homes that were swallowed by ash and dirt, while more than 770 people are staying in shelters in nearby areas.

Some survivors lost nearly all members of extended families after the volcano sent fast-moving currents of dust, lava and gas down its slopes in its greatest eruption in four decades.