EL RODEO, Guatemala - The number of fatalities from a massive volcano eruption in Guatemala rose to 62 on Monday, an official in the Central American country said.

Only 13 of the dead have been identified so far, said Mirna Zeledon, a spokeswoman for Guatemala's National Institute of Forensic Sciences.

The eruption of Fuego - Spanish for "fire"- on Sunday was the biggest in more than four decades, forcing the closure of Guatemala's main international airport and dumping ash on thousands of acres of coffee farms on the volcano's slopes.

Rescue workers struggled in perilous conditions to find bodies under rivers of ash and mud. Structures and trees at the base of the Fuego volcano were coated in brown and gray. A policeman wearing a blue surgical mask stumbled in the muck as he ran from a cloud of ash pouring down the slope behind him, Reuters photos showed.

Guatemala's national disaster agency, CONRED, said the death toll rose as more bodies were pulled from the ash around the village of El Rodeo, which was hard hit by the eruption.

It was unclear whether more people died in a second eruption on Monday morning.

The task of pulling out bodies was halting, after the new eruption and an apparent landslide on the southern slopes of Fuego triggered fresh evacuations.

"They gave the emergency order to evacuate, and we all went running," one rescue volunteer said on television. "We were pulling out bodies. We're going to wait a half hour before entering again."

A witness near the volcano said more people had been evacuated beyond a five-mile perimeter from the site after the latest explosion.

Fuego is one of several active volcanoes out of 34 in the Central American country.

Around 300 people have been injured since the eruption on Sunday that sent columns ash and smoke 6.2 miles into the sky, dusting several regions with ash.

CONRED shared a photo showing the flows of gas and mud sweeping down a mountainside and across a broad valley, engulfing a small village.

"The landscape on the volcano is totally changed; everything is totally destroyed," government volcanologist Gustavo Chigna said on local radio.

The agency also launched an online registry of missing people.

The eruption showered sand and ash on coffee plants across as much as 6,890 acres, including close to the volcano's cone, causing an estimated loss of 0.91 percent of Guatemala's coffee production, the country's national coffee association said.

In some areas, rain rinsed ash off the leaves, and the full extent of the damage was not yet clear, the association said. 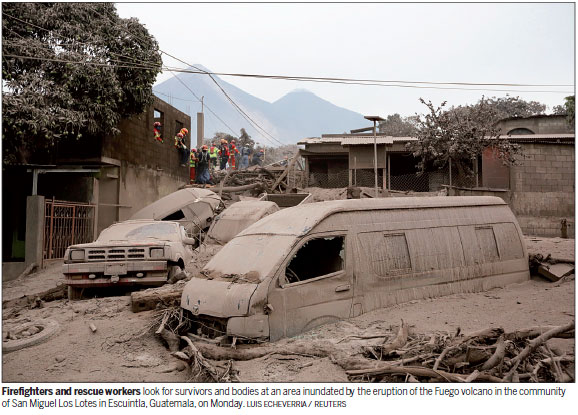