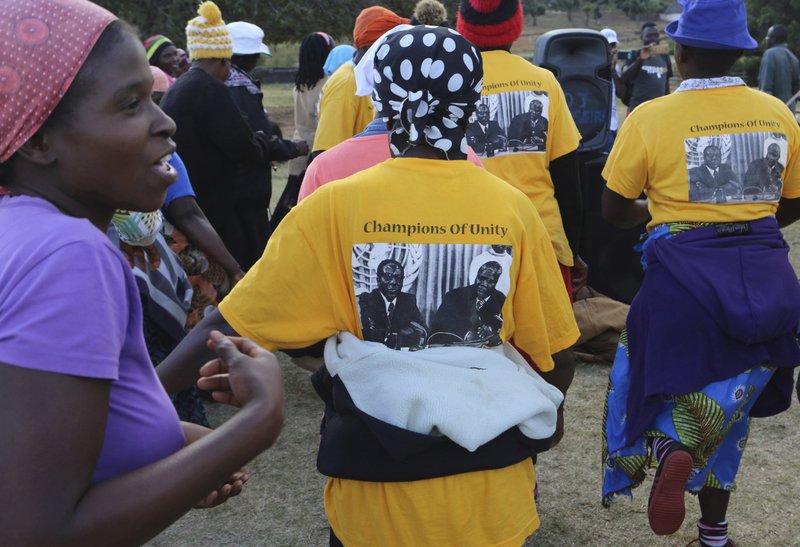 Zimbabwe’s former leader Robert Mugabe has been forced out but he’s hardly faded away. Ahead of this month’s historic election, dozens of people in T-shirts with his image danced to anti-government songs while vowing revenge.

The 94-year-old Mugabe, who led this southern African nation through 37 turbulent years before his dramatic, military-backed resignation in November, has emerged as a player ahead of the July 30 vote — on the side of the opposition.

A visit by The Associated Press to the largely rural province of Masvingo found that anger over Mugabe’s removal has been channeled into supporting candidates who challenge the ruling ZANU-PF party that he long controlled.

“They removed Comrade Mugabe using military force. We should show them that the ballot box is supreme to the gun,” thundered Phionah Riekert, a 31-year-old loyalist of Mugabe and his wife, Grace. Youths and elderly women punctuated her campaign speech with song, dance and the beating of drums.

Riekert seeks a parliamentary seat as a candidate with the National Patriotic Front, which was formed with Mugabe’s backing in March by members of a youthful faction loyal to him called the G-40. They had been purged from the government and ruling party by new President Emmerson Mnangagwa’s military-backed administration.

The G-40 has been suspected in the grenade attack last month at a campaign rally that killed two aides while the 75-year-old Mnangagwa, a former Mugabe deputy, was just “inches” away.

The National Patriotic Front has joined an opposition coalition backing the top challenger to Mnangagwa, 40-year-old Nelson Chamisa of the main opposition MDC party, while fielding close to 100 candidates in 210 constituencies countrywide.

The margin between Mnangagwa and Chamisa has narrowed to just 3 percentage points, the Afrobarometer research group said Friday after sampling 2,400 voters across the country between June 25 and July 6.

While Mugabe has not addressed any political rallies he remains a weighty presence in places like Masvingo, where support has swung between the ruling party and the opposition in past elections.

“G-40 was influential in this province during Mugabe’s time. They have been regrouping, they have the capacity to cause quite an impact,” said Godfrey Mtimba, a journalist who has covered Masvingo for a decade.

Some residents, however, said they remain fond of Mugabe but will vote for Mnangagwa.

Kudzai Mugarati said he still wears Mugabe T-shirts but hides them underneath his clothes. Part of that loyalty is tied to his land, part of a farm seized from white owners and divided among black supporters years ago during Mugabe’s often violent campaign of evictions.

“We cannot abandon Mugabe. He is our hero, he gave us this land. But we cannot leave ZANU-PF, so the best thing we can do is not to talk about him,” the 58-year-old Mugarati said.

At a shopping center near Masvingo’s main army barracks, people openly discussed politics in a sharp contrast to previous elections, when the opposition alleged harassment and attacks by security forces.

“You have come to intimidate us with your uniform,” one opposition supporter shouted, pointing at an approaching soldier. Both laughed and embraced, with the soldier going on his way.

Nearby, a group danced to pro-Chamisa songs blaring from the speakers of lawyer Derrick Charamba’s car.

“I am just dancing because the beat is good. The lyrics are rubbish,” said Edmund Wasosa, a ruling party supporter. “Chamisa is still too young. We need experienced hands.”

Despite the apparent peace, the election’s credibility has been threatened by disputes over the transparency of the voters’ roll and the printing of ballots. Charamba, an opposition official, has taken the Zimbabwe Electoral Commission to court in one of many cases brought in recent weeks by NGOs and others.

Mnangagwa has pledged that the election will be free and fair. While Mugabe scorned Western election observers, the new president has invited them for the first time in nearly two decades. A credible vote could lead to the lifting of international sanctions and a boost for Zimbabwe’s collapsed economy.

While some miss Mugabe, no one is eager to remain trapped in the high unemployment and severe cash shortage he left behind in the once-prosperous country.

Curious voters have packed rallies and waited for hours to see both Mnangagwa and Chamisa as a new Zimbabwe tries to leave Mugabe’s shadow.

“We welcome every vote. Mugabe, we welcome your vote,” Chamisa told one Masvingo crowd in a cold rain this month. He has denied allegations of financial support from Mugabe in exchange for making the former first lady a vice president if he wins.

“We want a new dispensation, a fresh start,” Chamisa said, to cheers.