Five people have died of Ebola virus in Guinea, the health agency said on Monday, as the government and aid groups began to roll out their response to the outbreak. 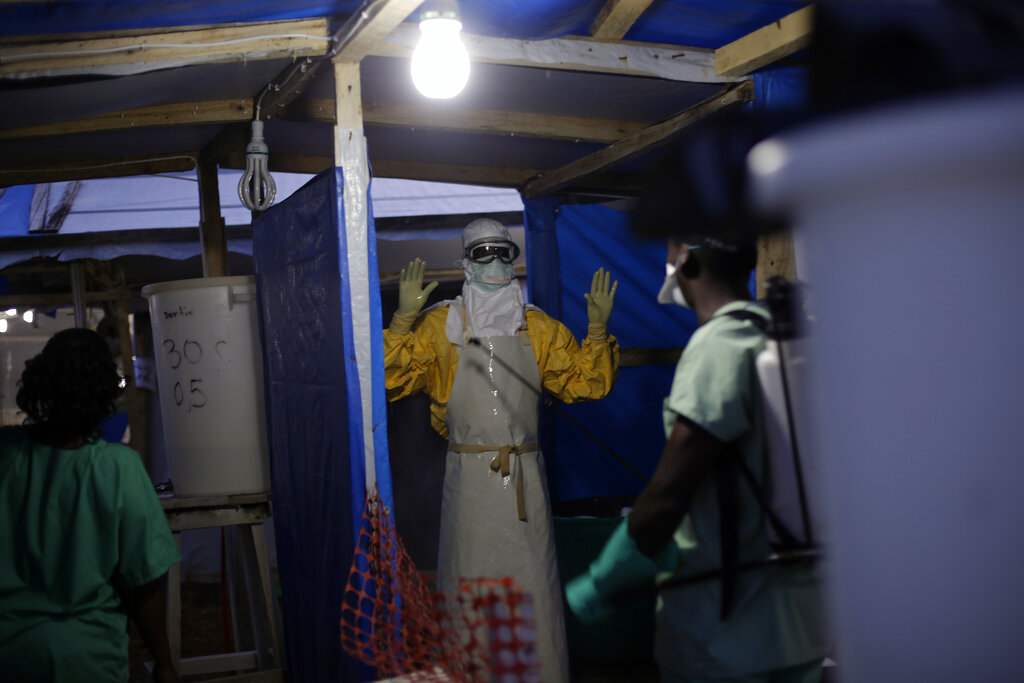 In this Nov. 20, 2014 file photo, an MSF Ebola heath worker is sprayed as he leaves the contaminated zone at the Ebola treatment centre in Gueckedou, Guinea. (File photo: AP)

Guinea announced the outbreak on Saturday -- the first in West Africa since a 2013-2016 epidemic that left more than 11,300 dead in Guinea, Liberia and Sierra Leone.

According to an epidemiological report by the country's health agency dated February 15, five people have now succumbed to the virus, rising from a death toll of four reported earlier on Monday.

Only one of the victims was confirmed positive for Ebola, with the remaining four listed as "probable cases".

Two other people have tested positive, the health agency said, while another 10 are showing symptoms.

The first confirmed victim was a 51-year-old nurse, who died in late January.

She was from Nzerekore near the town of Gouecke in the forested south of the country.

Two of the nurse's brothers who attended her funeral on February 1 have also died, a health official who requested anonymity said.

It remains unclear who the other victims are, or whether they attended the nurse's funeral.

The UN's Guinea office tweeted that the first flight carrying experts and sanitary equipment arrived in Nzerekore on Monday.

Prime Minister Ibrahima Kassory Fofana said Guinea had "set up structures to deal with this type of epidemic".

"No panic, let's respect the sanitary instructions. Ebola will be defeated again," he tweeted.

Ebola causes severe fever and, in the worst cases, unstoppable bleeding. It is transmitted through close contact with bodily fluids, and people who live with or care for patients are most at risk.

An NGO official who spoke to AFP on condition of anonymity said he was concerned because health workers had not yet identified who infected the nurse.

But Alfred George Ki-Zerbo, the World Health Organization's representative in Guinea, said on Monday that Ebola vaccines could arrive in the poor nation of 13 million "within 72 hours".

"Our priority is to complete the risk assessment on the ground and to analyse the cross-border dimension," he said, referring to the area near the Liberian border where the virus re-emerged.

Guinea's health agency is also increasing its capacity in the area.

Anja Wolz, the Ebola coordinator for Doctors Without Borders, said the NGO was sending an experienced medical team to meet local people and explain the need to follow health rules.

"We know that when such a frightening disease is misunderstood in the community, and individuals suddenly arrive giving instructions, in costumes resembling spacesuits, it can easily generate a hostile reaction," she said.