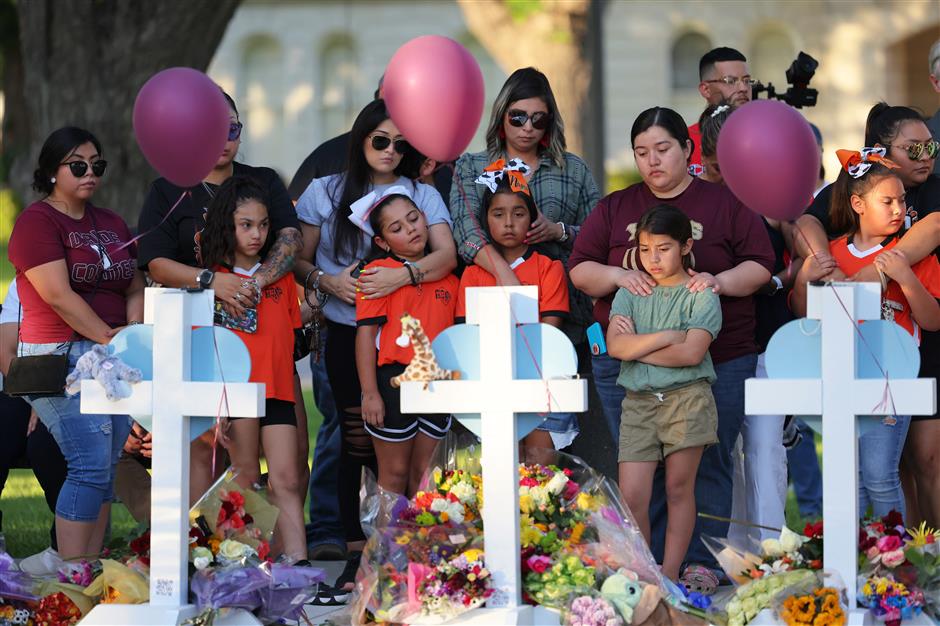 People visit memorials for victims of Tuesday's mass shooting at a Texas elementary school in City of Uvalde Town Square on May 26 in Texas.

Gun safety advocates are pushing US President Joe Biden to take stronger measures on his own to curb gun violence after the Texas elementary school shooting, but the White House is putting responsibility on Congress to pass laws that would have more impact.

The White House has spoken with gun safety groups since Tuesday's rampage in Uvalde, Texas, in which 19 elementary school students and two teachers were killed – the deadliest school shooting in nearly a decade – activists said.

The groups are urging Biden to make an emergency declaration on gun violence, name a gun violence czar, advocate lifting the Senate filibuster if necessary and issue an executive order on background checks for firearms purchases if lawmakers do not pass legislation tightening loopholes in current law.

For the moment, the Biden administration is pressing Congress to pass tighter gun laws that can have more lasting impact than executive action. The White House has been in touch with top Democrats in Congress regarding the next steps on firearms laws.

Bills backed by Democrats requiring background checks, banning semi-automatic rifles and strengthening gun safety measures have failed for a decade in Congress in the face of stalwart Republican opposition and objections from some moderate Democrats and independents. Gun-rights advocates believe in a broad interpretation of US constitutional protections for keeping and bearing arms.

Democrats in Congress said on Wednesday they would try again on legislation.

"The plan is to work hard at a compromise for the next 10 days," said Senator Chris Murphy. "Hopefully, we succeed and the Senate can vote on a bipartisan bill that saves lives."

After the Texas gunman, identified as Salvador Ramos, 18, used an AR-15 semi-automatic rifle to kill students and teachers before being killed, many gun safety activists demanded more urgency from the White House.

"President Biden is not doing enough," David Hogg, a survivor of the Parkland, Florida, high school massacre, said on Wednesday.

The White House has said it was looking at every tool at its disposal to stop gun violence, including executive action, but stressed that Biden needed help from the legislature.

"It is time for Congress to act," said White House press secretary Karine Jean-Pierre, who was grilled by reporters about what the administration was doing on the issue. "The president cannot do this alone."

Since taking office in January 2021, the Biden administration has taken several steps without Congress. They include requiring that "ghost guns," which are often assembled from kits, be regulated the same way as traditional firearms, and launching a strike force aimed at cracking down on illegal firearms trafficking in major cities, including New York and Los Angeles.

Gun safety advocates say there is more the president can do alone.

A national emergency declaration gives the president additional statutory powers to address a crisis. The White House says Biden has already called it an emergency and a legal invocation would not lead to the authorities needed to address gun violence.

Brown said if the Senate did not pass gun safety measures under consideration, Democrats should lift the filibuster rule requiring 60 votes in the 100-member body to approve legislation. Biden, a former US senator, has been largely reluctant to advocate such a change to pass his policy agenda.

Po Murray, who chairs the grassroots group Newtown Action Alliance, said the White House needs an office of gun violence prevention. "We appreciate that (domestic policy council director) Susan Rice is tasked with addressing this issue, but we believe we need somebody that could spend 100 percent of his or her time doing this work," Murray said.

"Since we elected a gun safety president, he could certainly do more," she said.