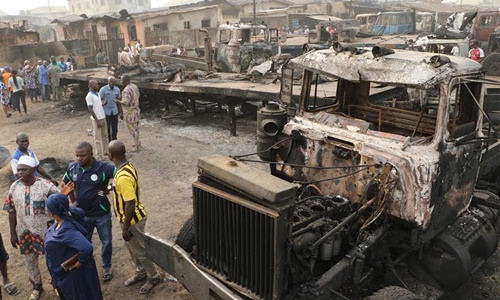 Photo taken on Jan. 20, 2020 shows the explosion site of a pipeline in Lagos, Nigeria. At least two bodies had been recovered from the explosion site of a Nigerian National Petroleum Corporation pipeline in Lagos, Nigeria's economic hub, an official with the National Emergency Management Agency (NEMA) said Monday. (Photo:Xinhua)

Gunmen from a suspected criminal gang stormed a school in central Nigeria on Wednesday, killing one student and kidnapping dozens of other pupils, teachers and relatives, the local government said, in the country's latest mass abduction.

President Muhammadu Buhari ordered security forces to coordinate a rescue operation, his office said, after gunmen in military uniforms raided the Government Science College in the town of Kagara in Niger state.

Details about the kidnapping were still emerging and a new tally came after initial reports from a government official and a security source that hundreds of students were snatched from the school, where they were staying in dormitories.

"They kidnapped 42 people from the school. They took away 27 students, along with three teachers. One student was killed. They also kidnapped 12 family members of the teachers," Muhammad Sani Idris, spokesman for Niger state's government, told AFP by phone.

Heavily armed gangs known locally as "bandits" in northwest and central Nigeria have stepped up attacks in recent years, kidnapping for ransom, raping and pillaging.

Buhari condemned the abduction and ordered security forces to coordinate an operation to rescue the students.

The latest mass abduction comes only two months after 300 students were kidnapped from a school in Kankara in nearby Katsina, Buhari's home state, while the president was visiting the region. The boys were later released after negotiations with government officials.