Guns and trucks at Oregon protest to defend Trump's America

Hundreds of Donald Trump's supporters gathered for a large motorcade in support of the US president and police near Portland, where anti-racism activists have clashed continuously with law enforcement for more than 100 days. 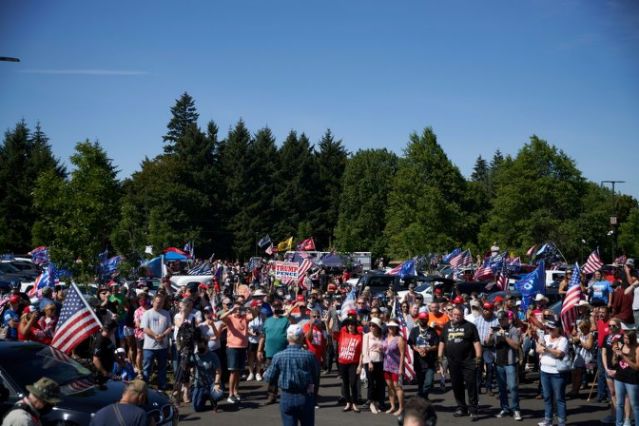 Small groups of men loaded with paramilitary equipment, many of them armed militants from right-wing extremist groups, milled among the crowd that consisted mostly of families and older people.

About 300 cars, including many massive pickup trucks, then took to the roads surrounding Oregon City, some 30 miles (50 kilometers) from Portland, before dispersing.

But 150 to 200 people, led by members of the far-right Proud Boys militia, which advocates white supremacy, decided to follow the road to Oregon's capital, Salem, for a show of force on the steps of the state capitol building.

Tensions in the Portland area heightened on August 29 when Aaron Danielson, 39, a supporter of the far-right group Patriot Prayer, was shot dead in the city.

He had had just participated in a pro-Trump motorcade like the one on Monday and left the parade to go into Portland with other attendees.

A 48-year-old man named Michael Reinoehl, who claimed to be an "anti-fascist" on social media, was suspected of the shooting. He was shot dead five days later by police looking for him. Reinoehl allegedly tried to escape and grabbed a gun when he was killed.

On Monday, the Labor Day holiday in the US, rally organizers stressed their motorcade route would not go near Portland for safety reasons.

Hundreds of American flags waved above the motorcade, often with banners calling for Trump's reelection on November 3.

Pictures of Trump, depicting him as Rambo with a machine gun in hand, occasionally appeared on the banners as well.

"Trump has the brains to get America back on track," said Cassy Larson, an accountant in a small Oregon town.

"He knows what it takes for the capitalism to generate the money to fix the buildings down in downtown Portland that are being destroyed by the other people," she told AFP.

She was referring to the protests against racism and police brutality that have rocked the city -- and the entire country -- since the death in May of George Floyd, a black man, at the hands of white police officers.

Demonstrations have been particularly stormy in Portland, a city of 650,000, where anti-fascist activists frequently clashed with police.

Trump has cast the city as being under siege by "thugs" engaged in "domestic terrorism," though the demonstrations have been peaceful for the most part.

While protests have continued in Portland, and many downtown businesses have boarded up their storefronts, the damage has been minimal and daily life continues to be calm, an AFP reporter confirmed.

But Carol Williams, a retiree and longtime Republican activist, disagrees: she said downtown Portland "looks like a third-world country with all of the graffiti and the burning and the looting.

"We don't stand for violence, even though that's what we're accused of," said Williams, who lives in the small town of Silverton, 37 miles south of Portland.

"We are peaceful. We don't go looking for retribution," she added, referring to Danielson's death.

Art White, a veteran who spent three and a half years in Vietnam during the war, says he made the trip to show he supports "my president Donald J Trump 1,000 percent.

"We have finally come up with a president that will stand up for our rights" and American values, said the short, mustachioed 70-year-old, proudly sporting a cowboy hat.

"I've seen what a socialistic, Communistic community state does to their people, and it is not nice," White said, adding he worries about "the socialist outsiders, the Communist outsiders, that has invaded our country in the last 20 years."

"I will support my constitutional rights... with my own life if I have to," White said.

"It makes me sad that I have to fight in my own country."