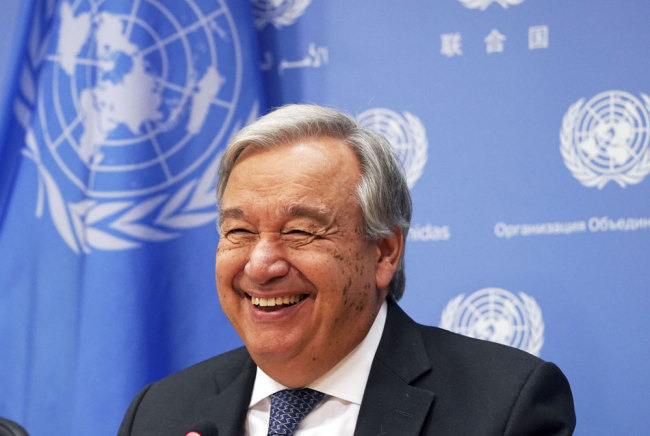 UN Secretary-General António Guterres arrives for a press briefing to mark the opening of the 74th session of the United Nations General Assembly at the UN in New York on September 18, 2019. (Photo: AFP)

United Nations (UN) Secretary-General Antonio Guterres on Friday hailed China's cooperation with and contributions to the world organization, on the eve of the 70th anniversary of the founding of the People's Republic of China, which falls on Oct. 1.

"China has been a key participant in the work of our organization and has played a central role as a pillar of international cooperation and multilateralism. China and the United Nations are continuing to work together to address pressing global issues," said Guterres in a message, which was read by his deputy Amina Mohammed, at a National Day reception held by China's permanent mission to the UN.

"It's a pleasure to be with you to celebrate the 70th anniversary of the founding of the People's Republic of China. This year also marks 40 years of the United Nations presence in China," he said.

Guterres expressed the hope to work with China on climate change. "Next week, I will convene a Climate Action Summit, bringing together world leaders to tackle this urgent challenge. Chinese leadership will be critical. I commend China for its work on climate solutions based on nature, and for pledging to update its climate target by 2020."

China has also been a pioneer in implementing the Sustainable Development Goals, said Guterres. "Your country has shown a strong commitment to sustainable development, most notably the goal of ending poverty, and to South-South cooperation."

"China was also at the origins of our most comprehensive global action plan for gender parity -- the Beijing Declaration," he added.

China has been a steady partner in ensuring that the UN can carry out its activities, as the second-largest contributor to the regular and peacekeeping budgets of the organization. China also provides a significant number of Blue Helmets serving under the UN flag, he noted.

"I am particularly grateful for the political and financial support China has provided to help us create a stronger coordination function for sustainable development, and for the Peace and Development Trust Fund you created in 2016," he said.

"I thank you for your commitment to the collective efforts of the United Nations to address peace and security, human rights, and development challenges across the globe, and wish you continued success in the years to come," said Guterres