A new variant of China's H-6K bomber, which experts said on Wednesday is more powerful than the original version, was spotted in the second joint aerial strategic patrol by the air forces of China and Russia on Tuesday. 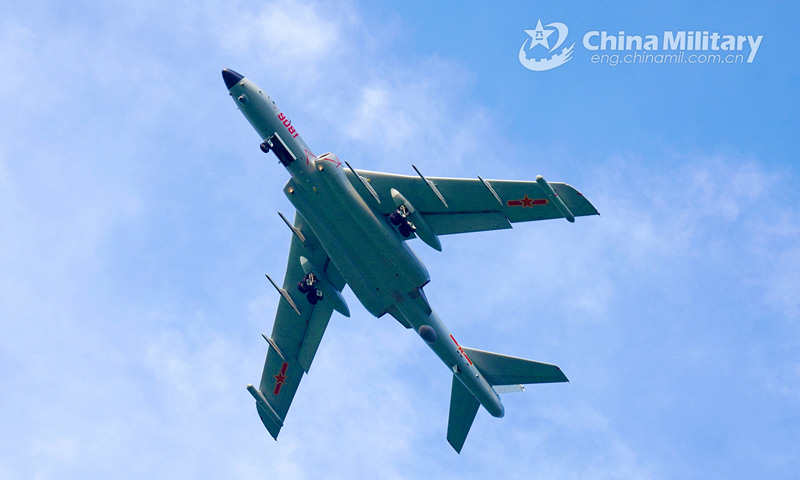 A H-6 strategic bomber attached to a bomber regiment of the naval aviation force under the PLA Southern Theater Command soars into the air during a recent realistic flight training exercise. (eng.chinamil.com.cn/Photo by Gao Hongwei)

Japan's Air Self-Defense Force identified four Chinese H-6 bombers and two Russian Tu-95 bombers when they flew across the South China Sea and the Sea of Japan on Tuesday, according to a statement seen on the website of Japan's Defense Ministry the same day.

The Japan Air Self-Defense Force was able to take photos of the Chinese and Russian bombers, and in one photo attached to the statement, an H-6 bomber could be seen having four pylons under its right wing. This means it likely has a total of eight wing pylons.

No weapon or pod was seen carried by the pylons in the photo.

The event reported by Japan is the second joint aerial strategic patrol in the Asia-Pacific region conducted by China and Russia, as the defense ministries of China and Russia simultaneously released statements on Tuesday, announcing that they had sent the same number and types of aircraft through the same region the same day.

The statement released by the Chinese Defense Ministry gave more details on the H-6 bombers, namely their exact designation, the H-6K of the People's Liberation Army (PLA) Air Force.

Chinese military observers noticed that the previously known H-6K bomber only has six wing pylons, three on each wing, but the H-6K photographed by the Japan Air Self-Defense Force has more pylons.

Wang Ya'nan, chief editor of Beijing-based Aerospace Knowledge magazine, told the Global Times on Wednesday that the H-6K with eight pylons could be an improved variant of the original version.

The two pylons near the tips of the wings could be used to carry pods for electronic countermeasures, which will make significant contributions to the bomber's survivability in modern warfare, Wang noted.

Another possibility is that the new H-6K could carry eight long-range air-to-ground weapons, meaning stronger firepower than the previous six, Wang said.

The latest H-6K variant is not the first H-6 bomber to have eight wing pylons, as the H-6J, operated by the PLA Navy, and made its first public debut in July in drills in the South China Sea, also has eight.