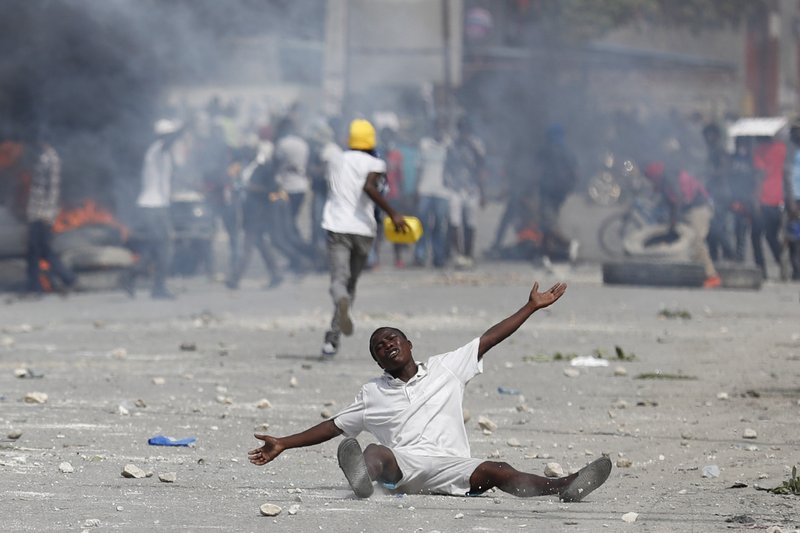 A protestor drops to the ground as he pleads with police after they fired tear gas to prevent protestors from marching toward the United Nations headquarters, in Port-au-Prince, Haiti, Friday, Oct. 4, 2019.(Photo: AP)

Haitians braced for more upheaval on Saturday as opposition leaders, emboldened by a massive protest demanding the resignation of President Jovenel Moïse, pledged to remain on the streets.

Friday marked one of the largest demonstrations since the protests began weeks ago as opposition supporters say they are tired of corruption, ballooning inflation and a shortage of basic goods. They also called on other countries to withdraw support for Moïse, blaming him for Haiti’s economic and social problems.

“If they love Jovenel that much, then send him somewhere else,” said Assad Volcy, who launched a political party two years ago but is joining forces with opposition leaders from other parties trying to oust Moïse. “We’re going to keep protesting until he resigns or goes to jail.”

The unrest on Friday came after several weeks of protests in which 17 people have been reported killed, the economy has been largely paralyzed, 2 million children have been unable to go to school and badly needed aid has been suspended, especially to rural areas. The US, United Nations and other important international players have yet to drop their support for Moïse, making it appear unlikely that he will step down, despite protests that have made gasoline, food and water scarce in some areas.

At least two people were shot on Friday as police in riot gear blocked the main entrance to the airport and fired tear gas at the crowd, which threw rocks, bottles and Molotov cocktails.

Early Saturday, police said that eight people, including two police officers, were injured by gunfire in protests held Friday in Haiti’s southern and western regions. In addition, two homes were set on fire in Grand Anse and five people arrested in the south on charges including possession of knives.

Carlos Dorestant, a 22-year-old motorcycle driver, said he saw the man next to him shot, apparently by police, as protesters crossed a barrier near the UN office.

“We are asking everyone in charge to tell Jovenel to resign,” he said, his shirt stained with blood. “The people are suffering.”

Several protesters held up signs asking the US for help. “Trump give Haiti one chance” read one, while another quoted a tweet by presidential candidate Bernie Sanders. A third referred to US House Speaker Nancy Pelosi, who discussed the crisis with Haitians in Miami on Thursday. Some protesters also held out red cards for Moïse like those used to penalize and eject soccer players from a game.

The opposition has rejected Moïse’s call for dialogue and created a nine-person commission it says would oversee an orderly transition of power, with many demanding a more in-depth investigation into corruption allegations which involve the use of funds from a Venezuela-subsidized oil program.

Critics say Moïse has not looked into the former top government officials suspected in the alleged corruption. They include ally and former President Michel Martelly.

Moïse, who owned a company named in the investigation, has denied all corruption allegations. He says he will not resign.

“Jovenel Moïse must step down as quickly as possible,” he said. “The battle will go on.”

Moïse’s ally, former Prime Minister Evans Paul, also met earlier this week with the Core Group, which includes officials from the United Nations, US, Canada and France to talk about the political situation. He has said that he believes Moïse has two options: nominate an opposition-backed prime minister or shorten the length of his mandate.

Laurent Dubois, a Haiti expert and Duke University professor, said there is no clear answer on what might happen next as the turmoil continues.

“The thing that haunts all of this is ... is this going to lead to the emergence of more authoritarian rule?” he said.

Some protesters questioned why international leaders had not spoken publicly against Moïse even as he and his administration face corruption allegations.

“How can they support this government if it represents everything that is wrong?” said Israel Voltaire, a 35-year-old attorney. “With us being a democratic country, it’s like we’re losing the war.”