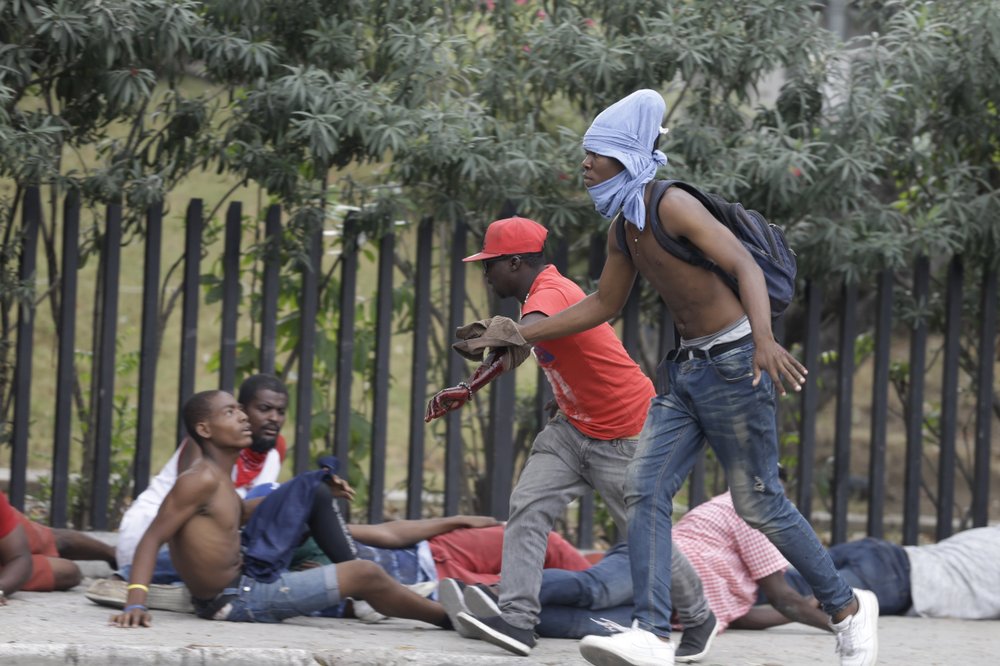 An off-duty police officer who was shot in the arm runs during a protest over police pay and working conditions for the national police, in Port-au-Prince, Haiti, Sunday, Feb. 23, 2020. (Photo: AP)

Haitian police officers exchanged gunfire for hours Sunday with soldiers of the newly reconstituted army outside the national palace, in a dangerous escalation of protests over police pay and working conditions.

At least three police officers were wounded, fellow officers told The Associated Press. The army’s high command said in an online statement that a soldier had been wounded by a bullet in the back.

Haiti’s raucous three-day Carnival celebration was to have started Sunday afternoon in Port-au-Prince and other major cities but the government announced Sunday night that Carnival was canceled in the capital “to avoid a bloodbath.” Police protesters and their backers had burned dozens of Carnival floats and stand at recent protests, saying they did not believe the country should be celebrating during a crisis.

Shortly after noon Sunday, AP journalists saw dozens of men who said they were off-duty officers march with hundreds of supporters toward the palace in the latest in days of demonstrations demanding better pay for Haitian law-enforcement officers.

The protest stopped outside the army headquarters, which faces the palace.

AP journalists then saw soldiers at the headquarters building fire into the air. Shortly afterward, an exchange of fire erupted between the soldiers and police. It was not clear which side began firing at the other first.

As the afternoon wore on, uniformed officers joined their colleagues in the street outside the palace, firing at the military base with semi-automatic pistols and rifles. Many wore masks along with their uniforms to hide their identities.

Other armed men spotted a drone that appeared to be taking images of the violence and followed it to the offices of Radio Caraibes, then began shooting at the broadcaster’s building. There were no immediate reports of casualties in the attack.

Police protests began this month after a half-dozen officers were fired over their attempt to unionize. The demonstrations are not directly linked to anti-corruption protests that roiled Haiti for most of last year, but they draw on the same widespread dissatisfaction with Haiti’s shrinking economy and President Jovenel Moise’s inability to improve the quality of life.

A uniformed police officer in a black-and-white clown mask told reporters outside the palace that officers were demanding the reinstatement of their fired colleagues as well as a pay raise for all officers.

“Until this is done we will not sit and talk,” said the officer, who declined to provide his name. “The president has proven that he does not care about our demands.”

Moise said at a news conference Saturday that he recognized the legitimacy of many police complaints and would increase some collateral benefits for officers, but police said Sunday that the concessions were not enough.

The Haitian army had been disbanded in 1995 after the fall of a dictatorship that used soldiers to repress domestic opponents. Moise reformed the army in 2017, promising that the military would patrol Haiti’s borders, assist in natural disasters and avoid domestic affairs.

At least three men were taken to a hospital near the shooting with wounds to the legs and feet that did not appear to be life-threatening. Uniformed police officers told an AP journalist that the wounded men were fellow officers. The uniformed officers spoke on condition of anonymity because they were not authorized to speak to the press.

Intense shooting continued until after 6 p.m. when it devolved into sporadic exchanges of fire.