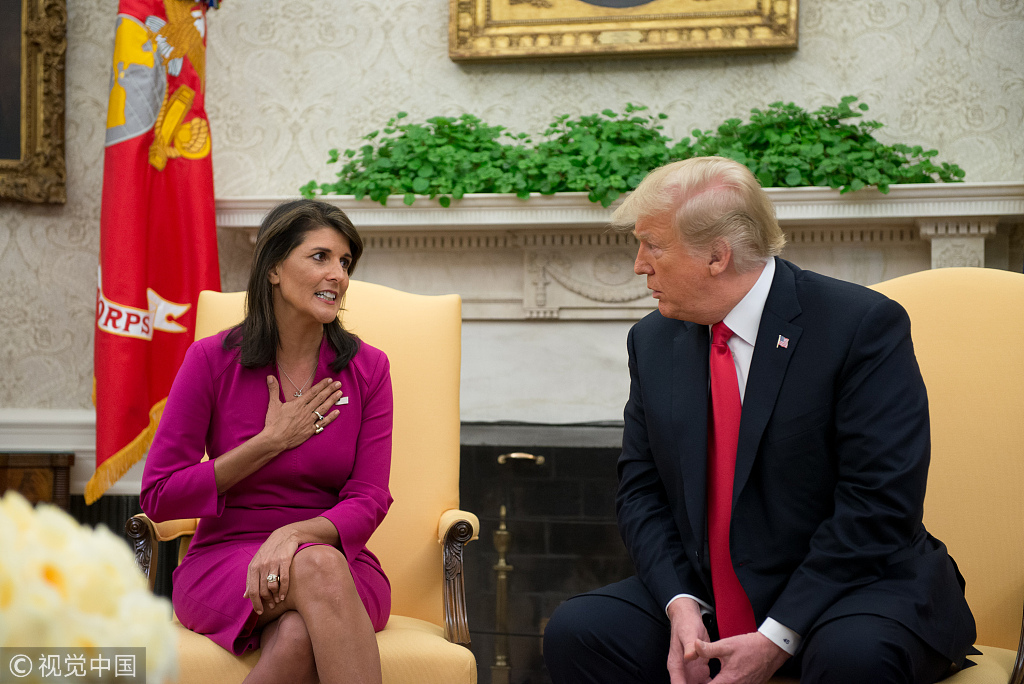 US President Donald Trump and US Ambassador to the United Nations Nikki Haley meet in the Oval Office of the White House to announce Haley's resignation, in Washington, DC, United States, October 9, 2018. (Photo: VCG)

WASHINGTON, Oct. 10 (Xinhua) -- As US President Donald Trump was still weighing on possible candidates to replace Nikki Haley, the outgoing US ambassador to the United Nations, experts say that the successor will likely be Trump's mouthpiece at the international arena while bearing less importance in America's foreign policy making process.

On Tuesday, Trump accepted Haley's resignation, which came as a surprise as many high-level administration officials have been blindsided about the news. Haley said she will remain in the post till the end of the year.

Many believed that Haley fulfilled her job as US envoy to the United Nations. As US online media BuzzFeed put it, Haley "managed to represent the United States at a multilateral institution for an administration that is highly critical of multilateralism."

"She was a forceful, articulate, and passionate advocate for the foreign policy of the Trump administration," Brett Schaefer, a fellow at the Heritage Foundation, told Xinhua.

While much still remained unknown about why the 46-year-old former South Carolina governor chose to announce her decision now, less than one month away from the Congressional mid-term elections, people have already shifted attention to the candidates who will succeed her post.

Trump told reporters on Wednesday that his administration is contacting Dina Powell, his former deputy national security advisor, on a possible replacement of Haley while not ruling out other people for the post, including some who are currently working in the administration.

The president, who was expected to make a pick in two or three weeks' time, revealed on Tuesday that he had already had a five-person short list for the post.

"Trump likely will choose a tough-minded individual to replace Haley because that is his general stance on foreign policy," said Brookings Institution Senior Fellow Darrell West.

"He will want someone who defends his policies regardless of what the individual may think," the scholar told Xinhua.

So far Powell has been widely regarded as a top candidate for the post. She returned to work in Goldman Sachs as a senior executive after leaving her White House job earlier this year. She once served in the George W. Bush administration.

But some hard-line conservatives have already expressed concern about Powell's "globalist" views, which they think may not align with Trump's "America first" approach to foreign policy.

Haley's replacement is going to be someone willing to "make the president's case" and "be his mouthpiece," Ford O'Connell, a Republican and news commentator who frequently shows up on TV, told Xinhua.

Experts also noticed that Haley's successor will work under a circumstance largely different from Haley's days, when there were then the "nearly invisible" Secretary of State Rex Tillerson and "a practically dysfunctional National Security Council."

"That vacuum must have been energizing and exciting for Haley as she grabbed the center of attention," Aaron David Miller and Richard Sokolsky , experts on international affairs, wrote to US media.

But Haley's star has gradually dimmed with the appointment of Mike Pompeo as Trump's new Secretary of State and John Bolton as the national security advisor.

"She (Haley) has been eclipsed in recent months by Secretary Pompeo. He has taken the lead on a number of issues and clearly is the go-to person on foreign policy in the Trump Administration," noted West.

"Haley's successor will have a seat at the table, but it might as well be empty because whoever is chosen ... the new ambassador to the UN is more than likely to speak softly and carry a small stick," wrote Miller and Sokolsky.