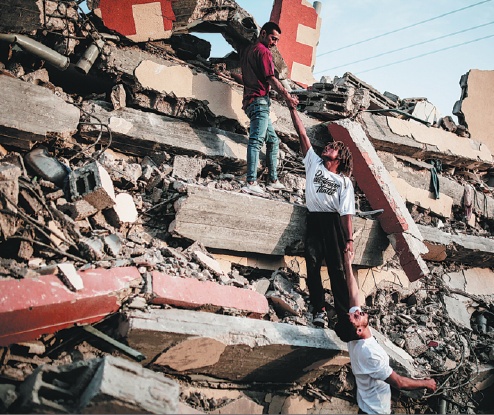 The Hamas movement's leader in the Gaza Strip on Monday expressed optimism about reaching a prisoner exchange with Israel, while Egyptian mediators seek to hammer out a long-term cease-fire following an 11-day war in the Gaza Strip last month.

Yehiyeh Sinwar spoke after meeting with Egyptian intelligence chief Abbas Kamel, who visited Gaza a day after talks with Israeli Prime Minister Benjamin Netanyahu on a trip aimed at shoring up an informal cease-fire brokered by Cairo.

Sinwar said "there is a real chance to make progress" in indirect negotiations that could involve the release of Palestinian prisoners held by Israel, and the return of two Israeli citizens and the remains of two Israeli soldiers held by Hamas since the previous war in 2014.

However, Hamas rejected linking the process of reconstruction in the Gaza Strip with reaching a prisoner-swap deal with Israel.

Khalil al-Hayya, a senior Hamas leader, told reporters at the end of a meeting with Kamel that Hamas leaders discussed with the Egyptian security delegation the cease-fire with Israel and the process of reconstruction in the Gaza Strip.

Palestinian sources close to Hamas, who spoke on condition of anonymity, said that Kamel, carried an Israeli message that links reconstruction and the missing Israelis in Gaza.

"In regards to the issue of prisoner exchange with the occupation (Israel), it is an independent subject and we will never accept linking it to the issue of reconstruction in the Gaza Strip," Hayya said.

Meanwhile, Moussa Abu Marzouk, deputy chief of Hamas abroad, said on social media that Hamas completely rejects linking the issue of reconstruction in the Gaza Strip with the issue of the release of the Israelis held in the enclave.

Egypt often serves as a mediator between Israel and Hamas and was a key player in negotiating the cease-fire that ended the fighting. Kamel, who has not given public statements, is the highest-ranking Arab official to visit Gaza since 2018.

The war, which was halted by a cease-fire on May 21, was triggered by weeks of protests and clashes in Jerusalem over Israel's policing of a flashpoint holy site and efforts by settler groups to evict Palestinian families in the nearby Sheikh Jarrah neighborhood.

The fighting erupted on May 10 when Hamas launched a barrage of rockets at Jerusalem.

Palestinians fired more than 4,000 rockets toward Israeli cities during the fighting, while Israeli warplanes struck about 1,000 targets in Gaza. More than 250 people were killed, the vast majority of them Palestinians living in Hamas-ruled Gaza, and parts of the territory suffered heavy damage.

Egypt and Qatar each pledged $500 million for reconstruction in Gaza.

"Today, by the grace of Allah, after this victory of May 2021, our Palestinian cause is making tangible and clear progress," Sinwar said.