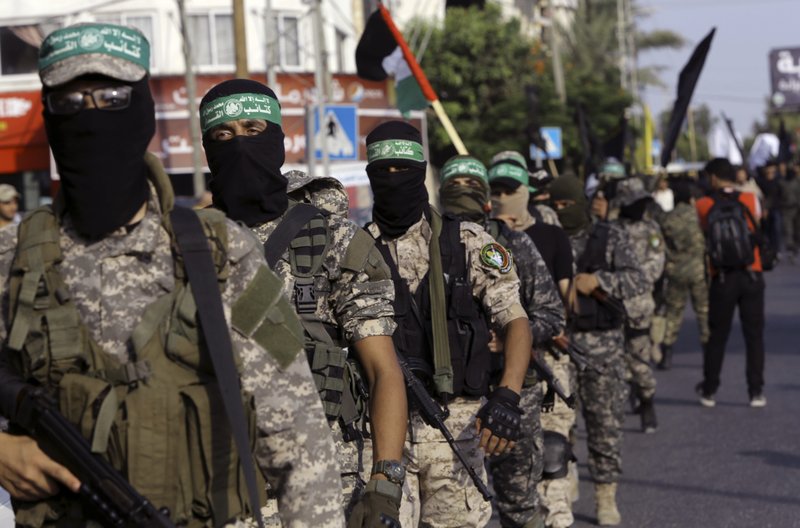 Masked militants from the Izzedine al-Qassam Brigades, a military wing of Hamas, march with their rifles during a parade in Gaza City on July 25, 2017. (Photo: AP)

GAZA, April 7 (Xinhua) -- Islamic Hamas movement on Tuesday said it is ready to engage in negotiations over a prisoner swap deal if Israel takes practical steps on the issue.

"The ball is now in Israel's field" with regards to the issue of negotiating a prisoner swap deal and releasing Israeli soldiers who have been in captivity in the Gaza Strip since 2014, spokesperson for Hamas movement Hazem Qassem told reporters in Gaza.

Qassem said the movement made its position clear when Hamas Chief in Gaza Yahya Sinwar called for the release of Palestinian elderly, women, ill and children from Israeli jails in exchange for taking a "positive step" towards this file.

Qassem's comments came shortly after Israeli Prime Minister Benjamin Netanyahu announced that Israel was ready to start immediate dialogue with Hamas through a third mediator to get back the Israeli "dead and missing" held in Gaza.

Hamas declared two years ago that it held four Israeli soldiers in captivity, without revealing any information about their fate, while Israel said they were dead.

The last prisoner swap deal between Hamas and Israel, which was held in 2011 brokered by Egypt, set free 1,000 Palestinian prisoners from Israeli jails.