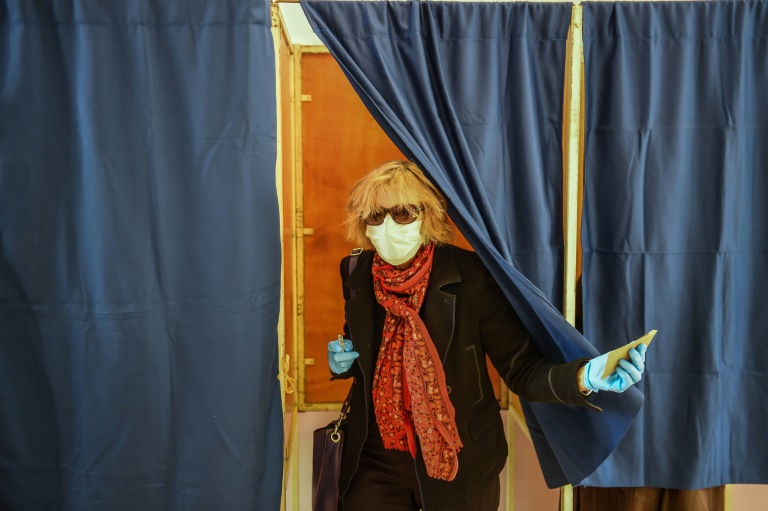 French voters cast their ballots Sunday in municipal elections that appear headed for the lowest turnout in decades, after the mounting coronavirus toll saw the government close bars, restaurants and schools and limit long-distance travel.

Anti-infection precautions were in place at the country's 35,000-odd voting stations, with bottles of hand sanitiser at entrances and floors marked with tape to ensure people stay one metre (3.3 feet) from one another.

Several voters turned out sporting surgical masks or disposable gloves and clutching their own pens or bottles of gel.

France is one of the European countries hit hardest by the virus, with some 4,500 out of 150,000 confirmed global infections and 91 of more than 5,700 deaths worldwide.

The capital had a notably low tally at just 12.6 percent.

But some voters were unfazed.

"One must vote," Bernard Gallis, 66, told AFP upon leaving an otherwise empty polling station in Aulnay-Sous-Bois outside Paris in the morning.

"There is no one here, and the risk is low," he said, gesturing towards the balloting station where his wife and six officials seated at tables laden with political party pamphlets were the only other people.

But Gallis said his children, aged 40, 36, and 32, were not planning to vote because of the virus risk.

After casting his ballot in northern France, Macron insisted that "it is important to vote in these times," provided people respect the personal protection measures recommended by scientists.

But many people questioned the wisdom of maintaining the vote for mayors and some half-a-million local councillors, especially if the crisis worsens ahead of the second round of voting next Sunday.

The country has indefinitely closed creches, nursery schools, schools and universities, banned gatherings of more than 100 people, and urged residents to limit their movements in a bid to curtail the spread of the virus.

On Sunday, the government said long-distance trains and international flights will be limited and public transport reduced.

Museums, theatres and tourists sites such as the Eiffel Tower have already closed.

In a televised address to an anxious nation Thursday, Macron said he decided not to delay the vote after scientists assured him "there is nothing to prevent the French, even the most vulnerable, from going to the ballot box".

Municipalities have said they would regularly disinfect door handles and voting booths, while advising voters to bring their own writing implements.

"It went well. There were not too many people and everyone respected the one-metre distance," he told AFP.

A recent opinion poll found 28 percent of potential voters in France were "concerned" about the risk posed by mingling at polling stations, which are often hosted at schools.

"It is certain that many people will be dissuaded from voting," political historian Jean Garrigues of the University of Orleans told AFP.

Critics say this could impact on the outcome, especially if certain demographic groups -- such as older people who tend to vote more on the right -- stay away in larger numbers than others.

The election will be a key test for Macron, whose party swept Paris in the 2017 presidential election, but has since lost popularity in part due to the president's perceived autocratic leadership style.

In a further complication, Macron's chosen candidate Benjamin Griveaux withdrew from the Paris race over a sex video scandal, and then-health minister Agnes Buzyn was parachuted in as a last-minute replacement.

Results will be announced after the last polling stations close at 1900 GMT.