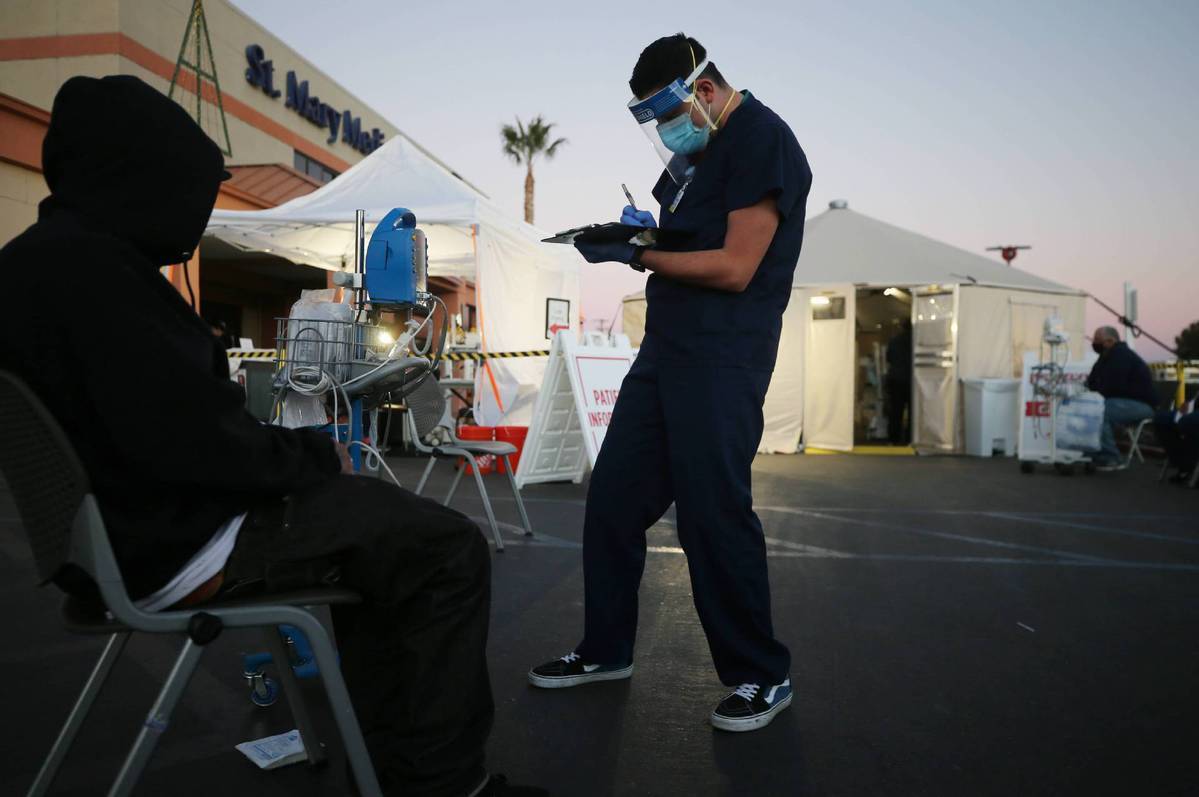 A California National Guard medic checks the vital signs of an incoming patient in front of triage tents set up outside Providence St Mary Medical Center amid a surge in COVID-19 patients in Southern California in Apple Valley, California, on Dec 18, 2020. (Photo: Agencies)

As the overall COVID-19 death toll in the US neared 400,000, health officials in California reported that a second variant of the virus has appeared across the state and also have halted one lot of vaccine doses due to allergic reactions.

The variant, known as L452R, was first detected in Denmark in March and appeared in California in May.

In December, researchers at the University of California, San Francisco, sequenced genomes of coronavirus gathered around the state and found that the variant was present in 3.8 percent of their samples. By January, it had jumped to 25.2 percent.

The new variant is different from the highly contagious one first identified in the UK, which while more contagious, doesn't appear to cause more severe illness.

California's public health department said it's not yet clear whether the variant is highly contagious or is just being identified frequently as lab work becomes more sophisticated.

On Sunday, California's top epidemiologist told healthcare providers to stop using a batch of Moderna's COVID-19 vaccine after a "higher than usual" number of people had apparent allergic reactions at a San Diego vaccination clinic.

Dr Erica Pan said that "out of an extreme abundance of caution", providers should stop administering the doses until federal, state and company officials finish an investigation.

California has received about 330,000 doses from the Moderna lot in question — No. 041L20A — about 10 percent of all the state's supply, from both Moderna and Pfizer, that has been distributed.

The death rate from COVID-19 in Los Angeles County — the most populous in the country and the epicenter of the pandemic in the US — is about one person every six minutes, officials said.

The total number of US coronavirus cases surpassed 24 million on Monday, and the country has had the most COVID-19 deaths in the world since April. The death toll stood at 398,588 on Monday evening, according to the John Hopkins University Coronavirus Resource Center.

Daily deaths in California from the virus are averaging 528, an increase of more than 15 percent from a week ago. Much of the state, including the southern region, remains under a stay-at-home order.

In Los Angeles County, an air-quality regulator has suspended for 10 days the limit on the number of cremations than can be authorized to deal with the backlog of bodies at hospitals and funeral homes.

In New York, Governor Andrew Cuomo on Monday pleaded with federal authorities to curtail travel from countries where new variants are spreading.

"Stop those people from coming here. Why are you allowing people to fly into this country and then it's too late?" Cuomo said, referring to new variants detected in the UK, South Africa and Brazil.

Cuomo also asked Pfizer's CEO on Monday for the ability to buy COVID-19 vaccine doses directly from the company. But the company said in a statement that the US Department of Health and Human Services would need to approve such a plan first.

Cuomo, a Democrat, blamed the Trump administration for failing to send enough vaccine to his state. He said New York would receive 250,000 doses this week— 50,000 fewer than the previous week.

From supply shortages to registration issues, a string of mishaps has impaired rollout efforts across New York City.

Requests are high for a vaccine in the city, but there is no guarantee a dose will be available for someone who is eligible, which now includes people age 65 and over.

The state's COVID-19 website says vaccines are "very limited", and New York City Mayor Bill de Blasio said Friday that the city is expected to run out of vaccines by this week.

Cuomo suggested Pfizer should be able to sell directly to his state, bypassing federal agencies, because Pfizer is "not bound by commitments that Moderna made as part of Operation Warp Speed".

"The company's decision to opt out of Operation Warp Speed, which the Biden administration plans to overhaul, puts it in a unique situation that could help us save lives right here in New York," Cuomo wrote.

His request comes as his state and many areas report they are short of vaccine doses.

More than 31 million doses have been distributed to states, but less than half of them have been used thus far.

A California man who told police that COVID-19 left him afraid to fly has been arrested after hiding at Chicago's O'Hare International Airport for three months.

The man told authorities he was too "scared to go home due to COVID", so he found a badge that gave him access to a restricted area and sustained his months-long stay by relying on other passengers to give him food.