WORLD Hard-hit countries limp back to normal, wary of outbreaks

Hard-hit countries limp back to normal, wary of outbreaks 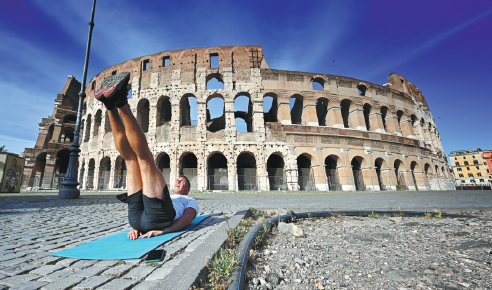 A man exercises on a mat by the Colosseum in Rome on Friday. (Photo: AFP)

Spain and France, two of the countries hardest hit by the coronavirus pandemic, were preparing on Sunday for an easing of lockdown rules.

In Spain, the daily death toll from the coronavirus fell to its second lowest since mid-March on Saturday, as half the country prepared to move to the next phase of an exit from one of Europe's strictest lockdowns.

The country was scheduled to loosen its lockdown on Monday, but Phase 1 will include a considerable easing of measures that will allow people to move around their province as well as attend concerts and go to the theater. Gatherings of up to 10 people will be allowed, and restaurants will be able to offer some outdoor service.

"We've managed to retake 99 percent of the ground lost to the virus," said Prime Minister Pedro Sanchez in a televised address on Saturday. But he warned people moving to Phase 1 to be "prudent" and "cautious".

French officials on Saturday said the day's death toll of 80 in the country was the lowest since early last month. Nursing home fatalities also fell sharply as France prepared to relax curbs on public movement imposed eight weeks ago.

But health officials warned that "the epidemic remains active and is evolving", and that social distancing must be kept up even as restrictions are eased.

Elsewhere in Europe, British Prime Minister Boris Johnson was to set out a five-tier warning system for the virus in England on Sunday when he was to outline the government's plans to begin slowly easing lockdown measures.

The media reported that the system would range from "green" at level one to "red" at level five to flag the risk in different areas and allow the government to increase restrictions where necessary.

The British government told airlines it would introduce a 14-day quarantine period for most people arriving from abroad to avoid a second peak of the coronavirus outbreak, an association representing the airlines said on Saturday.

The quarantine plan was first reported by The Times newspaper, which said Johnson would announce on Sunday that passengers arriving at airports and sea ports, including Britons returning from abroad, would have to self-isolate for a fortnight.

Under measures that are likely to come into force early next month, travelers will have to provide the address at which they will self-isolate on arrival, The Times said.

In Italy, the number of recoveries from COVID-19 exceeded 100,000 on Saturday, while the number of total infections stood at 218,268. People have returned to the streets and reveled in fine weather since restrictions there were eased last week.

In Latin America, the Brazilian Congress declared on Saturday a three-day period of mourning for the victims of the novel coronavirus, as the county's death toll surpassed 10,000.

While Brazil's numbers are high－10,627 deaths and 155,939 confirmed cases－scientists think the real figures could be 15 or even 20 times worse, given the country's inability to carry out widespread testing.

Congress and the Supreme Court decreed an official mourning period of three days and lawmakers asked Brazilians to follow health authorities' recommendations to reduce infection rates while the country prepares for "a safe and definitive return back to normal".

Resisting pressure from President Jair Bolsonaro, who opposes isolation measures due to their impact on the economy, the governors of Sao Paulo and Rio de Janeiro states will extend the partial quarantine measures in force since March until the end of this month.

In Mexico, the health ministry confirmed 1,938 new cases on Saturday, along with 193 additional deaths.