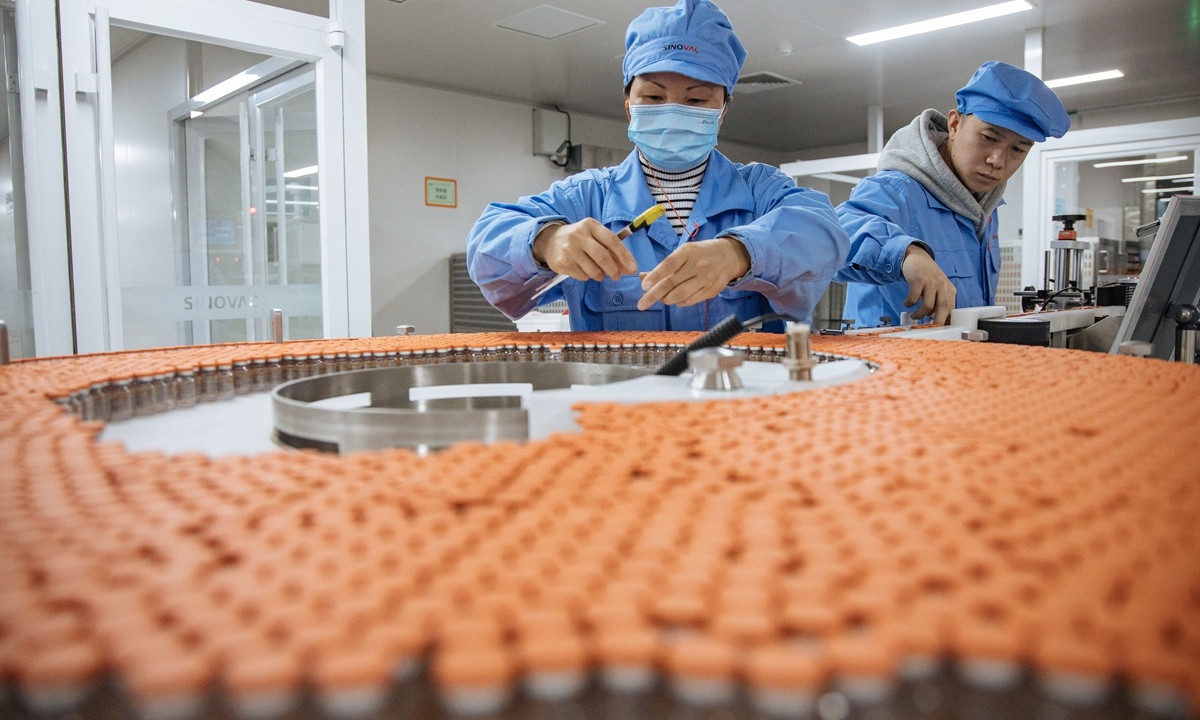 Early Thursday morning(Beijing time), Brazil's Butantan Institute announced that the vaccine developed by China's SinoVac is over 50 percent effective, making it eligible for approval and emergency use in Brazil. Butantan said the release of full data will be postponed up to 15 days. The Chinese company will gather and analyze data from trials in other countries like Turkey and Indonesia before finalizing a complete picture. Western media has immediately focused on hyping up "questions about transparency."

Brazil was the first country to complete phase III trials of SinoVac's vaccine. It has confirmed that the efficacy of the vaccine is over 50 percent, a requirement universally adopted to recognize a vaccine as useable. No serious side effect was reported during the phase III trial of SinoVac's vaccine. There were reports about an accident in Brazil, but it was soon proven to have nothing to do with the vaccine itself. Besides, although SinoVac delayed the release of detailed data in Brazil, it has nothing to do with fake data.

In addition to the vaccine being developed by SinoVac, there are four other Chinese vaccines in phase III trials. The biggest difficulty for China pertains to the fact that it has put the COVID-19 epidemic under control - hence China has to do the trials in foreign countries. This makes it hard to carry out trials and collect final data.

Pfizer said its vaccine was 95 percent effective, and this became a "standard" of Western public opinion to evaluate the vaccine developed by China, whose weakness in gathering data has also been constantly targeted.

US vaccines have their own weaknesses too. To begin with, samples used for phase III clinical trials of Pfizer's vaccine mostly came from the US. The company has the convenience to process relevant information, which had not been verified by a third party independently. Second, Pfizer vaccine is mRNA vaccine, which needs to be kept at minus 70 degrees Celsius in terms of transportation and storage. In other words, this is a vaccine designed for rich countries, rather than for developing countries. It must be pointed out that there were cases of severe allergic reactions after receiving Pfizer's jab. But these serious issues have not really been touched upon by Western media outlets. They're virtually ignored by them.

SinoVac's inactivated COVID-19 vaccine is safe and can be stored at a standard refrigerator temperature. It is cheap, which is especially suitable for use in developing countries. But these advantages are often ignored in Western public opinion fields, or played down as merely background information.

SinoVac's vaccine is to be promoted globally. Therefore, its international reputation is crucial. US and Western media outlets obviously hold an unfriendly stance and attitude toward Chinese vaccines. They question them rather than clarifying their strong points amid the current urgent pandemic situation. Fortunately, there have been no cases of severe accidents in the clinical trials of Chinese vaccines, despite challenges of trials in foreign countries amid the pandemic. Western public opinion will not treat Chinese vaccines in the same way they reported on side effects from Pfizer's vaccine.

This is unfair and not conducive to the current global fight against the virus. The reason is simple: the above attitude of Western public opinion institutions is driven by economic, political and ideological bias. They have transferred this attitude toward China to Chinese vaccines. However, jabs are urgently needed. The demanding storage conditions and production capacity of the US vaccine are far from satisfying the global demand. China's vaccine must become one of the main forces in the next stage so there is hope for the victory of humankind.

China's inactivated vaccine uses traditional, established technology. Pfizer's vaccine uses brand new technology that has never been used. New vaccines under traditional technologies usually take more than a year for trials. Pfizer's new vaccine trials were sped up faster than traditional vaccines. If SinoVac and Pfizer are compared with the same skeptical intensity, which one will face more questions?

To be honest, Pfizer's vaccine is the one that was introduced in a rush. People who received Pfizer vaccine are still experimenting for this new technology. The new technology may be more efficient, but the risks of using it are certainly much greater.

The most important thing for humanity is to get through this immediate crisis. The positive role that Chinese vaccines can play and the contributions they can make are obvious to all. It is believed that the strengths of each vaccine working together will make vigorous efforts to turn the tide, rather than their weaknesses will shape our future.