○ Pakistani students in China totaled 22,000 in 2017, making them the third-largest group of overseas students in the country
○ They enjoy scholarships, friendly environment and religious freedom in China 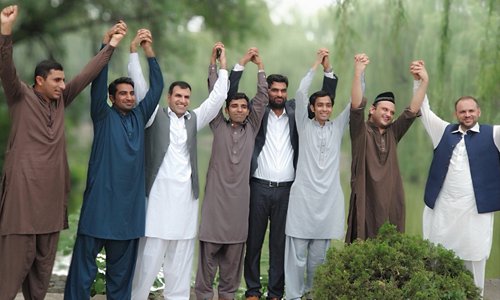 For many young people in Pakistan, the friendship between China and Pakistan is not just a slogan but a true emotion, as rising ranks of Chinese universities and job opportunities provided by Chinese firms have brought more and more Pakistani youth to further their studies in China.
"They [Chinese] welcome Pakistani people as brothers and sisters. So for me, China is heaven. China is the second home for Pakistani people," said Muhammad Furqan Rao, a Pakistani PhD candidate at School of Journalism and Communication, Tsinghua University, adding that he is quite satisfied with his study experience in Beijing.
Furqan noted to the Global Times that the rising ranks of Chinese universities, job opportunities offered by China-Pakistan Economic Corridor (CPEC) and the Belt and Road (B&R) initiative, as well as a friendly studying environment provided by the Chinese government were big factors for him to study in the country.
Furqan is one of the many Pakistani students now seeking higher education in China. According to the Embassy of the Islamic Republic of Pakistan Beijing, the total number of Pakistani students studying in China reached 22,000 in 2017, making Pakistani students the third-largest group of overseas students in the country. 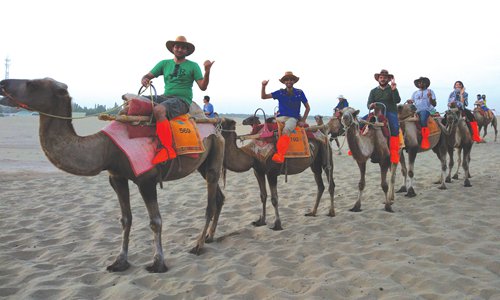 Hamid and friends visit a desert in Dunhuang, Gansu Province, in 2017.

Good reputation
People's Daily reported in May that currently 5,000 Pakistani students enjoy scholarships in China. It means that over 20 percent of Pakistani students studying in the country get a stipend.
Furqan said that in addition to scholarships, other alluring aspects are the improved reputation of Chinese universities, a friendly studying environment and a lower cost of living for Pakistani students in China.
According to the QS World University Rankings 2018, six Chinese universities are now in the Top 100, with three in the Top 50. Tsinghua University and Peking University are the Top 2 from China.
Pakistani PhD student at Peking University, Hamid Chohan, published six research articles on top international academic journals during his master's degree program just to get into the distinguished Chinese university, under the Chinese Government Scholarship (CGS).
Pursuing a doctoral degree in Pure and Applied Mathematics at the School of Mathematical Sciences in Peking University, Hamid said 3,500 yuan ($541) per month, including accommodations, tuition fee and medical services are enough for his life in Beijing.
"Chinese Scholarship Council provides me with an opportunity, good facilities and a reasonable amount of money. In return, I am doing serious research and working hard," he said.
Hamid's colleagues (Usman, Hu Lan and Fei) say that he is a smart and hardworking researcher. When the Global Times interviewed him, he was fasting for Ramadan and hardly sleeping at night in order to study and conduct research.
As a result, the 28-year-old from More Eminabad Gujranwala, a city of Punjab Province in Pakistan, took only 22 months to complete his doctoral program, which should have taken four years. This sort of hardworking spirit partially explains why Pakistanis receive a higher amount of Chinese scholarships every year.
Zamir Ahmed Awan, a Sinologist at the National University of Sciences and Technology, Islamabad, Pakistan, wrote on China Global Television Network that Pakistani students enjoy a good reputation in Chinese universities. "Their English language skills are very good and research approach excellent; the majority of them are obedient, well-mannered and approachable… hardworking and persistent are two of their qualities." 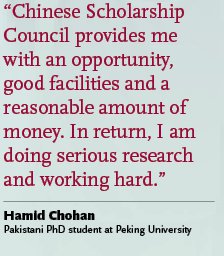 Employment competitiveness
There are also an increasing number of self-funded Pakistani students in China, which gives credit to the B&R initiative as well as CPEC.
"After the launch of CPEC, there are more business opportunities, more job opportunities and more international companies coming to Pakistan, especially Chinese companies. So if people are studying in Chinese universities, they will have a wider scope in their life," Furqan said.
CPEC is a framework of regional connectivity which has improved power, transportation systems with frequent and free exchanges of growth and people-to-people contact. Now it has moved to the second phase and will soon start with the establishment of Special Economic Zones that will directly aid the Pakistan population.
Furqan said that, before the launch of CPEC, Pakistanis were not aware of China's educational system. "They only came [to China] to do MBBS (Bachelor of Medicine, Bachelor of Surgery). After 2013, Pakistani people from all walks of life and from all majors have been coming here," he added.
Civil engineering, material sciences and environmental sciences are the most popular subjects among Pakistani students in China at present, said Furqan.
After the B&R initiative was proposed in 2013, a greater number of Chinese corporations moved to Pakistan under the new initiative. Hence, the demand for Pakistani talents who have both professional knowledge and proficient Chinese skills is rapidly increasing. Studying in China and claiming a Chinese university degree on the CV are huge pluses among HR directors.
The CPEC Portal reported in 2017 that the largest transportation project under the CPEC, the 392 kilometer-long Multan-Sukkur Section, would create 9,800 local jobs.
According to the Confucius Institute in Islamabad, Pakistan, the number of candidates who took HSK (Chinese Proficiency Test) was 3,600 in 2017, over eight times the number in 2012 (437 candidates). Hamid agrees that people who can speak Chinese and who have firsthand experience living in China will have a bigger advantage in terms of employment.
"Employers are well aware that a deep understanding of Chinese culture and its market is a big plus for those who want to become the world's next generation of leaders," Hamid said.
Religious freedom
During his stay in the US, Furqan was asked frequently why Pakistani people love China more than America. He told them that China's religious freedom and the mutual understanding of each other's cultures are major reasons.
"Beijing is like my second home because we can find so many mosques here to pray and to perform our religious duties… America is conservative in this regard. A few friends are studying in America, and they have a beard. They are facing different kinds of problems because the [police] check them randomly while they are walking on the streets," Furqan said.
"I read a piece of news in Western media that Muslims are restricted from fasting or preying like this in China, but there is nothing like that; there are no restrictions for Muslims to fast or perform their religious duties in China," he exclaimed.
According to Pew Research Center, 84 percent of Pakistanis have a favorable view of China and 80 percent consider China a partner to their country.
Despite some people holding a hostile attitude toward the B&R initiative and CPEC, Furqan defends these joint projects, stressing that they are no threat to Pakistan.
Instead, he emphasized their strategic importance. "Because of these projects, our country's security is being improved day by day. As Pakistanis, we see the B&R initiative and CPEC as good for the development of Pakistan and other regions as well," he said.
He also hoped CPEC will open doors in the future to bring the two nations much closer with each other.
Furqan's friend, Nishat Kazmi who is currently a Yenching scholar at Peking University, echoed this statement, saying "I think it represents another opportunity in the wake of anti-globalization sentiment being expressed in certain parts of the world. The B&R initiative presents an opening-up opportunity for the world, an opportunity to being committed to the idea of free, fair and mutually beneficial trade."