A year after a volcano on Hawaii's Big Island rained lava and gases in one of its largest and most destructive eruptions in recorded history, people who lost their homes and farms in the disaster are still struggling to return to their cherished island lifestyle. 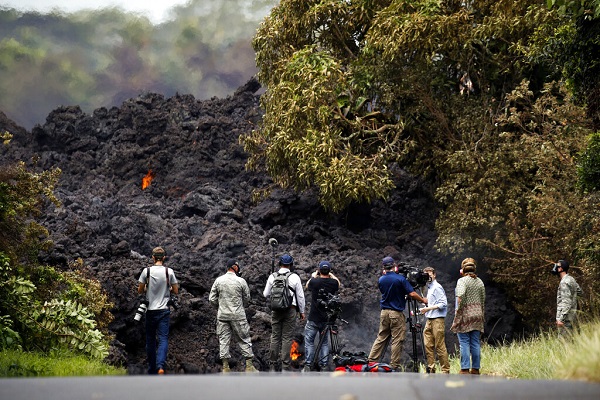 In this May 20, 2018 file photo, members of the media record a wall of lava entering the ocean near Pahoa, Hawaii. (File Photo: AP)

More than 700 homes were destroyed in the historic eruption, and most people will never move back to their land.

Over four months, Kilauea spewed enough lava to fill 320,000 Olympic-sized swimming pools, burying an area more than half the size of Manhattan in up to 80 feet (24 meters) of now-hardened lava. The molten rock reduced landmarks, streets and neighborhoods to a vast field of blackened boulders and volcanic shard.

But the disaster, which county officials estimate will cost about $800 million to recover from, affected more than just the people and places in the lava's path.

Dozens of nearby homes that were spared still sit empty, either cut off by surrounding flows, damaged by airborne debris or downwind of cracks that continue to spew toxic gases.

Big Island Mayor Harry Kim lost a home in the eruption and says people are just beginning to come to terms with the devastation.

"We as human beings wish for normal to come back," Kim said. "In a volcanic eruption, everything you know is no longer there."

The longtime mayor says many outsiders question why anyone would want to live on the side of an active volcano.

"This is and was a very beautiful place to live. It was special," Kim said. "It's not just a home, it's a lifestyle here." 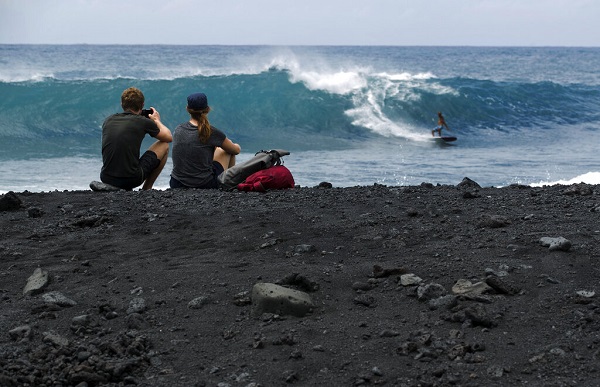 Among those whose lives were forever changed are Tisha Montoya and her family, who lived off the grid on several acres downslope from where the eruption began.

They had a large house and several cabins, along with greenhouses, pavilions and animal pastures. Montoya harvested different types of exotic fruit and had a pineapple garden, sheep, chickens, ducks, rabbits and Guinea pigs.

On May 4, the day after the eruption started, she evacuated when a 6.9-magnitude earthquake violently jolted the family's purple octagonal home. Lava was pouring from new cracks in the nearby Leilani Estates neighborhood, and toxic gases filled the air.

Her father, Edwin Montoya, stayed behind to care for the animals. He hoped the entire family would soon be able to return.

Edwin's children begged him to leave as the lava crept toward their property over the coming weeks. But he was committed to saving the animals, and he was prepared to die doing it.

"If it blows its top and I'm there at the time, I'm 76 years old, I've lived a good life, and if I have to go, I want to go," Edwin Montoya told The Associated Press last May. "I love Hawaii, and this is where I want to stay for the rest of my days."

As the lava neared, Edwin's focus turned from taking care of the animals to evacuating them. He left the day before a river of lava arrived and cut the farm in half. The molten rock eventually took nearly all the structures, including the home and all but one small chicken coop that Edwin built.

"It was very stressful to evacuate 100 animals out of here," Tisha told the AP of her father's death.

He woke her up one night because he was having trouble breathing. "We didn't make it to the hospital," she said. "He passed and then they said later it was a heart attack."

All roads to the family's farm are now cut off, leaving it accessible only by a two-hour hike through thick jungle.

"This was the most special spot on the whole land," she said as she paused to pray near the miles-long wall of lava covering her home. "So we buried him here as he wanted us to. His ashes, anyway, are sprinkled right over there on the edge, where the lava meets the green."

END OF THE ROAD

Mark and Jennifer Bishop's house sat atop a ridge in Leilani Estates, their deck looking out toward friends' homes in a valley.

The epicenter of the 2018 eruption — one of more than 20 places where the ground split open and released massive explosions of molten rock — is now in their front yard.

The eruption point, known as Fissure 8, created a towering cone that pumped out so much lava that it filled the valley in front of their property and flowed about 8 miles (13 kilometers) to the ocean.

"We used to be on the ridge. Now we're halfway down the hill," Mark Bishop said last week, looking up at the massive cone.

The Bishops split their time between the Big Island and Harmony, Minnesota, where they own a business that gives tours of scenic cave.

They were in Minnesota when the eruption began, so they watched news reports and aerial video as lava blasted from the ground near their home. A friend called one day to tell them the lava was headed directly toward their house.

The red-hot fluid oozed onto their property and stopped about 20 feet (6 meters) from the home. Theirs is now the last house on the street.

"We just feel really fortunate that our home wasn't taken," Mark Bishop said. "All of our neighbors to the north of us are all gone for like a mile-and-a-half wide."

Debris from the nearby eruption infiltrated the Bishops' home and caused extensive damage, but the couple has begun to replace furniture and appliances and recently moved back in.

"Our plans are to stay here, keep working on the home and do the repairs as necessary, and just try to get back on to a normal life again," Mark Bishop said.

Mark Figley bought his four-bedroom Leilani Estates home in 2016. A retired engineer who moved to Hawaii from Alaska, he envisioned spending his golden years working in his woodshop and fixing up old cars.

Now, he said, the large craftsman-style home with vaulted ceilings and meticulously designed details is a complete loss — even though it was spared when the lava stopped in the front yard.

Gases and debris from a string of eruptions across the street did extensive damage to his home. But that's not the reason he had to buy a new house while continuing to pay the $500,000 mortgage on his now-empty dream home.

"The main reason I can't live here is because of air quality," he said.

The prevailing winds bring the volcanic gases toward his Leilani Estates house, which sits in a small valley where the fumes accumulate and build up in his home.

"If I'm in there for 15 minutes, I will have a bad headache," Figley said. "It's not a livable circumstance for me."

So, for now, the home on the edge of a lava flow remains vacant as Figley settles into his new Big Island home, a little farther from Kilauea volcano.