Harry and Meghan say they won’t cooperate with UK tabloids 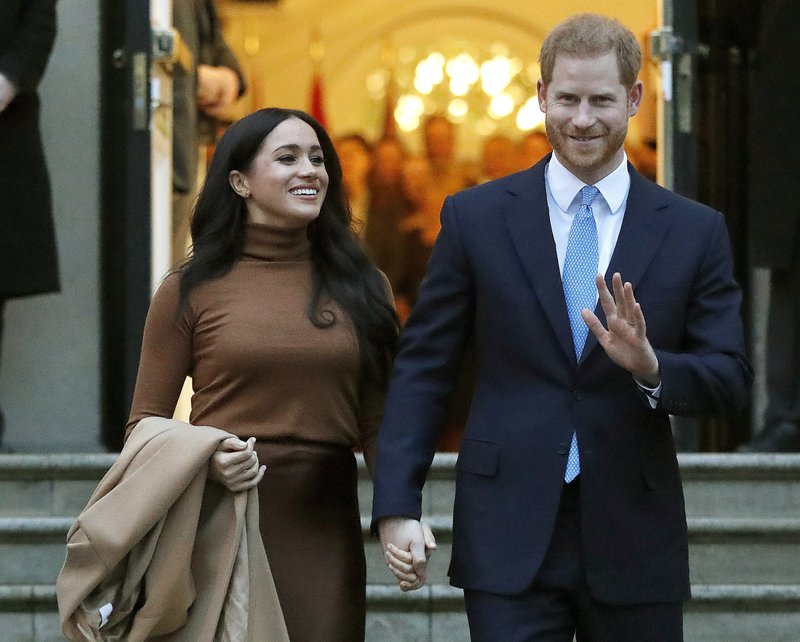 In this Tuesday, Jan. 7, 2020 file photo, Britain's Prince Harry and Meghan, Duchess of Sussex leave after visiting Canada House in London. The Duke and Duchess of Sussex say they will no longer cooperate with several British tabloid newspapers because of what they call “distorted, false or invasive” stories. Meghan and Harry have written to the editors of The Sun, the Daily Mail, the Daily Express and the Daily Mirror saying they won’t “offer themselves up as currency for an economy of click bait and distortion.” They say stories based on “salacious gossip” have upended the lives of acquaintances and strangers alike. (Photo: AP)

The Duke and Duchess of Sussex have announced they will no longer cooperate with several British tabloid newspapers because of what they call “distorted, false or invasive” stories.

Meghan and Prince Harry told the editors of The Sun, the Daily Mail, the Daily Express and the Daily Mirror in a letter that they won’t “offer themselves up as currency for an economy of click bait and distortion.” The couple’s representative released a copy of the letter on Monday.

Harry and Meghan wrote that previous stories the newspapers published based on “salacious gossip” had upended the lives of acquaintances and strangers alike. They said they would have “zero engagement” with the publications going forward but “believe that a free press is a cornerstone to any democracy.”

Harry, who is a grandson of Queen Elizabeth II and sixth in line to the British throne, married the American actress Meghan Markle at Windsor Castle in May 2018. The televised ceremony was watched around the world.

The couple later said they found the scrutiny they received from the British media as tipping into harassment and intolerable.

Their decision to freeze out the tabloids came as court papers revealed how Meghan and Harry pleaded with her father, Thomas Markle, to stop talking to the press in the days before their wedding. The pair warned him that speaking to the media would backfire and tried to help him, according to text messages filed in Meghan’s lawsuit against the Daily Mail’s publisher, Associated Newspapers.

She is suing for invasion of privacy over a 2018 article that included portions of a letter she had written to her father. A hearing in the case is due to be held Friday in a London court. Associated Newspapers denies infringing on Meghan’s privacy.

Thomas Markle was scheduled to walk his daughter down the aisle at the wedding, but pulled out at the last minute, citing heart problems. The former television lighting director has given occasional interviews to the media, complaining in December 2018 that he’d been “ghosted” by Meghan after the wedding.

The court documents included texts in which Harry tried to smooth over a family embarrassment after a Mail on Sunday story revealed that the prince’s future father-in-law helped stage paparazzi pictures of himself preparing for the wedding.

“Tom, Harry again! Really need to speak to u. U do not need to apologize (sic), we understand the circumstances but ‘going public’ will only make the situation worse,” Harry texted on May 15.

“If u love Meg and want to make it right please call me as there are two other options which don’t involve u having to speak to the media, who incidentally created this whole situation. So please call me so I can explain. Meg and I are not angry, we just need to speak to u. Thanks,” he wrote. “Oh any speaking to the press WILL backfire, trust me Tom. Only we can help u, as we have been trying from day 1.”

Markle did not reply, but issued a statement through the U.S. celebrity news website TMZ saying he had been admitted to the hospital after suffering a heart attack. The court documents suggest Meghan was not aware he was hospitalized before TMZ reported it.

“I’ve been reaching out to you all weekend but you’re not taking any of our calls or replying to any texts…” she texted her father on May 15. “Very concerned about your health and safety and have taken every measure to protect you but not sure what more we can do if you don’t respond…Do you need help? Can we send the security team down again? I’m very sorry to hear you’re in the hospital but need you to please get in touch with us….What hospital are you at?”

Markle refused the offer of security, but said he was OK, according to the legal filing.

Meghan said her phone received a missed call at 4.57 a.m. on the morning of her wedding and that she did not speak with him again except in writing.

Harry has long had an uncomfortable relationship with the media, which he blames for the death of his mother, Princess Diana. She died in a car crash in Paris in 1997 while being pursued by paparazzi.

Harry’s unhappiness with the media increased after he began dating Markle, the star of the TV legal drama “Suits.” In 2016, he accused the media of harassing his then-girlfriend, and criticized “racial undertones” in some coverage of the biracial Markle.

In January, they announced they planned to quit as senior royals, seek financial independence and move to North America. The split became official at the end of March, and the couple are currently in California, where Meghan was raised.

But Ian Murray, executive director of Britain’s Society of Editors, said “there is no escaping their actions here amount to censorship and they are setting an unfortunate example.”

“By appearing to dictate which media they will work with and which they will ignore they, no doubt unintentionally, give succor to the rich and powerful everywhere to use their example as an excuse to attack the media when it suits them,” he said.