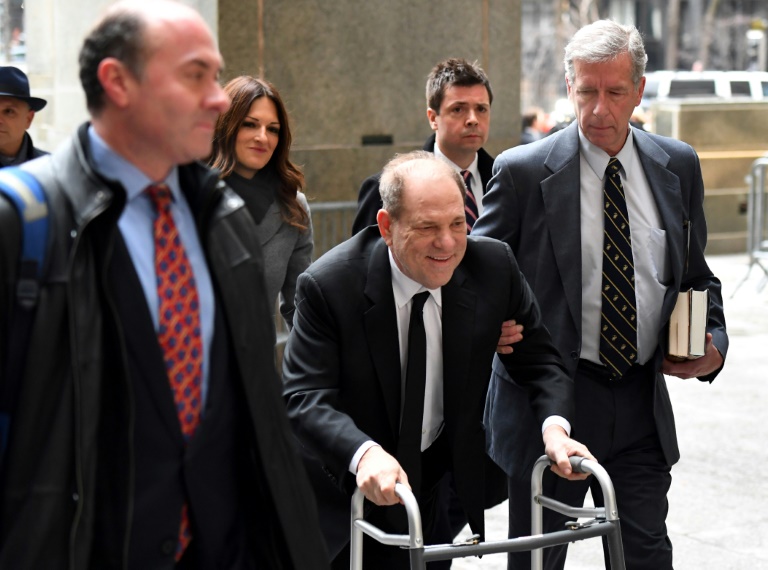 Harvey Weinstein arrives using a walker at the Manhattan Criminal Court, where he faces sexual assault charges that could see him jailed for weeks. (Photo: AFP)

The disgraced movie mogul entered the New York state courthouse wearing a dark suit and using a walker, more than two years after a slew of allegations against him triggered the #MeToo movement that led to the downfall of dozens of powerful men.

Protestors led by actress Rosanna Arquette -- one of Weinstein's most prominent accusers -- gathered outside the Manhattan court wielding signs with slogans like "Justice for survivors."

Almost 90 women, including Angelina Jolie and Gwyneth Paltrow, have accused the 67-year-old of sexual misconduct since The New York Times detailed claims against him in October 2017.

But Weinstein, once one of Hollywood's most influential people, is being tried on charges related to just two women, highlighting the difficulty of building cases around incidents that took place years ago.

The second alleged victim is anonymous. She says Weinstein, the co-founder of Miramax Films, raped her in a New York hotel room in March 2013.

"The Sopranos" actress Annabella Sciorra will also give evidence as the prosecution seeks to convince the jury that Weinstein engaged in a pattern of predatory sexual behavior.

A conviction would signal a watershed moment for the #MeToo movement in the fight against sexual harassment and abuse of power in Hollywood and beyond.

"This trial is critical to show that predators everywhere will be held accountable and that speaking up can bring about real change," 25 of Weinstein's accusers said in a statement Friday.

Since the #MeToo movement took hold in the wake of a deluge of allegations against Weinstein, almost all men felled from their positions, be it in the world of entertainment or business, have escaped prosecution.

The only other trial on the horizon is that of R&B singer R. Kelly, who was charged last year with several assaults on young women, but allegations of sexual impropriety have dogged him for years.

American comedian Bill Cosby was sentenced to at least three years in prison in September 2018, although proceedings had started in late 2015, two years before the post-Weinstein surge of allegations.

Weinstein's trial will be closely watched.

Some 150 journalists, on top of regular court reporters, have requested access to the courtroom which only seats around 100.

Accusers and #MeToo activists could also crowd the public benches in support of Weinstein's alleged victims who are expected to endure brutal cross-examinations.

Weinstein, who has always maintained that his sexual relationships were consensual, is unlikely to testify.

His defense team has been trying to undermine the allegations of the two accusers on the charge sheet since long before the start of the trial.

They have produced emails and text messages which they say show that both remained in friendly contact with the accused for several months after the alleged events.

Monday's hearing is expected to deal with logistical matters and should be short.

The first battle will be over jury selection, which is expected to start on Tuesday and could take two weeks.

In an email interview with CNN, published Saturday, Weinstein suggested he may be able to rebuild his career in the movie business if acquitted.

"If I can get back to doing something good and building places that help heal and comfort others, I intend to do so," he wrote.