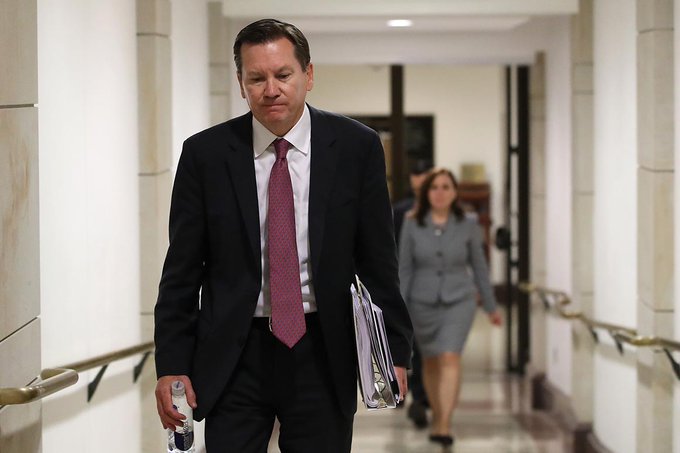 WASHINGTON, April 5 (Xinhua) -- The head of the U.S. intelligence watchdog who reported to Congress about a whistleblower complaint, which eventually led to President Donald Trump's impeachment, said Sunday that the president fired him just because he fulfilled his duty "faithfully."

"It is hard not to think that the President's loss of confidence in me derives from my having faithfully discharged my legal obligations as an independent and impartial Inspector General, and from my commitment to continue to do so," Michael Atkinson, the Intelligence Community Inspector General (ICIG), said in a statement.

Trump informed the Senate and House intelligence committees in a letter Friday that he was removing Atkinson from his duties. "This is to advise that I am exercising my power as President to remove from office the Inspector General of the Intelligence Community, effective 30 days from today," he wrote.

Atkinson notified Congress in September of a whistleblower complaint he had received from an anonymous intelligence official, who expressed concerns that Trump's dealings with Ukraine amounted to soliciting foreign interference in the 2020 U.S. election and undermined U.S. national security.

The complaint triggered the impeachment investigation into Trump, who was subsequently impeached by the Democratic-controlled House on Dec. 19 with two articles of impeachment accusing him of "abuse of power" and "obstruction of Congress," respectively. He was acquitted on Feb. 5 as the Senate, where the Republicans hold the majority, concluded its impeachment trial.

"I thought he did a terrible job. Absolutely terrible. He took a whistleblower report, which turned out to be a fake report ... and he brought it to Congress with an emergency," the president said at a White House briefing. "Not a big Trump fan, that I can tell you."

"Trump's dead of night decision to fire ICIG Michael Atkinson is another blatant attempt to gut the independence of the Intelligence Community and retaliate against those who dare to expose presidential wrongdoing," Schiff said. "It puts our country and national security at even greater risk.

Nominated by Trump in November 2017, Atkinson has served as the ICIG since May 17, 2018. The ICIG conducts investigations and reviews of activities within the purview of the Director of National Intelligence, while handling whistleblower complaints from within the intelligence community.