Public health experts expressed concern Friday about President Donald Trump's largely mask-free, socially un-distanced Republican convention event on the White House lawn, saying some of his 1,500 guests may have inadvertently brought and spread the coronavirus to others. 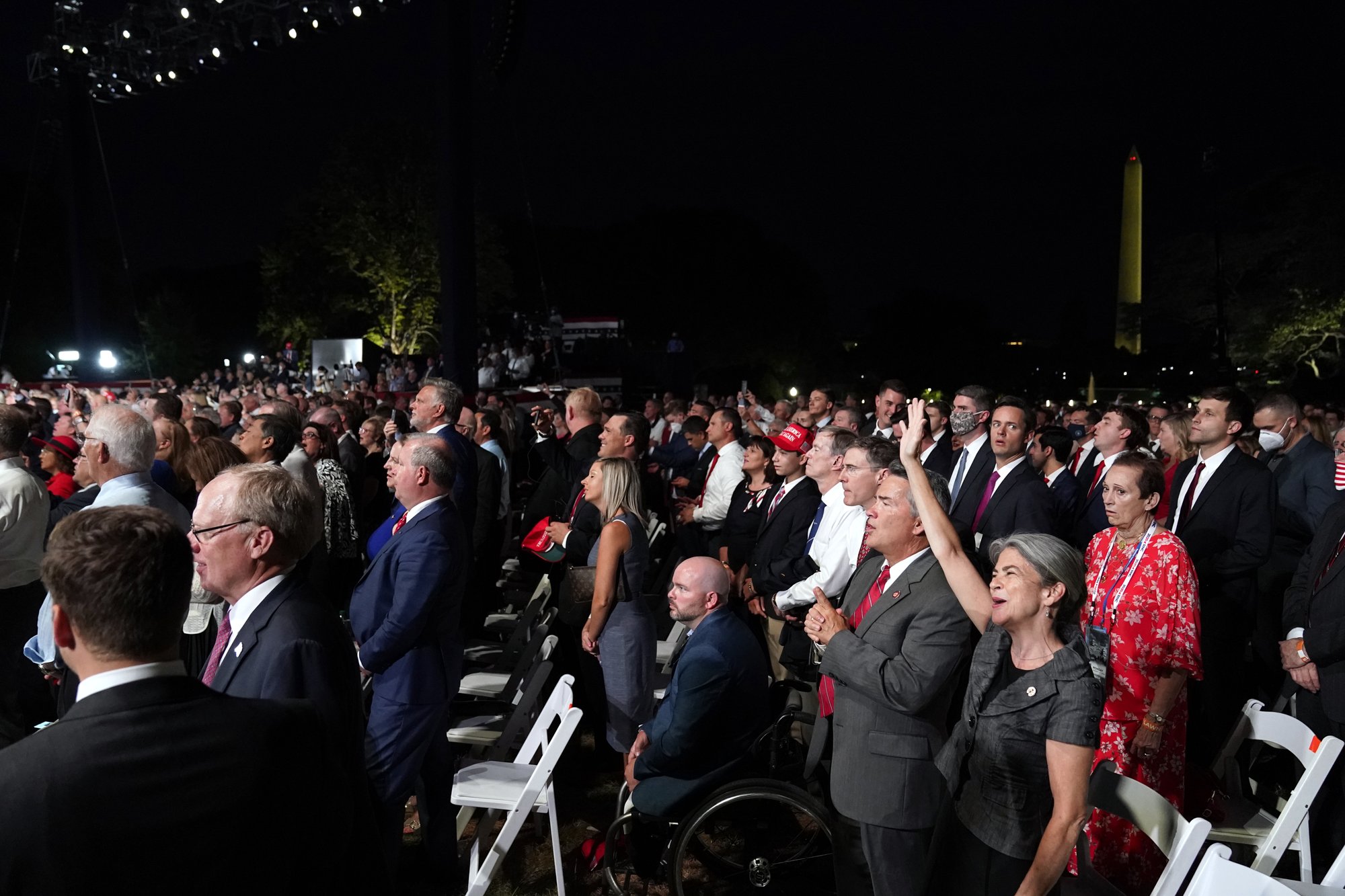 With the Washington Monument in the background, a crowd on the South Lawn of the White House watches the Republican National Convention as it plays on a screen on the fourth day of the convention, Thursday, Aug. 27, 2020, in Washington. (Photo: AP)

"There almost certainly were individuals there who were infected with COVID-19 but don't know it," said Dr. Leana Wen, an emergency physician and public health professor at George Washington University..

"I worry about these individuals infecting one another and most certainly going back to their home," said Wen, who previously served as Baltimore's health commissioner.

Trump delivered his speech accepting the GOP presidential nomination at the Thursday night event, which continued a pattern of flouting coronavirus safety guidelines.

Only those guests the White House expected to be in "close proximity" to Trump and Vice President Mike Pence were to be tested for COVID-19, the disease caused by the virus.

Though public health officials have said outdoors is safer than indoors, the Centers for Disease Control and Prevention also puts  the risk of COVID-19 spreading at its highest at large outdoor events and in-person gatherings where people cannot stay 6 feet apart and attendees come from out of town.

Trump's campaign issued a statement from Dr. Robert Darling, chief medical officer of Patronus Medical Corp., who said the Republican National Committee's protocols are in "full compliance" with multiple guidelines issued by the CDC, the District of Columbia health department and other leading health authorities. He provided no details.

The campaign said Darling, a former White House physician to President Bill Clinton, has been working with the RNC to make sure the proper protocols are in place at convention sites.

In Charlotte, North Carolina, where delegates met Monday to nominate Trump for reelection, the city required a process to be put in place to trace people's contacts in the event of an outbreak, including requiring attendees to wear trackers on their lanyards.

Masks and social distancing requirements were also in place, and attendees were required to complete a daily temperature screening and wellness questionnaire. They were tested before departing for Charlotte and retested upon arrival.

Out of nearly 800 coronavirus tests administered, two attendees and two people supporting the Charlotte event tested positive after they arrived, the county health department said. The four individuals were instructed to isolate, and any known close contacts were notified and given instructions on quarantining, the department said.

Public health officials also expressed concern over a march in Washington on Friday to commemorate the 1963 March on Washington for Jobs and Freedom. The size of the event had been scaled back because of coronavirus concerns.

Participants underwent temperature checks as part of coronavirus protocols. Organizers also reminded the marchers to practice social distancing and wear masks, though many were bare-faced and packed together.

Before a Trump rally Friday night in New Hampshire, a campaign advisory said masks for attendees were "required" in accordance with Republican Gov. Chris Sununu's executive orders, and would be provided.

Before Trump arrived, many in the crowd did not put their masks back on after singing the national anthem. They later booed when a campaign staffer called on them to do so.

Wen, the former Baltimore health official, said the White House event gives the public the false impression that precautions are no longer necessary.

"We, in public health, have been trying to share, to put out guidance on what to do, and when we have the president of the country and top leaders doing exactly what we are asking people not to do, how can we be seen as credible?" she asked.

On Friday, North Carolina Sen. Thom Tillis said he "fell short of my own standard" and apologized for not keeping his face mask on at the White House.

Tillis, who is in a tough reelection bid against Democrat Cal Cunningham, has been consistent about talking up face coverings as a key method to slow the spread of COVID-19.

Tillis' campaign tweeted a picture of the first-term senator wearing a mask on the White House lawn on Thursday before Trump's speech. But other media outlets later showed images of the crowd during the speech and Tillis was seen not wearing his mask.

"I thought it was very hard not to recoil at those images," said Dr. Howard Koh, a public health professor at Harvard and a former assistant secretary at the Department of Health and Human Services under President Barack Obama.

Koh said one mitigating factor was that Trump held the event outdoors.

He said wearing facial coverings during outbreaks is expected behavior in some Asian societies and social distancing, wearing masks and avoiding large crowds are new social norms that can save lives in the United States as well.

Koh said the same guidance applies to protests, but that moving around during demonstrations might help curb the spread of the virus.