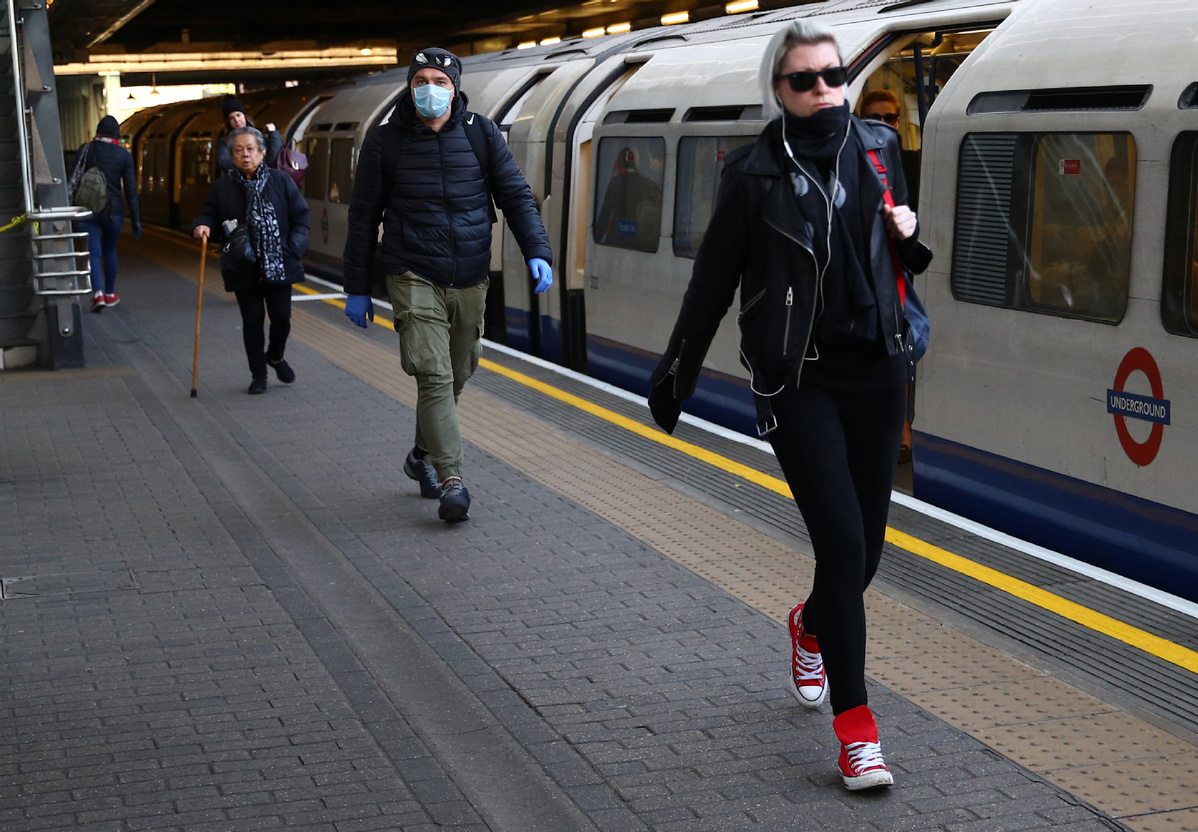 A commuter wearing a protective face mask with people on a platform at Hammersmith underground station as the spread of the coronavirus disease (COVID-19) continues, London, March 24, 2020. (Photo: Agencies)

Public health experts in the United Kingdom are warning that some sick people may be slow to seek medical attention during the COVID-19 crisis because of worries over discrimination.

Since the outbreak began, there have been numerous reports of racism and violence against East Asian people in the UK.

Earlier this month, London's Metropolitan Police released images of four men linked to the assault of Jonathan Mok, a 23-year-old student from Singapore studying at University College London. Mok said his attackers told him "I don't want your coronavirus in my country" before punching him in the face.

Edmond Ng, a disease statistician at the London School of Hygiene and Tropical Medicine, or LSHTM, said that visiting staff from China have been verbally abused on the streets of London. Ng is fearful that this hostile environment will discourage Chinese people and other Asians from reporting illnesses.

"This type of discrimination can have significant negative impacts on the effectiveness of our response to the outbreak," Ng told China Daily. "Stigmatization may alter the health-seeking behavior of those being discriminated against and may contribute to an increase in the disease spreading."

Leesa Lin, a social epidemiologist at the LSHTM, says that discrimination is a well-documented problem during epidemics, when "victims can become cast as the problem itself, as opposed to the victims of the problem.

"It has torn society apart, many expats who fit this profile feel unsafe and unwelcome in their respective countries around the world and many have f

led the UK," Lin told China Daily. "It creates an untrue impression that some members of society have somehow done something wrong or are less human than the rest of us, which feeds stigma and undermines empathy."

Lin said that "anyone in a position of leadership should be proactive and take a stand on the issue".She said the problem has not been helped by United States President Donald Trump and some media organizations referring to the disease as "Chinese virus".

"This is absolutely inappropriate," said Lin. "Politicians who refer to the disease as 'the Chinese virus' not only hurt the members of sub-communities within their own countries, they also hurt the possibility of international collaboration that could have helped their own people."

Lin says that East Asian nations have now received more imported cases of the disease from the rest of the world than they have exported, a phenomenon known as the second wave.

"By naming the disease the 'Chinese virus', some politicians and outlets are distracting from their own responsibilities and lack of epidemic preparedness," she said.

Ng said the naming of a new disease should not be made in reference to or be associated with any specific group of people.

"The one thing that viruses do not do is discriminate," he said. "They do not care about one's race, faith, sexual orientation, or country of origin. We are all just as likely to get the virus as each other. Racism itself spreads like a virus. We will only succeed in controlling the pandemic of COVID-19 through unity across all communities by spreading empathy and compassion over hate and division at this unprecedented time."

This week the United Nations called on authorities in all nations to address xenophobia during the pandemic.

"COVID-19 does not discriminate, and nor should our response, if it is to succeed," the UN Network on Migration said in a statement, adding that migrants who experience prejudice may be less willing to access healthcare or provide information on their health status.

"The inclusion of all migrants and marginalized groups is necessary in all aspects of the response to COVID-19, whether we are looking at prevention, detection, or equitable access to treatment, care or containment measures, or safe conditions of work," the UN body said.