Healthcare workers subjected to abuse from Trump supporters in US West 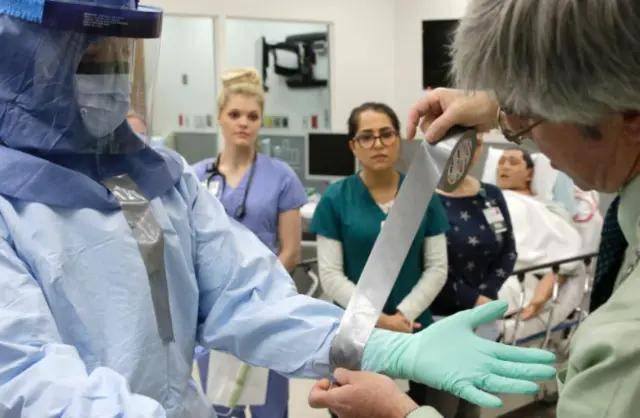 DENVER, the United States, April 24 (Xinhua) -- When US President Donald Trump encouraged his angry supporters to protest against their own state governments last weekend, he never thought they would be met by a small army of masked doctors and nurses.

That was what happened in many cities across the country, and those brave healthcare workers went viral on internet this week.

"I was so surprised by the amount of anger directed at me," Lauren Leander, a nurse at Banner University Medical Center in Phoenix, Arizona, told CBS News.

Leander took a hand-full of her colleagues to counter-protest in front of the Capitol building, and was soon surrounded by a horde of screaming protesters waving American flags and pro-Trump signs.

A YouTube video that went viral Thursday showed frontline medical workers in several US cities - many who have seen patients die from COVID-19 - being taunted and jeered by protesters who defied local stay-at-home orders to protest at their state capitols.

On Friday, US COVID-19 deaths topped 50,000. Stories from inside emergency rooms across the nation have been devastating.

"You are the virus - traitors - no shame," one woman screamed at a nurse, who stood arms crossed, feet planted firmly apart, at Phoenix's state capitol building last Sunday.

"Fake nurses - actors," another man yelled at two women nurses - at a protest in downtown Denver.

"Trump 2020, Trump 2020" was chanted by the crowd as it surrounded and intimidated the nurses, waving American flags and invading their personal space, the YouTube video showed.

Across the country, social media lit up like a Christmas tree as healthcare workers were thanked repeatedly for their service, and the antics of the protesters was denounced.

A YouTube video posted Wednesday showed a nurse at the Pennsylvania state capitol in tears, describing a patient she had just seen die, and calling the protesters "heartless."

In Denver, on Thursday, as the sun set over the Rocky Mountains, hundreds of police and firetrucks with lights and horns blaring drove by the University of Colorado Anschutz Medical Campus, en masse to show their support.

During the past week, the US Air Force Thunderbirds - America's most elite fighter pilots, based out of the Air Force Academy in Colorado Springs - flew over hospitals in Denver and Las Vegas in dramatic formation - to show their support for frontline hospital workers.

These national displays of solidarity and support for hospital workers somehow escaped the notice or interest of Trump's diehard base of supporters.

Astoundingly, the protests, encouraged last week by Trump, fly in the face of his own national pandemic expert, Dr. Anthony Fauci, who has encouraged Americans to stay home to stem the tide of the virus.

"If you jump the gun and you go into a situation with a big spike, you are going to set yourself back," the National Institute of Allergy and Infectious Diseases Director said Monday, after the protests.

The United States is not out of the woods yet.

On Thursday, food distribution giant Tysons closed its largest pork producing facility in Iowa, after 347 cases were traced to the plant of 2,800 people.

The spike in recent days has been particularly noticeable in San Francisco, where the case count in the city swelled by 69 on Thursday to 1,302, the second-largest daily increase since last week, the report noted.

But the anti-quarantine rallies this past weekend emphasized that America and its businesses were going broke, that America was on the downside of the coronavirus curve, and America needed to get back to work.

"It doesn't make any sense," Maryland Governor Larry Hogan, a Republican, said Tuesday, of the president encouraging the protests or the words behind them.

"The president's policy says you cannot reopen, under his plan, unless you have declining cases for 14 days, which those states and mine do not have," he told the media.

"So then to encourage people to go protest the plan on Thursday you made recommendations on - doesn't make any sense," he added.