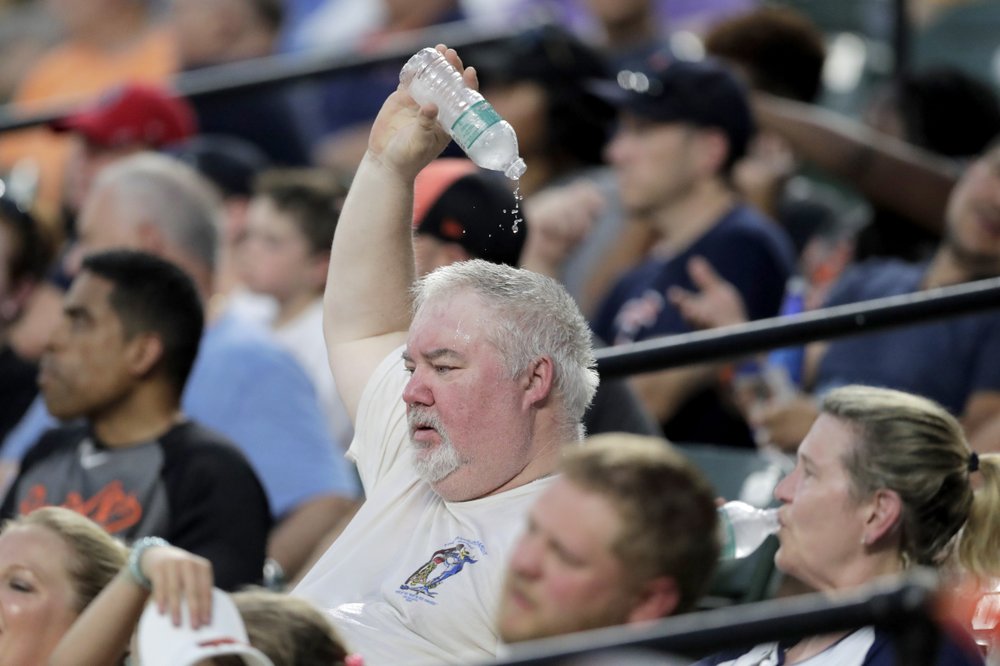 A spectator drops water on his head while watching the fourth inning of a baseball game between the Baltimore Orioles and the Boston Red Sox in hot weather, Saturday, July 20, 2019, in Baltimore. (Photo: AP)

The US East Coast on Sunday sweated through another day of extreme heat and humidity as organizers in Boston canceled a benefit run, Delaware Civil War re-enactors got the day off and the New York Police Department implored residents to take it easy.

“Sunday has been canceled,” the NYPD jokingly tweeted . “Stay indoors, nothing to see here. Really, we got this.”

The central part of the country, meanwhile, enjoyed some relief as a cold front moved steadily southward and eastward across the country, bringing down the temperatures. But the cooler weather settling in Monday and Tuesday is also bringing severe storms packed with powerful winds and heavy rains that have already caused damage in the Midwest. The National Weather Service warns flash flooding might be possible in some areas.

“There’s no point being out,” Washington, D.C., bus driver Ramieka Darby remarked while taking a quick break amid temperatures of nearly 100 degrees (37.8 Celsius).

Nearby, Jack Ogten was among a steady stream of tourists milling around outside the White House. Undeterred by the stifling heat, the resident of the Netherlands joked he’d lost about 22 pounds (10 kilograms) from sweating after just one day of sightseeing.

In New York City, where all eyes were on the power grid even before the hot weather following a Manhattan blackout last weekend, electricity company Con Ed reported roughly 27,000 customers were without power as of Sunday evening because of scattered outages, the vast majority in the boroughs of Brooklyn and Queens. 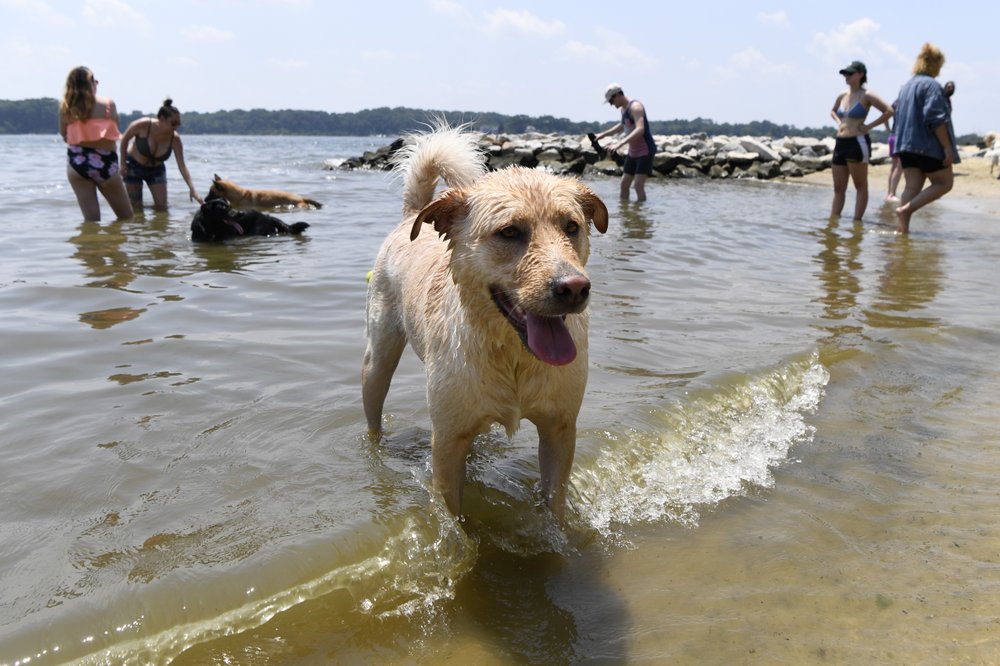 Con Ed said it reduced voltage by 8% in those areas to maintain service as repairs are made and asked those customers to turn off non-essential appliances to conserve power.

New York City Mayor Bill de Blasio tweeted that the “accumulated heat and strain from the past few days has built up in the electrical equipment.”

The city also directed office buildings to set thermostats no lower than 78 degrees (26 degrees Celsius) through Sunday to reduce strain on its electrical grid. A day earlier, a commemoration of the 1969 moon landing planned for Times Square and an outdoor festival featuring soccer star Megan Rapinoe and musician John Legend were nixed due to the heat.

And police in one Boston suburb posted a tongue-in-cheek request on their Facebook page. “Due to the extreme heat, we are asking anyone thinking of doing criminal activity to hold off until Monday,” Braintree police wrote Friday. “Conducting criminal activity, in this extreme heat is next level henchmen status, and also very dangerous.” 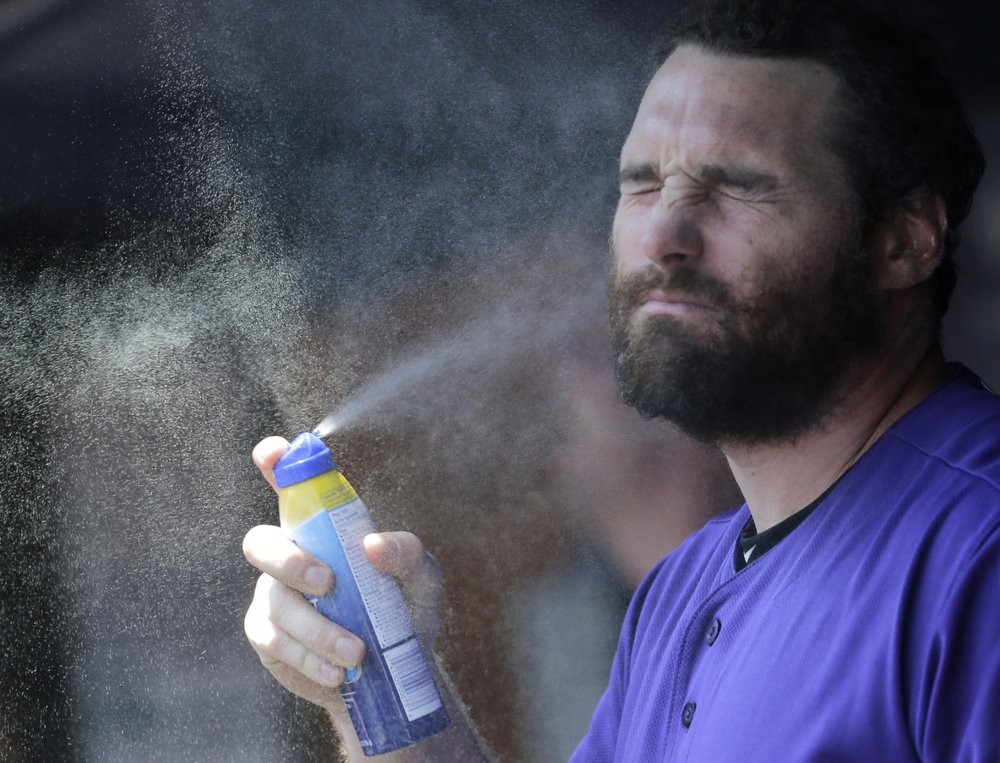 In Pennsylvania, nine firefighters were treated for heat exhaustion and six transported to a hospital for treatment while fighting a house fire in sweltering conditions Saturday. Several hundred people were also evacuated from a retirement community Saturday because of a power outage that may have been heat-related.

In New Hampshire, rescue crews helped a 29-year-old hiker late Saturday after he was overcome by the heat in the White Mountain National Forest.

In New Jersey, the Oceanic Bridge over the Navesink River was closed Saturday evening after it got stuck open. Monmouth County officials say heat caused expansion of the metal encasing the drawbridge, which is a popular route for residents and beachgoers.

The heat even prompted Delaware officials to close Fort Delaware State Park, which served as a Union prison camp during the Civil War. Temperatures were simply too high for costumed interpreters who wear wool garb to work safely this weekend, officials said.

The heat relented early Sunday in the northern reaches of New England.

A Canadian cold front brought thunderstorms Saturday evening that dropped temperatures across northern Vermont and upstate New York. A heat advisory remained in effect for southern sections of Vermont, New Hampshire and Maine for much of the day, however.

And in many parts of the country, it’s not expected to get much better when the sun goes down: temperatures are expected to remain at or above the high 70s overnight (26 degrees Celsius).

Meanwhile, parts of the Midwest are dealing with the effects of damaging winds and rain that swooped in with the cold front that’s breaking up the heat wave.

In Milwaukee, utility crews restored power to more than 48,000 customers in the eastern part of the state. But around 56,000 customers were still without power Sunday after more than 700 wires, 50 power poles and over 600 trees or branches were taken down in thunderstorms, officials said.

In Michigan, power might not be restored for everyone until Tuesday.

Utility companies DTE Energy and Consumers Energy said roughly 500,000 customers are still without power after thousands of power lines were downed in a storm that was worst to hit the region since 2017.