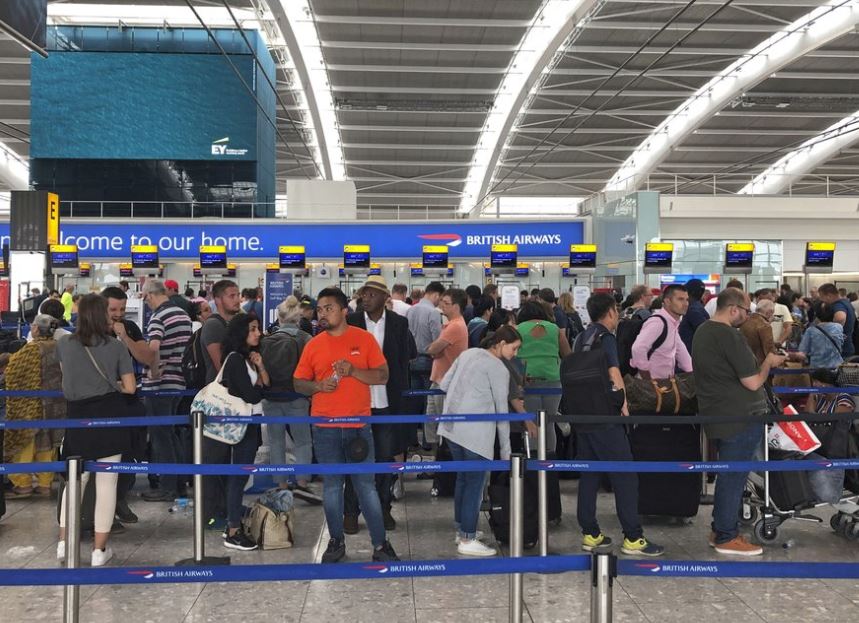 The temperature’s dropping but Europe’s troubles aren’t over: A record-busting heat wave gave way Friday to thunderstorms and hailstorms, bringing the Tour de France to a dramatic halt and causing trouble at British airports and beyond on one of the most hectic travel days of the year.

It marked the second day of travel disruptions in European capitals after one of the hottest days in memory, when many places in Western Europe saw temperatures soar beyond 40 degrees Celsius (104 degrees Fahrenheit). Compounding that, the weekend is a big travel moment across Europe as families head off for their summer holidays now that schools have broken up for the academic year.

After several hours of flight restrictions over UK airspace Friday, the national air traffic controller NATS said it had fixed the technical issue and would be able to safely increase traffic flow.

“Weather is continuing to cause significant unrelated disruption across the country and more widely across Europe, which has further complicated today’s operation,” NATS said in a statement.

In France, suffocating heat turned into slippery storms Friday — including a hailstorm on the Tour de France route in the Alps that was so sudden and violent that organizers ordered a stop to the world’s premier cycling event.

As riders careened down hairpin turns after mounting a 2,770-meter (9,000-foot) peak, a storm lashed the valley below. A snowplow worked desperately to clear the route of slush, but organizers deemed it too dangerous to continue.

Weather almost never stops the three-week race, and the decision came on a day of high-drama in which race leader Julian Alaphilippe lost his top spot and accompanying yellow jersey just ahead of Sunday’s finale.

British rail commuters were also facing delays after the heat wave prompted Network Rail to impose speed restrictions in case the tracks buckled. Engineers from the company have been working to get the network back to normal after the track temperatures soared to up to 20 C (68 F) more than the air temperature.

“With the railway being made of metal and moving parts, the sustained high temperatures took their toll in places,” said Phil James of Network Rail. “Everything was done to keep trains moving where possible, and last night hundreds of staff were out fixing the damage and repairing the railway ready for today.”

Passengers using Eurostar services to and from Paris were also facing “severe disruption” due to overhead power line problems in the French capital, which on Thursday recorded its hottest day ever with the temperature rising to 42.6 C (108.7 F).

Britain, along with much of Western Europe, endured potentially its highest temperature ever on Thursday. The country’s weather service said a provisional temperature of 38.7 C (101.7 F) was recorded at Cambridge University Botanic Garden in eastern England, which if confirmed would be the highest ever recorded in the UK. The existing record for the UK — 38.5 C (101.3 F) — was set in August 2003.

It said “quality control and analysis over the next few days” will determine whether the reading becomes official.

Authorities across Europe were looking to address the consequences of Thursday’s soaring temperatures, as records that had stood — in some cases for decades — fell.

Europeans and tourists alike jumped into fountains, lakes, rivers or the sea to escape a suffocating heat wave rising up from the Sahara. Britain, France, Belgium, Germany, the Netherlands — all places where air conditioning is not typically installed in homes, cafes or stores — strained under the heat.

France faced a spike in fires in forests and farm fields that left a dozen firefighters injured, and a rise in drownings. Interior Minister Christophe Castaner linked the country’s 60 drowning deaths so far this month indirectly to the current heat wave, noting a rise in people drowning in unguarded bodies of water as they seek relief from high temperatures, some of whom suffer thermal shock when they jump from hot air into cold water.

In Belgium, a 66-year-old woman died near her caravan close to the beach.

The woman was found by a neighbor late Thursday afternoon after she had apparently been basking in the blazing sun. The incident happened in Middelkerke on the Belgian coast as temperatures rose in the region to over 40 C (104 F).

Middelkerke police commissioner Frank Delva told The Associated Press that the death is “very clearly linked to the heat.”

Emergency services rushed to the scene but could not resuscitate the woman.