LONDON, July 20 (Xinhua) -- Britain's national weather service the Met Office has issued its extreme heat weather warning as sweltering conditions have continued for several days in parts of the country. 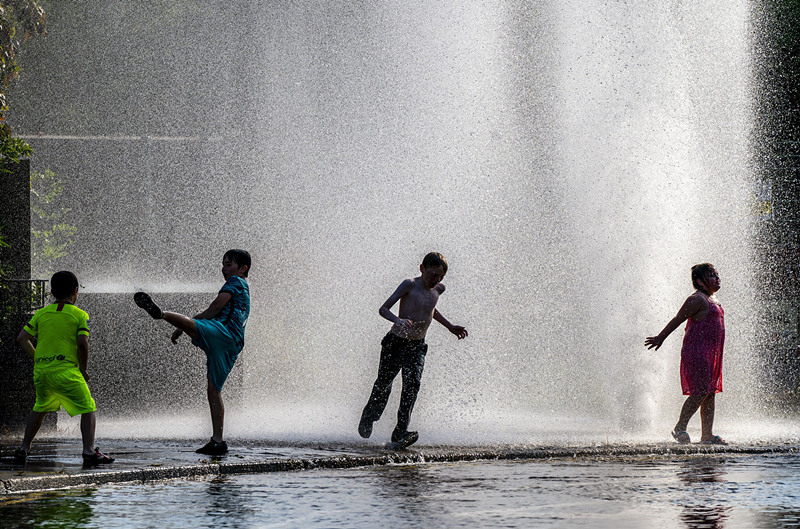 Children play in a burst water main on Harstbourne Avenue in Belle Vale, Liverpool on one of the hottest days of the year, Monday July 19, 2021. (Photo: CFP)

Issued Monday afternoon, the amber warning will last until mid-night Thursday with temperatures expected to drop on Friday.

The warning has been applied to South Wales, West Midlands, southwest England and further east into Hampshire as far as the Isle of Wight.

The BBC weather report said parts of Britain could reach 33 degrees Celsius later this week, hotter than some of Europe's top holiday destinations including Tenerife, an island of Spain's Canary Islands.

Public Health England (PHE) has also issued a heat-health alert, advising people to stay out of the sun, drink plenty of fluids and avoid excess alcohol and physical exertion during the hottest parts of the day.

It also warned that some heat-sensitive systems and equipment may fail, leading to power cuts.

The Met Office launched its new extreme heat warning system this June to highlight potential widespread disruption and adverse health effects. Amber is the second-highest level in the system, behind the top level red.

It came as the PHE recorded 2,256 excess all-cause deaths in England during the three periods officially classed as "heatwaves" last summer -- the highest number since its records began in 2004.