MADRID, Sept. 12 (Xinhua) -- Heavy rains in high winds are currently affecting the south and east of Spain, where a couple aged 70 have died from the bad weather. 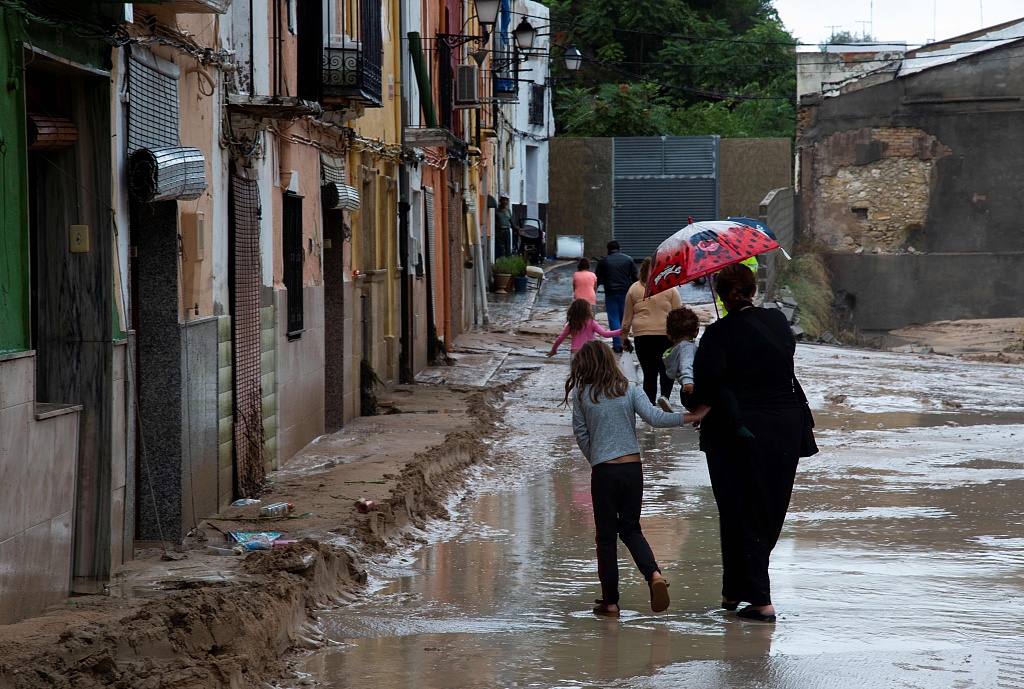 People walk on a flooded street in Ontinyent on September 12, 2019 as torrential rains hit southeastern Spain overnight, sparking major flooding in the Valencia region and closing schools in a move affecting a quarter of a million children. (Photo: VCG)

Emergency services in the Autonomous Community of Castilla-La Mancha reported on Thursday that the two victims were discovered in their car, which had been swept off a road in the province of Albacete.

So far, the couple are the only deaths confirmed in the current bad weather, which is known as the "cold drop" (gota fria). This is a seasonal phenomenon which happens in late summer and early autumn when cold air from the north meets with warm air rising off the Mediterranean Sea off the east and southeast of Spain.

The "cold drop" began on Monday, provoking widespread flooding in the Balearic Islands, triggering a red alert for extreme weather by the Spanish Meteorological Agency (AEMET).

The phenomenon has now moved to mainland Spain with red alerts issued for the regions of Almeria, Alicante, Valencia and Murcia, where AEMET predicts total rainfall of over 200 milliliters per cubic meter.

Rainfall of 270 milliliters was measured in the town of Ontinyent to the south of Valencia, where cars were swept away and a school wall collapsed as the River Clariano overflowed, flooding nearby houses.

The wall of a sports hall was blown down by a tornado in the town of Denia, close to Alicante, where over 80 municipalities closed schools affecting over 250,000 students.

"These storms will be among the worst in the last 13 years for their torrential intensity, persistence, the presence of very strong winds of 80, 90 and even 100 kilometers per hour, because there could be hail more than 2 cms big and there is the possibility of waterspouts and tornadoes in the Levante," AEMET spokesperson Ruben del Campo said in declarations published in the "El Pais" newspaper.