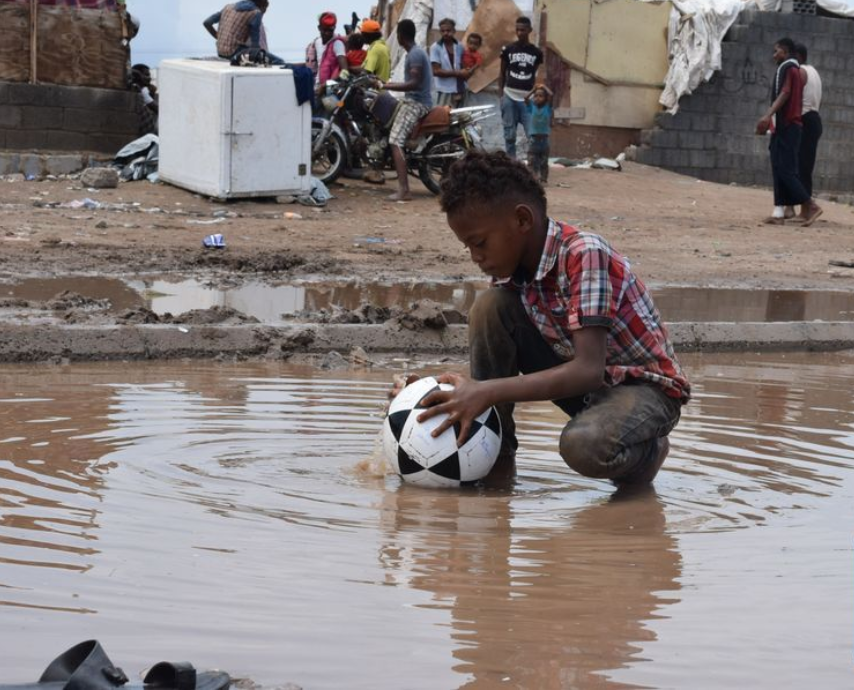 A child washes his ball with rain water near his displacement camp on outskirts of Aden, on June 9, 2019. (Photo: Xinhua)

In the southern port city of Aden, many houses have been submerged because of the heavy floods that continued for several hours amid warnings of continuing weather disturbance.

Thousands of the internally displaced Yemenis based on Aden's outskirts captured the lion's share of the heavy rains that wreaked havoc in their makeshift dwelling places.

Taha Qudeemy, a father of four children displaced from the Red Sea port city of Hodeidah, told Xinhua that the heavy rains that were accompanied by high winds turned their nights into a nightmare.

"My children and I spent a sleepless night yesterday because our uncovered tent was full of water under the heavy rains," Qudeemy said.

"Like many other displaced people, we were forced to remain standing throughout yesterday's night without sleeping till this moment," he said.

He urged the local and international humanitarian organization operating in the war-torn Arab country to help the displaced people to overcome the recent circumstances caused by the heavy rains.

Many other displaced people uprooted from their homes by the ongoing military conflict raging between the Yemeni government forces and the Houthi rebels are passing through their most difficult times amid continuing weather disturbance.

Yemen's National Meteorological Center warned of "continuing turbulent weather," explaining in its daily bulletin that heavy rains with high winds may continue to hit the southern coast and the adjacent areas.

The center warned that the Yemeni citizens should "take the necessary precautions from the flow of floods, low visibility and sea waves disturbance."

Saeed Ali, one of the displaced people, told Xinhua that there's no option for them to confront the heavy rains' effects that struck their tents.

"Many families left their houses after war escalation in Hodeidah's outskirts, seeking for a safe life for their children here in the liberated areas," Saeed said.

"But unfortunately, we found no safety here and left in uncovered tents under the heavy rains and high winds," he added.

Earlier in the day, Yemeni Prime Minister Maeen Abdulmalik ordered the local authorities to immediately deal with the damage and consequences caused by the heavy rains and flood flows in Aden province.

The state-run Saba News Agency reported that Abdulmalik urged more efforts to "mitigate the repercussions and damage of heavy rainfall in Aden."

Meanwhile, Yemeni Minister of Local Administration and Chairman of the Higher Relief Committee Abdul-Raqib Fath called for the international humanitarian organizations operating in Yemen to provide urgent assistance for people affected by the heavy rains.

As a result of the heavy rains, the risk of waterborne diseases such as cholera and diarrhea become the more disturbing matter for the displaced people in Yemen.

She feared that the outbreak of diarrhea and malaria might affect the displaced children living in the temporary camps in Aden and elsewhere.

Yemen has been locked in a civil war since the Shiite Houthi rebels overran much of the country militarily and seized all northern provinces, including the capital Sanaa, in 2014.

Saudi Arabia has been leading an Arab military coalition that intervened in Yemen's conflict in 2015 to support the government of President Abd-Rabbu Mansour Hadi after Houthi rebels forced him into exile.

The prolonged military conflict has aggravated the suffering of Yemenis and deepened the world's worst humanitarian crisis.