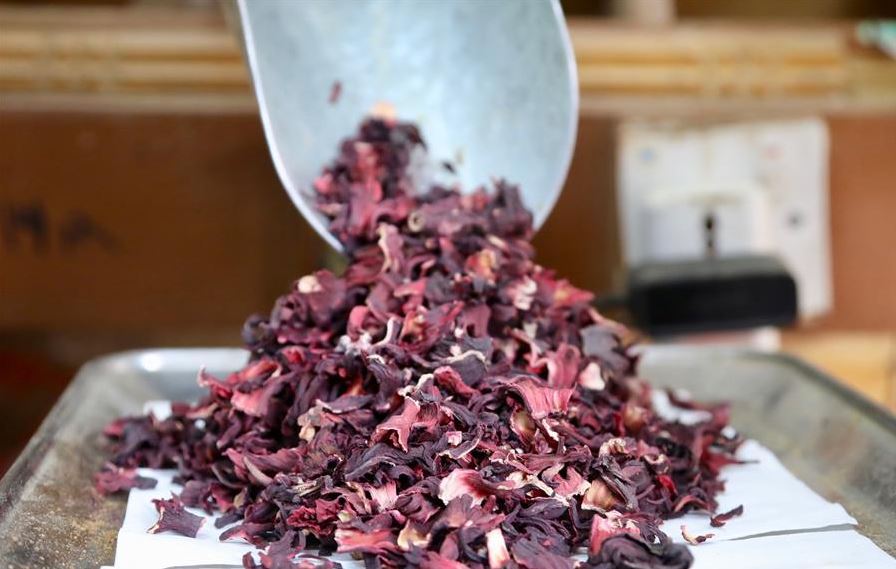 BAGHDAD, Oct. 11 (Xinhua) -- The historical use of herbal medicine, also known as Arab medicine in Iraq, has thrived in the past few decades due to unrest in the war-torn country.

In Iraq, using herbs in medicine dates back over 5,000 years to the Sumerians, who created clay tablets with lists of hundreds of medicinal plants such as Myrrh, which is a natural gum extracted from small and thorny trees.

For centuries, the traditional Arab medicine was the backbone of treating illnesses, but at the beginning of the 20th century, the modern chemical medicine dominated, leaving Arab medicine the second choice for people.

The traditional herbal markets nowadays are located in old districts of Shorjah, Souq al-Arabi, Shawaka and Kadhmiyah in Baghdad, but the increase of demand for such treatments pushed people to open dozens of herbs shops all over the city.

The herbal treatment is widely wanted by many Iraqis as it proved its success in treating illnesses with fewer side effects, in addition to its low cost comparing with the chemical treatment.

Abu Azhar, in his 60s, owner of a herbs shop in western Baghdad, told Xinhua that people increasingly used the herbal treatment during the years of the international sanctions in 1990s and after 2003 U.S.-led invasion of Iraq.

Sitting in his shop surrounded by many bottles and cans containing various herbs, Azhar said that "the most common herb in my shop is Chamomile as it treats diabetes, reduces inflammation, cold symptoms and helps with sleep."

"The most important thing is that the use of herbs does not harm the human body contrary to the chemical drugs ... in addition to the high price, especially as Iraqis are living in difficult situations," he added.

"The cost of buying herbs that treat various diseases, including diabetes, colitis, hypertension, heart disease and other diseases, is much lower than drugs sold in pharmacies and also saves money paid to physicians," he said.

Omer al-Khalidi, 44, said that he inherited the herbs treatment profession from his late father who was well-known in Mosul in northern Iraq, but moved to Baghdad 25 years ago.

"The herbs world has secrets and magical recipes," said Khalidi. "The Black Cumin and pure honey are common ingredients for preparation of most herbal remedy recipes. They are indispensable material to achieve positive results."

"Any comparison would show that the chemical medicine costs 10 times higher than herbal medicine, let alone the side effects of the chemicals," Khalidi added.

Khalidi pointed out that he is planning to hand over his profession to his 18-year-old son.

"I always bring him here in the shop to be familiar with the herbs world. I regularly teach him the inherited knowledge about herbs, and sometimes I ask to him do some researches on new kinds of herbs to improve himself," Khalidi said.

Abu al-Hassan, in his 60s, a customer at a herbs shop in Ghazi market in Baghdad's western neighborhood of Mansour, told Xinhua he used to buy the green tea and other herbs from that shop.

"I usually prefer the green tea for its positive effect on the human body like reducing the risks of heart disease, lower blood pressure, cholesterol level, and improving memory," said Hassan, who believes that the people in southeastern Asia enjoy better health because their food depends more on herbs.

Hussein Fawzi, in his 50s, a physician told Xinhua that such kind of medicine dates back to ancient times, and maybe many medicines lack appropriate scientific testing.

"I think, given the level of local knowledge, it was a good idea that the Iraqi Health Ministry created an institution to offer specialized courses in herbal medicine," Fawzi said.

The widespread herbs shops in Iraq, pushed the health ministry to organize herbal treatment profession by establishing an institute named Herbal Center of Iraq (HCI), which is tasked with teaching and certifying the people who works in this area.

The ministry issued regulations including tasking the HCI with nine-month courses to license those who want to practice herbal treatment.