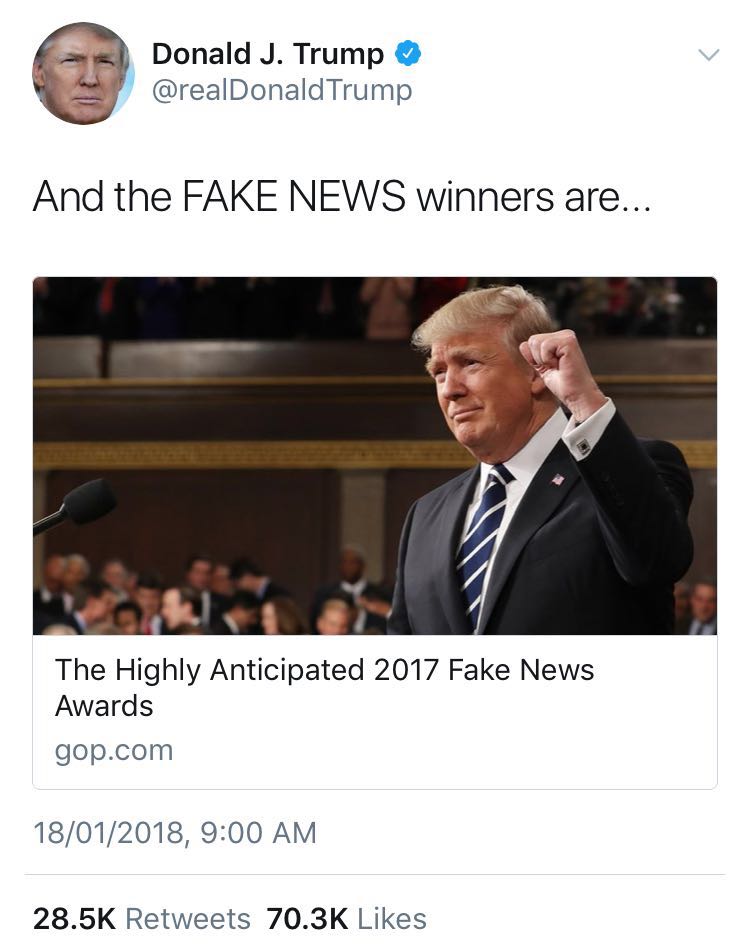 The U.S. Republican Party announced 11 inaccurate news reports on U.S. President Donald Trump on its website Wednesday, with most U.S. main stream media being included in the list."2017 was a year of unrelenting bias, unfair news coverage, and even downright fake news," the website wrote as it rolled out what it called the "winners of the 2017 fake news awards," adding that studies have shown over 90 percent of the media's coverage of President Trump is negative.Of the 11 pieces of news stories, reports from TV broadcaster CNN snatched four spots, leaving the rest to TV broadcaster ABC, Time Magazine, The Washington Post, The New York Times and Newsweek Magazine, which were named once each and twice for The New York Times."Russian collusion" was named as collective fake news without attributing to any specific outlet.Included in the list were a NYT's story that claimed the U.S. economy would never recover from a Trump presidency; a Washington Post's story suggesting a Trump rally had been empty and a CNN story claiming that former White House Communications Director Anthony Scaramucci has had improper ties with Russian.Most of the fake news included have been retracted or rebutted by other media outlets. In some cases, the reporters responsible for the stories were demoted or fired.The website also listed 10 major accomplishments the Trump administration has achieved in its first year, including creating jobs and cutting unemployment rate.The much anticipated fake news awards capped a year of tense relationship between Trump and the media.

Trump has often taken to twitter to complain that U.S. media has been unfairly negative about his administration, while the media has denied such allegations.Also on Wednesday, The New York Times' editorial board issued a note acknowledging that it had been "sharply critical of the Trump presidency on grounds of policy and personal conduct."The note said that not all of its readers share its position, and it will start publishing letters from Trump supporters to have their voice heard.The move has attracted an influx of letters from Trump supporters, many of whom expressed dismay that major news outlets have been biased in their reporting."I think President Trump is doing just fine, particularly when one considers the sustained assault of the media, Hollywood, talk shows ...which has abandoned all pretense of objectivity," one reader wrote.The sense of distrust between ordinary Americans, the government and the media was supported by a Gallup poll released on Wednesday.45 percent of those polled said there is "great deal" of political bias in news coverage, up from 25 percent in 1989 and 37 percent in 2012.In addition, 68 percent of those polled said the media is not doing a good job separating facts from opinion, up from 42 percent registered in 1984.When asked to name an objective news source, only 44 percent produced one, while 51 percent said they couldn't.Jeffrey Jones, a participating researcher, said the "troubling" result can help explain the declining trust in media in recent decades."Americans still widely believe that the media have a critical role to play in supporting U.S. democracy," Jones said.