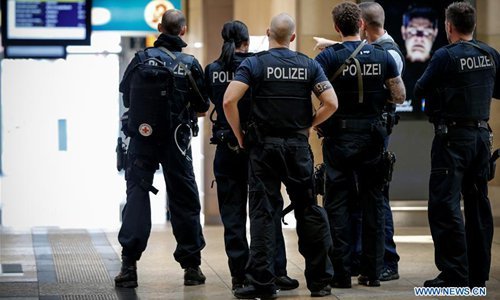 Police stand at Cologne Central railway station on October 15, 2018 in Cologne, Germany. The German police ended a hostage-taking in Cologne Central Station on Monday and freed a woman from the violence after hours of tension. (Photo: Xinhua)

German police have arrested a Russian scientist working at a German university, accusing him of spying for Moscow, prosecutors said on Monday, in a case that risks further inflaming bilateral tensions.

Federal prosecutors said in a statement that the suspect, identified only as Ilnur N., had been taken into custody on Friday on suspicion of "working for a Russian secret service since early October 2020 at the latest."

Ilnur N. was employed as a research assistant at a natural sciences and technology department at the unnamed German university, prosecutors said.

A spokeswoman from the University of Augsburg confirmed media reports to AFP that the suspect had been working there and that his workplace had been searched in the course of his arrest.

She declined to provide further details.

German investigators believe the suspect met at least three times with a member of Russian intelligence between October 2020 and in June. On two occasions he allegedly "passed on information from the university's domain."

He is suspected of accepting cash in exchange for his services.

The suspect appeared before a judge on Saturday who remanded him in custody.

Mass-selling newspaper Bild identified the suspect as Ilnur Nagaev. His profile was not visible on the website of the University of Augsburg. But an unconfirmed account in his name on LinkedIn indicated that he worked as a research engineer at Russia's Baikov Institute of Metallurgy in 2013 before moving to Germany in 2016 for an internship at Augsburg's Fraunhofer institute for lightweight construction.

Neither the German nor the Russian government made any immediate comment on the case.

Moscow is at loggerheads with a number of Western capitals after a Russian troop build-up on Ukraine's borders and a series of espionage scandals that have resulted in diplomatic expulsions.

Italy in June said it had created a national cybersecurity agency following warnings by Prime Minister Mario Draghi that Europe needs to protect itself from Russian "interference." The move came after an Italian navy captain was caught red-handed by police while selling confidential military documents from his computer to a Russian embassy official.

The leaders of nine eastern European nations in May condemned what they termed Russian "aggressive acts" citing operations in Ukraine and "sabotage" allegedly targeted at the Czech Republic.

Several European countries have expelled Russian diplomats in solidarity with Prague but Russia has branded accusations of its involvement as "absurd" and responded with tit-for-tat expulsions.