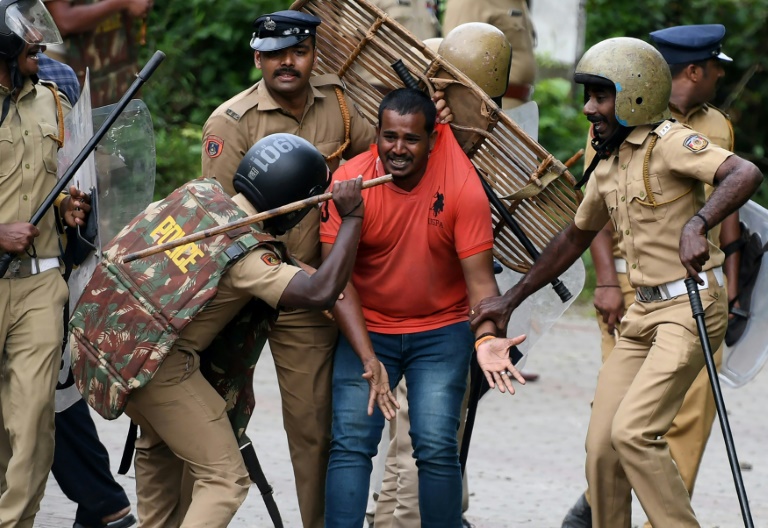 Indian police beat a Hindu activist in protests over women's acccess to a temple in Kerala (Photo: AFP)

Hindu hardliners blocked intersections, threatened drivers, threw stones at buses and ordered a 12-hour strike on Thursday to successfully bar women from one of India's holiest temples for a second day.

The Lord Ayyappa temple at Sabarimala in the southern state of Kerala was meant to allow women of all ages -- and not just those under 10 and over 50 as before -- from Wednesday following an order by India's highest court last month.

But hundreds of traditionalists, throwing stones at baton-wielding police, defied the order -- blocking the path, surrounding and shouting at any woman attempting to make it to the hilltop site.

Angry young men also surrounded and smashed the car windows of female television reporters and threatened others, including an AFP reporter. Another female correspondent was kicked.

Local Hindu groups had previously declared a 12-hour shutdown of local businesses, telling drivers that their vehicles would be attacked if they took anyone towards the temple.

"Some men came to the parking lot early Thursday and warned taxi drivers against defying the shutdown call," taxi driver Praveen, in the town of Pathanamthitta, told AFP.

"They warned drivers at several nearby parking lots and hotels. Anyone who defies it will be risking damage to his vehicle," he added in an account corroborated by other drivers.

"No one will get to the temple today because all the drivers are scared for the safety of their cars," one hotel receptionist told AFP. Shops, businesses and schools in the area were shut.

State authorities insisted that they would ensure access, imposing restrictions on public gatherings of more than five people, and laying on buses for devotees.

Kerala police, who had 1,450 officers on duty, many with helmets and body armour over their khaki uniforms, provided escorts to some buses.

Police also patrolled through the night and reinforced their presence at Nilackal, the base camp below the temple.

But groups of between 50 and 100 young men gathered at intersections on Thursday, checking vehicles.

"Traditions that have existed since before courts cannot be tampered with," Krishna Kumar, a tall muscular man in his 20s at one crossroads in the town of Kozhencherry, told AFP.

In some areas, protesters threw stones at the buses.

The situation at the actual temple was festive, meanwhile, with thousands of people queueing to enter as music played, after trekking for several hours up the steep hill through lush, monkey-filled forest.

But despite the Supreme Court's order to allow them in, none of the few women present on Thursday were between 10 and 50 years old -- of menstrual age, as the court put it.

The restriction reflects an old but still prevalent belief that menstruating women are impure, and the fact that the deity Ayyappa was reputed to have been celibate.

"Everyone is angry and I don't have to hide it. What the Supreme Court has done isn't right. We don't want any change. Our Ayyappa's traditions don't need to be tampered with," shirtless devotee Sundaravadana told AFP, clutching a "Save Sabarimala" placard.

"We've come here since our childhood and understand the rich tradition behind it. Women are allowed everywhere, at all other temples. It doesn't happen here for a reason. We will do whatever to save our Sabrimala," he added.

Female devotees are still barred from some Hindu temples in India. The entry of women at Sabarimala was long taboo, with a ban formalised by the Kerala High Court in 1991.

Pinarayi Vijayan, the Marxist chief minister of Kerala, said that the mobs were backed by the Rashtriya Swayamsevak Sangh (RSS), a hardline Hindu group close to Modi's BJP.

"These attackers are motivated by casteist and feudal ideologies... All believers must condemn this attack on Sabarimala," Vijayan tweeted.

The head of the BJP in Kerala, P.S Sreedharan Pillai, told AFP on Wednesday that his party advocated "peaceful protest against the court verdict."

"The overwhelming majority of women oppose the Supreme Court ruling," he added.

Trupti Desai, an activist, said she had decided to postpone her visit.

"If I go there will be more violence. The government had enough time to prepare the ground for implementing the court's verdict but they have failed to provide protection to the women devotees," she told AFP by phone.