As New York's lieutenant governor, Kathy Hochul has spent years on the road as the friendly face of the administration, visiting the far-flung coffee shops and factory floors of each of the state's 62 counties for countless ribbon-cutting ceremonies and civic cheerleading events. 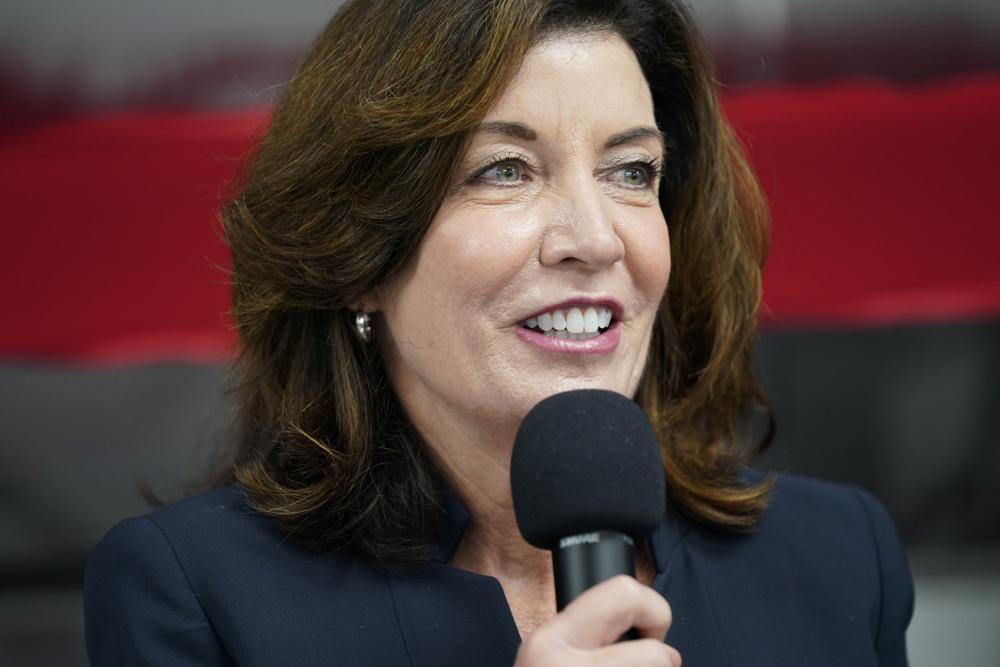 Now, with Gov. Andrew Cuomo facing possible impeachment over sexual harassment allegations, her next stop may be the state Capitol of Albany.

Hochul would become the state's first woman governor if Cuomo were removed from office.

A centrist Democrat from western New York, she has worked deep in Cuomo's shadow for her two terms in office, but this week joined the chorus of politicians denouncing the governor after an independent investigation concluded he had sexually harassed 11 women while in office.

She also acknowledged what has been simmering for months: The possibility she will become governor.

"Because lieutenant governors stand next in the line of succession, it would not be appropriate to comment further on the process at this moment," she wrote.

To many New Yorkers, Hochul is an unknown quantity, serving since 2015 in a job that is mostly ceremonial. A typical afternoon in late July had her announcing job training funding in Utica, discussing manufacturing in Rome and touring downtown Cazenovia with the small town's mayor.

That has been nothing like the attention-demanding appearances of the determinedly high-profile Cuomo, who does most of his business in Albany and New York City and whose daily coronavirus briefings were national events at the height of the coronavirus.

Hochul has not been part of Cuomo's inner circle of aides and allies. Her name wasn't mentioned in the investigative report, released by Attorney General Letitia James, that detailed not only the harassment allegations against Cuomo but also efforts by his staff to discredit some of his accusers.

But at 62, Hochul is an experienced politician, a veteran of 11 campaigns that have taken her from town board to Congress, the latter representing a conservative western New York district after a surprising 2011 win in a special election to fill a vacancy in the U.S. House.

"Pragmatic would be a good way to describe her," said Jacob Neiheisel, an associate political science professor at the University at Buffalo. "Someone who is pretty good at reading the tea leaves and coming around to where her constituency is."

A steelworker's daughter, Hochul, a lawyer, worked in Washington as an aide to former U.S. Rep. John LaFalce and later, Sen. Daniel Patrick Moynihan, both from New York, before holding her first public office, on the town board in Hamburg, near Buffalo.

From there, she became Erie County Clerk, where she made some news in 2007 for resistance to a plan by then-Gov. Eliot Spitzer to allow unauthorized immigrants get driver's licenses. Hochul and another western New York clerk explored a plan to have police arrest immigrants who tried to apply.

"It will be a deterrent, and that's what I'm looking for," Hochul told The Buffalo News at the time.

Her next move was to Congress, where in 2011 she had a surprising win in a special election in a district that had been in Republican hands for decades. She lost a bid for reelection a year later to Republican Chris Collins, despite an endorsement by the National Rifle Association. Collins later resigned from the U.S. House and pleaded guilty to insider trading.

Hochul moved to the left, politically, when Cuomo tapped her as his running mate in 2014 after his first lieutenant governor, former Rochester Mayor Robert Duffy, decided not to run for reelection.

She backed New York's SAFE Act, one of the nation's toughest gun control laws, as well as the state's Green Light Law, which let unauthorized immigrants get driver's licenses.

Hochul has not publicly expressed whether she would pursue a full term in 2022 if she were to step into the role.

An upstate candidate running for any statewide office in New York faces a daunting challenge, but even more so for the governor's office, which has historically drawn from New York City.

Neiheisel said given her record, it is difficult to predict what a "distinctly Hochul agenda" might look like, especially when faced with the state's still-active pandemic response and a recovery that will involve billions of dollars in federal aid.

"Given how little she's historically been in the news cycle, I really don't think she has the kind of name recognition that you would expect of somebody who is suddenly being thrust into a position of maybe being governor," Neiheisel said "She's going to have to do an awful lot, really fast, in order for there to be a serious conversation for keeping that job."

At a news briefing Wednesday, New York City Mayor Bill de Blasio, who has a famously contentious relationship with Cuomo, said he's gotten to know Hochul over the last few years and "she strikes me as a very reasonable person."

"I believe if Kathy Hochul becomes governor, she'll be an honest broker," he said. "We'll be able to work together."

In Buffalo, Erie County Executive Mark Poloncarz worked alongside Hochul when he was county comptroller and she was Erie County Clerk. He said he saw Hochul easily stepping into the governor's office.

"I think it's fair to say that if that did happen, we certainly would have a friend in Albany," he said.