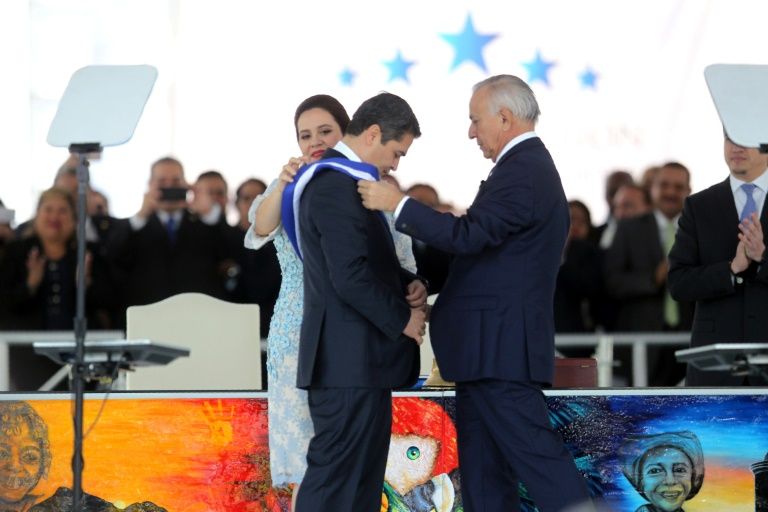 Juan Orlando Hernandez stood for re-election despite a constitutional ban on presidents serving more than one term, January 27, 2018. Photo: AFP

Juan Orlando Hernandez was sworn in as president of Honduras for a second term Saturday amid protests that he fraudulently won the November election.

Hernandez took the oath at a special session of Congress at the National Stadium, with the bleachers packed with his supporters.

At the event, in which he vowed to "comply with and enforce the Constitution and law," the 49-year-old Hernandez said he was "committed to developing a process of reconciliation among all Hondurans."

Hernandez takes over as president of the impoverished Central American country of nine million with diminished legitimacy due to the controversial election.

Supporters of defeated opposition candidate Salvador Nasralla accuse him of setting up a "military dictatorship," and insist that the election was stolen.

Hernandez stood for re-election against Nasralla despite a constitutional ban on presidents serving more than one term.

He narrowly won after a three-week stretch of often-interrupted ballot counting that stoked tensions and sparked accusations of fraud.

The leftist opposition staged protests that shook the country throughout the week, culminating in a mass rally in Tegucigalpa late Friday.

On Saturday, however, protesters could get only within 500 meters of the inauguration event.

The stadium was protected by several rings soldiers and police, who were pressed into duty from around the country.

In the capital's Miraflores neighborhood, protesters hurled rocks at a bus full of Hernandez supporters.

"The protests do not end today, this will be permanent," Nasralla told reporters, as he called for new elections.

Dozens of people have been killed and hundreds jailed since Hernandez was declared the winner of the November 26 run-off election.

"This is a government that has the seals of the state but has no legitimacy," said rights activist Berta Oliva.

"It imposes its authority in a savage way with soldiers in the street," she told AFP, describing the new government as a "dictatorship."

Late Friday Nasralla led a convoy of hundreds of honking vehicles carrying his flag-waving supporters through the streets of Tegucigalpa.

"I hope that the international community finally starts to realize and that sooner than later, within the next weeks, it will force the dictator to step down," Nasralla said during the demonstration.

We came to tell Hernandez "that we don't recognize him as our president," said one demonstrator, identifying herself only as Silvany.

Political scientist Juan Ramon Medrano has said that the Honduran government "is showing signs of dictatorship."

"In Honduras there is a political crisis" that the United States and the Organization of American States regional bloc "do not measure with the same yardstick as they measure Venezuela," he said.

Washington and the OAS have been highly critical of Venezuela's leftist regime.

"Still, Hernandez will begin his second term in a much weaker position given the social component, with his legitimacy in question," it said in a note ahead of the inauguration.

The OAS had proposed holding new elections after its observer mission expressed doubts about the outcome.

However it recently said it intends to "work in the future with the elected authorities of Honduras."

Hernandez has implicit backing from the United States, which is pouring millions of dollars into Honduras and neighboring Guatemala and El Salvador to help improve security.

The three countries, collectively known as Central America's "Northern Triangle," are a significant source of undocumented migrants heading to the United States, and are also key in the fight against drug trafficking.