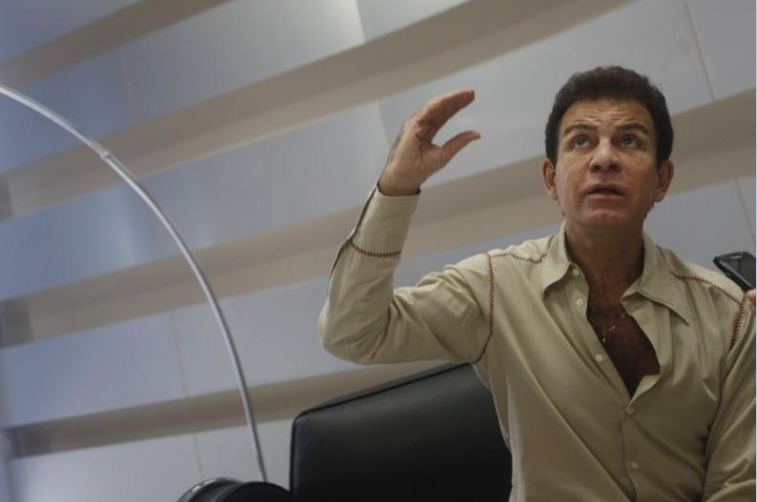 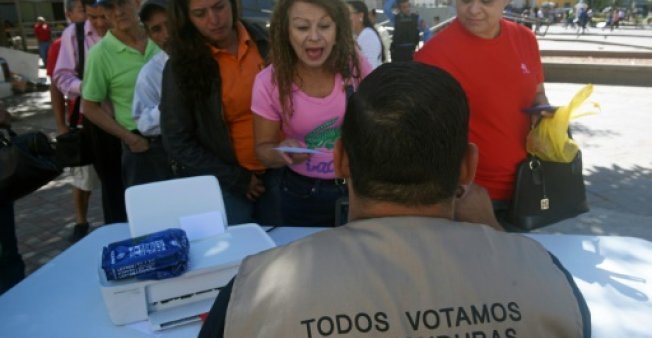 Hondurans went to the polls Sunday with President Juan Orlando Hernandez seeking a second mandate despite a constitutional one-term limit, sparking fears that his bid could usher a crisis in the poverty and crime-wracked country.

An estimated six million people are eligible to vote, electing not just a president but also members of Congress, mayors and members of the Central American parliament.

"We hope this will be a civic celebration," said David Matamoros, head of the Supreme Electoral Tribunal, in declaring the polls open.

Hernandez's conservative National Party -- which controls the executive, legislative and judicial branches of government -- contends that a 2015 Supreme Court ruling allows his re-election.

The opposition, though, has denounced his bid, saying the court does not have the power to overrule the 1982 constitution.

This small country, in the heart of the "Northern Triangle" of Central America where gangs and poverty reign, has one of the highest murder rates in the world, though that metric has fallen under Hernandez's last four years in office.

What credit he claims from that progress is counterbalanced by tensions from a 2009 coup.

That year, then-president Manuel Zelaya was deposed by the armed forces, with backing from the right and from powerful businessmen, for nudging closer to Venezuela's Hugo Chavez.

Zelaya was notably accused of wanting to change the constitution to vie for a second term.

'Between dictatorship and democracy'

Hernandez, 49, who came to power in 2013, is seen as the frontrunner going into Sunday's election, out of a field of nine candidates.

His closest rivals are Salvador Nasralla, a 64-year-old TV anchor-turned-politician who represents the leftwing Opposition Alliance Against the Dictatorship coalition, and Luis Zelaya (not related to Manuel Zelaya), 50, who is the candidate of the right-leaning Liberal Party.

The streets of the capital, Tegucigalpa, were festooned with the main parties' colors on the weekend, and campaign booths were dotted around to inform voters on the ballots.

But some analysts warned the calm was deceptive, and tensions could boil over because of the president's desire to hold on to power.

"For the first time, it's not a race between conservatives and liberals, but between a dictatorship and democracy," said Victor Meza, a political analyst at the Honduras Documentation Center.

Alexander Main, an analyst at the US-based Center for Economic and Policy Research, questioned Honduras' law-and-order achievements in an opinion piece written for The Hill, an online political news outlet.

"Honduras remains among the most dangerous countries for those who dare to challenge power," he said. "In the years since the coup, hundreds of activists have been murdered while police and judicial authorities have largely failed to take action."

Hernandez's top principal rivals in the race accuse the electoral board of preparing poll fraud to declare the incumbent president the victor. The Supreme Electoral Tribunal denies that.

"I hope you won't get discouraged when false information starts going around. We need to stay vigilant," Nasralla told his supporters on Friday.

One of the judges on the electoral tribunal, Marco Ramiro Lobo, told AFP that "our obligation is to guarantee a transparent electoral process which has verification mechanisms."

But Marvin Barahona, a political science researcher, said the elections posed the risk of a "new crisis" because of the Supreme Court decision opening the way for Hernandez's bid.

Apart from the presidential election, Sunday balloting will also be to decide the country's three vice-presidency posts, the 128-seat congress, 20 representatives in the Central American Parliament, and the mayors of 298 municipalities.

Initial results were expected around two hours after polling closes, which is scheduled at 4:00 pm (PST) but can be extended by an hour.