WORLD Honor the history for a better future: Chinese, Russian ambassadors to US

Honor the history for a better future: Chinese, Russian ambassadors to US 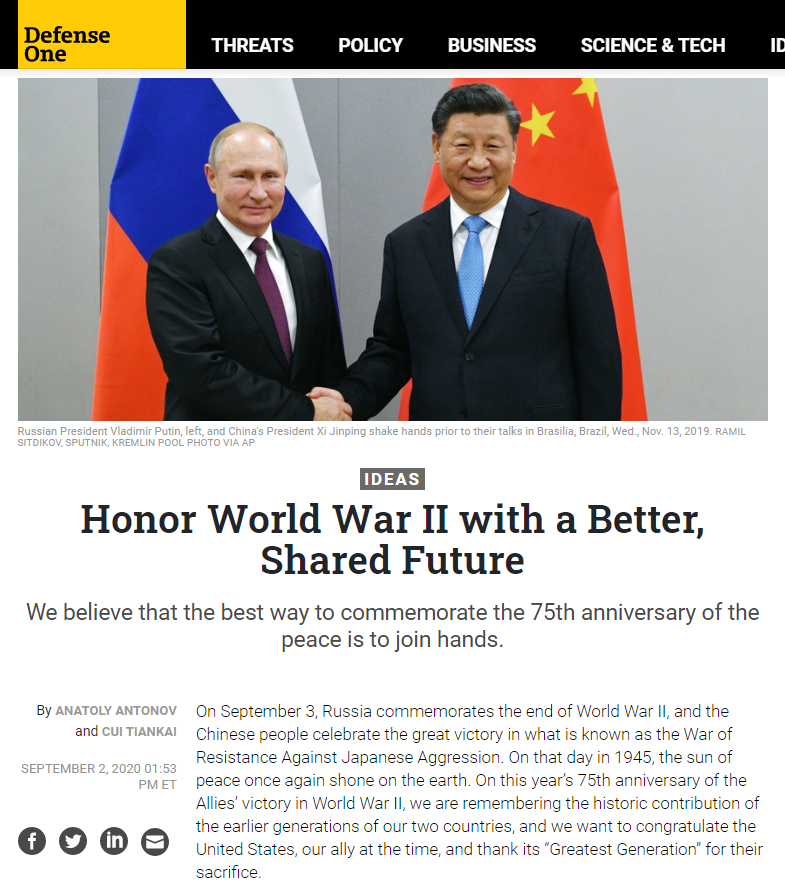 (File photo: Chinese Embassy in the US)

Washington (People’s Daily) – On September 2, an article titled “Honor World War II with a Better Shared Future” co-authored by Chinese Ambassador Cui Tiankai and Russian Ambassador Anatoly Antonov was published by Defense One, to commemorate the 75th anniversary of the victory of the Chinese People's War of Resistance Against Japanese Aggression and the World Anti-Fascist War. The ambassadors of China and Russia to the US emphasized the best way to commemorate the war is to avoid a repeat of the tragedy and join hands to open up a better future.

In the article, they pointed out that on September 3, Russia commemorates the end of World War II, and the Chinese people celebrate the great victory in the War of Resistance Against Japanese Aggression. On the 75th anniversary of the victory of the Allies in World War II, the two countries are remembering the historic contribution of the earlier generations. In the meanwhile, people want to congratulate their allies at the time, the representatives of the American “Greatest Generation”, and thank them for their self-sacrifice.

They said that the friendship developed between the Russian and Chinese people in World War II represents an inexhaustible driving force for Russia-China relations and would last throughout the ages. It has become a tradition for the two countries to jointly commemorate the War.

Cui and Antonov reiterated that at the historic moment of the 75th anniversary of the victory of the World Anti-Fascist War, this joint article is a continuation of the fine tradition of Russia and China to jointly commemorate the victory and an implementation of the important consensus between Russian and Chinese leaders. “History is a mirror to the future. Honoring history, we aim to create a better future,” they said..

The ambassadors of China and Russia to the US emphasized that history should not be distorted and lessons from history must be learned. Those who adopt the high-handed approach of using force will find that they are only lifting a rock to drop on their own feet. “We should give up the thinking of the zero-sum game, strive for win-win cooperation and realize the vision of a community with a shared future for mankind.” They said this is the only right choice if the world is to turn the idea"to save succeeding generations from the scourge of war, which twice in our lifetime has brought untold sorrow to mankind", as enshrined in the UN Charter into reality.

They reiterated that as a historical achievement of the World Anti-Fascist War, the international order and system with the purposes and principles of the UN Charter as the core must be maintained. Seventy-five years on, we still have the obligation to maintain and develop this order and system that has made great contributions to world peace, security and stability. The basic norms of international relations, such as the inviolability of sovereignty and territorial integrity of all countries and non-interference into their internal affairs, should be respected. And multilateralism should be put into practice.

They pointed out that the spirit of the World Anti-Fascist War characterized by concerted efforts, unity and mutual assistance should be carried forward. In the face of global threats and challenges such as climate change, terrorism, economic recession and pandemics, the winning nations of World War II, especially the permanent members of the UN Security Council, based on their shared memory of fighting side by side, should ponder on their special responsibilities, strengthen mutual trust and cooperation, and follow the principles of mutual respect, equality, peaceful development and common prosperity. This is urgently relevant in the context of the raging COVID-19 pandemic.

“Russia and China have made the right choices. We will stay committed to our comprehensive strategic partnership of coordination, push forward cooperation as good neighbors and friends, promote global stability and security, and contribute to the prosperity and wellbeing of all countries. We believe that the best way to commemorate the war is to avoid a repeat of the tragedy and join hands to open up a better future,” said Cui and Antonov.