Hope abundant as deaths slow down 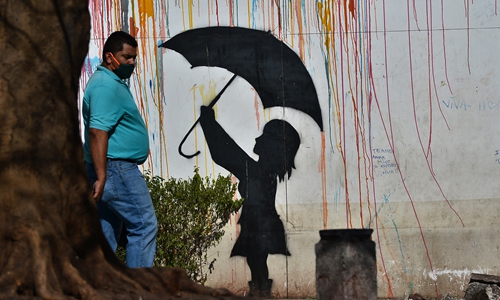 A man walks wearing a face mask in Tegucigalpa, Honduras on Sunday during the curfew ordered by the Honduran government to help curb the spread of the novel coronavirus. Honduras has reported 393 cases of people infected with COVID-19, of which 25 have died, so far. (Photo: AFP)

The death toll from the coronavirus pandemic has slowed in some of the worst-hit countries, with Spain readying Monday to reopen parts of its economy as governments grapple with a once-in-a-century recession.

Italy, France and the US have all seen a drop in COVID-19 deaths in the past 24 hours, with Italy - the European nation most afflicted - reporting its lowest toll in more than three weeks.

It came as Pope Francis delivered an unprecedented livestream message to a world under lockdown on Easter Sunday, and Britain's Boris Johnson left hospital, thanking medics for saving his life.

More than half of the planet's population is staying home as part of efforts to stem the spread of the virus, overwhelming healthcare systems and crippling the world economy.

Spain's death toll has fallen in recent days, but as a small bump in deaths was reported on Sunday, Prime Minister Pedro Sanchez warned that the locked-down country was "far from victory."

In the US - now the world's worst-hit nation with a fifth of all deaths and more than half a million confirmed cases - the government's top infectious disease expert added to cautious optimism that the coronavirus pandemic may have reached its peak.

"We are hoping by the end of the month we can look around and say, OK, is there any element here that we can safely and cautiously start pulling back on?" Fauci told CNN.

In Britain, which has logged more than 10,000 deaths, Prime Minister Boris Johnson said on Sunday he had been discharged after "a week in which the NHS has saved my life, no question," referring to the country's state-run National Health Service.

Britain is now seeing daily death tolls matching those previously seen in Italy and Spain, after recording nearly 1,000 fatalities on both Friday and Saturday. There were 737 new deaths reported Sunday.

In Mumbai's crowded Dharavi slum - one of Asia's biggest and the inspiration for the 2008 Oscar-winning film "Slumdog Millionaire" - more than 43 cases have been confirmed.

While sub-Saharan Africa has not been as badly hit by the coronavirus pandemic as some other parts of the world, the economy is being pummeled.

Governments are under pressure to keep populations safe while preventing economic collapse, amid warnings of a downturn not seen since the Great Depression.

But the World Health Organization has warned countries against lifting lockdown restrictions too early.