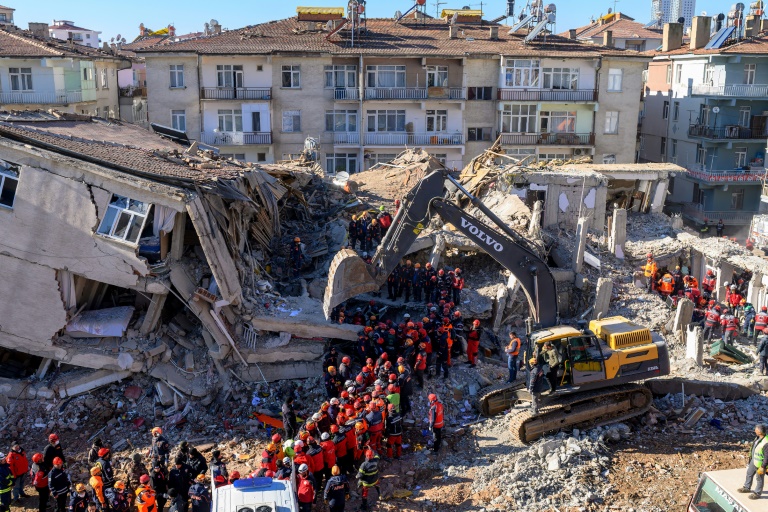 Hopes faded Sunday of finding more survivors from a powerful earthquake in eastern Turkey as more bodies were pulled from the rubble and the death toll climbed to 36.

Nearly 4,000 rescue workers combed through debris in freezing temperatures, helped by mechanical diggers, in vain hopes of finding anyone further alive in the city of Elazig.

Four bodies were found in the city centre, 38 hours after the 6.8-magnitude quake struck Friday evening, bringing the death toll to 36 in Elazig province and nearby Malatya, state broadcaster TRT reported.

Rescuers carefully cleared the remains of the collapsed four-storey building where the bodies were found, using buckets to remove broken material as a sniffer dog was brought to the scene.

Workers were searching for five people still under the rubble. Interior Minister Suleyman Soylu said he "still had hoped".

Residents nervously waited to find out what happened to their relatives. A group of women burst into tears when they learned that the body of a relative had been found, while one woman fainted, an AFP photographer said.

Nearby a Red Crescent official tried to calm down another woman whose cousin was missing, urging her to be patient. "We are doing everything we can."

So far, the authorities say 45 people have been rescued alive.

The government's disaster and emergency management agency (AFAD) said 1,607 were injured including 104 still in the hospital.

The story of Syrian university student Mahmud al Osman, who used only his bare hands to rescue a man and woman from underneath the rubble, went viral.

Osman told state news agency Anadolu he heard voices after the quake ended while Durdane and Zulkuf Aydin said they shouted when they saw Osman's telephone light before he and others helped rescue them.

Turkey is home to 3.6 million Syrians in Turkey and although there are limited social problems, tensions have increased following an economic downturn.

There was a growing concern for residents amid the bitter cold, said Hasan Duran, a 58-year-old shopkeeper, who lives in Sursuru.

"If it was summer, people could maybe resist a little longer. But with this cold, it's hard to imagine. Even we are freezing at home. May God give them strength".

Soylu said search and rescue operations had ended in the Mustafa Pasa neighborhood.

President Recep Tayyip Erdogan said Sunday "every effort was made to ensure citizens whose homes have collapsed or been damaged will not suffer in this winter period."

Environment Minister Murat Kurum vowed a "radical transformation project" for buildings in the region at risk in the event of another quake.

The epicentre of the quake was in the small lakeside town of Sivrice in Elazig province and also affected neighboring cities and countries.

With a population of around 4,000, Sivrice is located south of Elazig city on the shores of Hazar lake -- one of the most popular tourist spots in the region.

The US Geological Survey said the magnitude was 6.7, slightly lower than AFAD, adding that it struck near the East Anatolian fault in an area that has suffered no documented large ruptures since an earthquake in 1875.

There had been elation on Saturday when Ayse Yildiz and her two-year-old daughter were found alive by rescuers after 28 and 24 hours respectively.

Erdogan had promised Turkey's housing agency TOKI would "make sure no one is left without a home".

Residents avoided returning to their homes because of aftershock fears. They included Mustafa Top who said he would "wait a week while the aftershocks continue and then we'll check (our apartment)."

Since Friday's quake, there have been 714 aftershocks with 20 above four in magnitude.