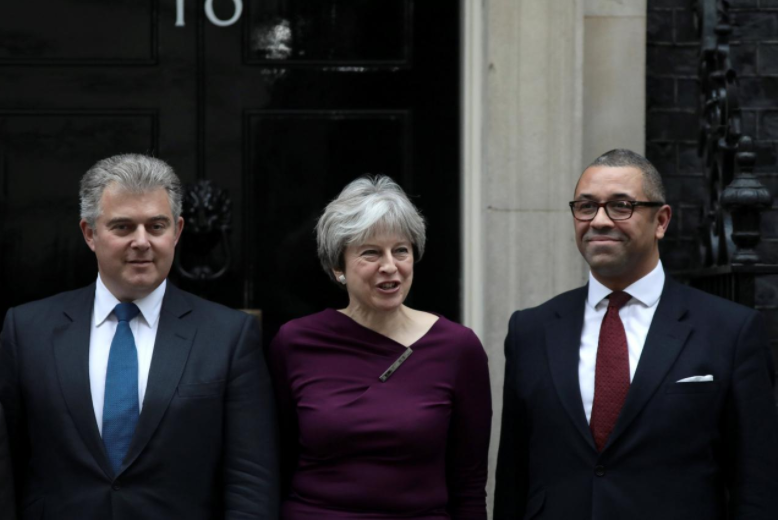 British Prime Minister Theresa May named a new head of the ruling Conservatives on Monday in a reshuffle aimed at handing her government a new start after months of divisions over Brexit, scandals and an ill-judged election.

May, weakened by the loss of the Conservatives’ majority in June’s election gamble, moved to make changes to her team of top ministers after ending last year with a deal to shift talks with the European Union to a second phase.

She kept her team’s ‘big beasts’ - the finance, Brexit, foreign and interior ministers - but is promoting women, black and younger lawmakers to challenge critics who call her party “male, pale and stale”.

Appointing immigration minister Brandon Lewis and lawmaker James Cleverly to become the chairman and deputy chair of the Conservatives was part of her strategy to reassert her authority over the party and to try to broaden its reach.

May is also keen to strengthen her hand in talks with the EU to unravel more than 40 years of union and in parliament, where she depends on the support of a Northern Irish party.

“I‘m not a quitter. I‘m in this for the long term,” May told the BBC on Sunday, a new mantra from a prime minister who has been mocked in the media as a ‘Maybot’ for her dogged repetition of catchphrases and policy statements.

Despite winning agreement from the EU to push Brexit talks to a discussion of future trade relations and a transitional deal, May has been criticized at home for her approach to healthcare, housing and transport among other issues. 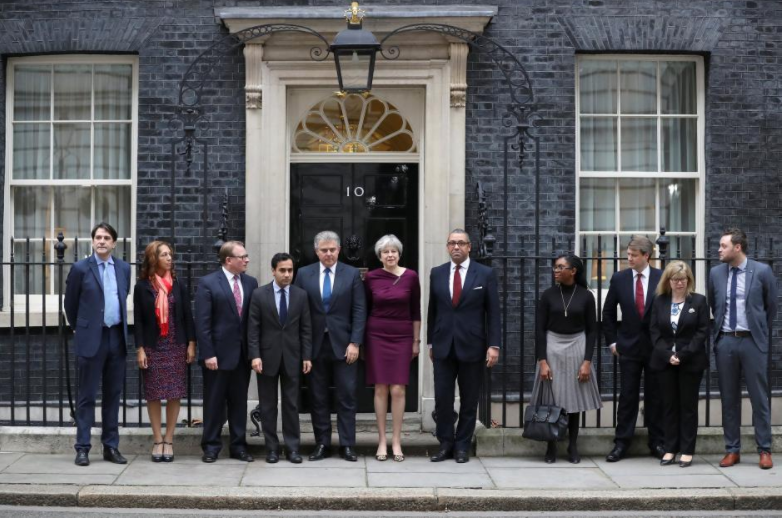 Britain's Prime Minister Theresa May poses with Brandon Lewis and James Cleverly and other members of their teams outside 10 Downing Street, London, January 8, 2018. Photo: Reuters/Simon Dawson

In a blow, her minister for Northern Ireland, James Brokenshire, stepped down because of ill-health.

He had been trying to help officials form a power-sharing government to avoid any return to violence between pro-British unionists and Irish nationalists that scarred the province for decades.

But the biggest change so far was the appointment of Lewis to head the Conservative Party whose membership is plummeting after what many members acknowledge was a disastrous election campaign in June.

The main opposition Labour Party, under the leadership of leftist lawmaker Jeremy Corbyn, is enjoying some of the highest numbers of support in its history.

It will now fall to the 46-year-old Lewis, and new deputy James Cleverly, to provide the leadership needed to attract younger voters and those in northern England if the governing party is to have a chance to win the next election in 2022.

Lewis, who is popular in the party and was a supporter of May’s leadership bid in 2016, will take over from veteran minister Patrick McLoughlin, who had been criticized by some members for failing to broaden the appeal of the party.

“(Lewis is) the type who might have the guts and inclination to take on the party internally and to be a loud media voice to take away the heat from Theresa May,” a Conservative member said. “He’s not usually scared of a fight.”