Hotel that launched Trump to Manhattan fame to be torn down 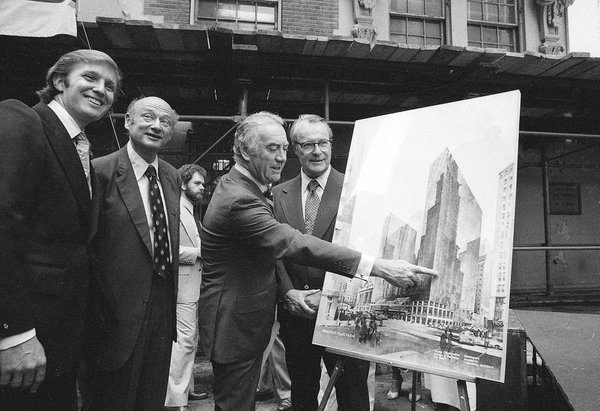 In this June 28, 1978, file photo, New York Gov Hugh Carey points to an artists' conception of the new New York Hyatt Hotel/Convention facility that will be build on the site of the former Commordore Hotel in New York. Corp. (Photo: AP)

The building that helped Donald Trump make a name for himself in his first big deal in Manhattan is being sold to developers who plan to tear it down.

Developer TF Cornerstone said Thursday that it and a group managing billionaire Michael Dell’s money have agreed to buy the Grand Hyatt New York next to Grand Central Terminal and replace it with a mixed-used tower that will include office and retail space and a smaller hotel.

Trump partnered with the Hyatt Corp. to buy what was then the Commodore Hotel in the late 1970s in his first splash in Manhattan real estate. He refurbished it into a sleek glass tower and used its success as a stepping stone to his next big gamble a few years later, the Trump Tower on Fifth Avenue.

Trump sold his stake in the Grand Hyatt in 1996.

Neither the White House nor the Trump Organization responded to requests for comment.

When Trump struck a deal to buy the Commodore from the bankrupt Penn Central Corp., the city itself was on the verge of bankruptcy and most other developers were not interested.

As Trump tells it, he realized there was something special about the Commodore after a walk by the hotel early one morning.

“The lobby was so dingy it looked like a welfare hotel,” he wrote in “The Art of the Deal,” but then his eye caught a hopeful sign. “There were thousands of well-dressed Connecticut and Westchester commuters flooding onto the streets from Grand Central Terminal and the subway stations below. The city was on the verge of bankruptcy, but what I saw was a superb location.”

Eager to make his mark in Manhattan, Trump took the plunge, using guaranteed loans from his father and generous tax abatements from the city.

Within a few years, he transformed the tired, old Commodore into a gleaming, reflective-glass tower. His timing was near perfect, too. He opened the hotel just before the start of 1980s boom and was soon able to rent rooms for as much as $1,100 a night.

In the latest deal, the new building will cover 2 million square feet and include a new Grand Hyatt with 500 rooms. The current hotel has 1,298 rooms.

The deal still requires local and state approval. The land under the Grand Hyatt is owned by the Empire State Development Corp., the state’s business-development arm.

TF Cornerstone’s partner in the deal is MSD Partners, which invests assets owned by Dell and his family. Dell is the founder of Dell Technologies and is estimated by Forbes to be worth $34 billion.