WORLD House delivers one article for 2nd impeachment of Trump

House delivers one article for 2nd impeachment of Trump 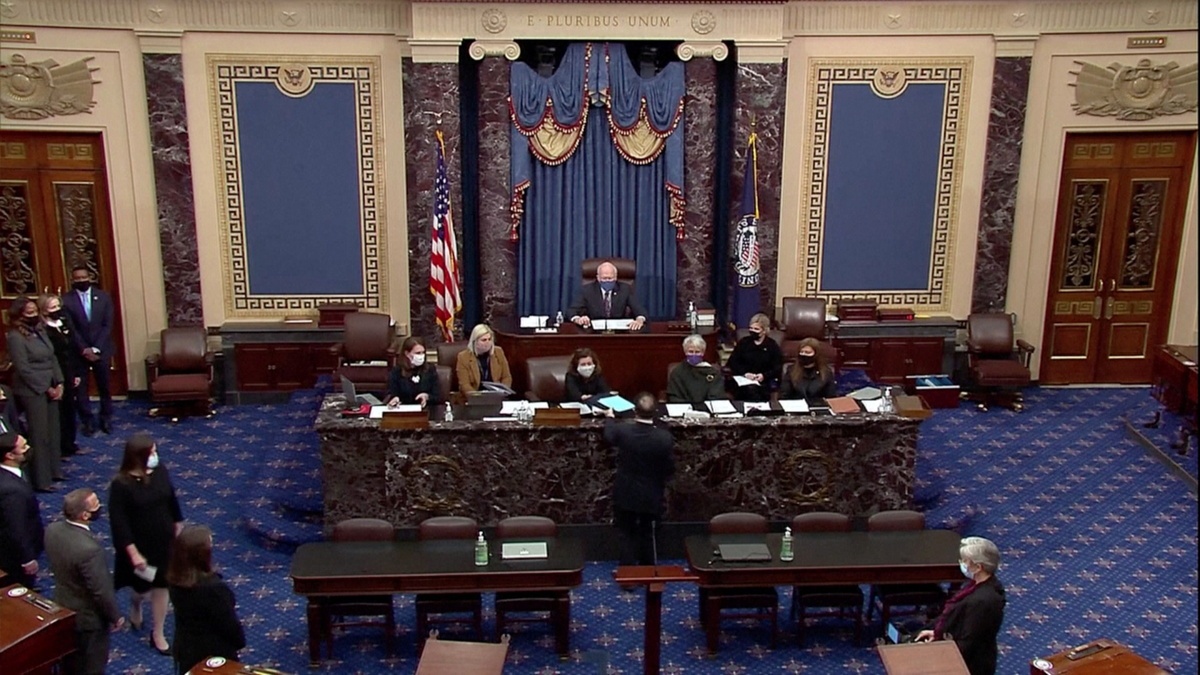 US House lead impeachment manager Jamie Raskin (D-MD) hands over the House article of impeachment against former President Donald Trump on accusations of inciting the Jan 6 attack on the Capitol, on the floor of the US Senate at the US Capitol in Washington, US, Jan 25, 2021. [Photo/Agencies]

For the second time in a year, members of the House of Representatives walked over to the Senate on Monday to deliver an article of impeachment against Donald Trump, now a former president.

The House charged Trump with "incitement of insurrection" over his speech preceding the storming of the US Capitol by his supporters on Jan 6, while Congress was in a joint session to confirm the Electoral College victory of Joe Biden as president. Five people died in the chaos.

Nine House Democrats who will serve as prosecutors in the trial followed the clerk of the House and the acting sergeant at arms as they carried the written accusation through the Capitol Rotunda and to the Senate chamber late Monday.

Trump's trial will commence the week of Feb 8.

In January 2020, Trump faced two articles of impeachment over his actions stemming from a phone call he made to the president of Ukraine, in which he suggested Biden and his son Hunter be investigated over the younger Biden's work for an energy company in Ukraine. Trump, the only president to be impeached twice, was eventually acquitted in the Republican-controlled Senate.

It also was announced on Monday that US Senator Patrick Leahy of Vermont will preside over the trial. Leahy, 80, the longest-serving senator, also holds the title of president pro tempore of the Senate.

Supreme Court Chief Justice John Roberts, who presided over the first impeachment, will not do so on this one, reportedly over constitutional concerns about whether the chief justice should conduct the trial of a former president,

Leahy, a Democrat, also is expected to vote at the conclusion of the trial, which some Republicans questioned on Monday. He said he would take "extraordinarily seriously" his trial oath to administer "impartial justice".

"How does a Senator preside, like a judge, and serve as juror too?" Senator John Cornyn of Texas asked on Twitter.

Cornyn said Trump already has been held accountable. "One way in our system you get punished is losing an election," the senator said.

The Senate is now evenly divided, 50-50, after two Democrats, Raphael Warnock and Jon Ossoff, won seats in a runoff election in Georgia earlier this month. Vice-President Kamala Harris would vote in the event of a tie, which gives Democrats effective control of the chamber.

However, in the case of impeachment, a two-thirds majority of the Senate, or 67 votes, is needed for a conviction.

The mood from Republicans in the Senate is not as supportive of Trump as it was last year, but it would take 17 GOP senators to vote with the Democrats to convict and possibly bar Trump from holding public office again.

"I guess it depends on what state you're in and what phase in your career you are," Senator Lindsey Graham, Republican of South Carolina, told reporters Monday when asked what would happen to Republicans who voted to convict Trump.

The two-week delay in the trial could benefit the former president, as it will be a little more than a month removed from the Capitol siege.

Republican Senate leader Mitch McConnell, who had helped Trump navigate approval of federal judges, including for the Supreme Court, has harshly criticized the 45th president following the uprising in Washington.

Republicans are presenting legal arguments against the legitimacy of the trial and questions over whether Trump's demands to overturn the election amounted to incitement.

"There seems to be some hope that Republicans could oppose the former president's impeachment on process grounds, rather than grappling with his awful conduct," Schumer said. "Let me be perfectly clear: This is not going to fly.

"The theory that the Senate can't try former officials would amount to a constitutional get-out-of-jail-free card for any president," Schumer told the Senate on Monday.

Republican senators also have to weigh the demands of donors who are distancing themselves from Trump and those who remain loyal to him. There also have been rumblings that Trump would consider forming another political party, which could undermine Republican election prospects, but he has not said specifically what he will do post-presidency.

For Democrats, the trial in the early days of Biden's presidency poses a challenge, forcing them to balance their intentions to hold Trump accountable and their desire to deliver on the new administration's priorities.

On Jan 13, 10 House Republicans joined Democrats in voting to impeach Trump and have faced angry opposition from some Republicans who will seek to "primary" them before their next elections in 2022.

Senator Rob Portman, Republican of Ohio, announced Monday that he would not seek reelection in 2022, citing the polarized political atmosphere.